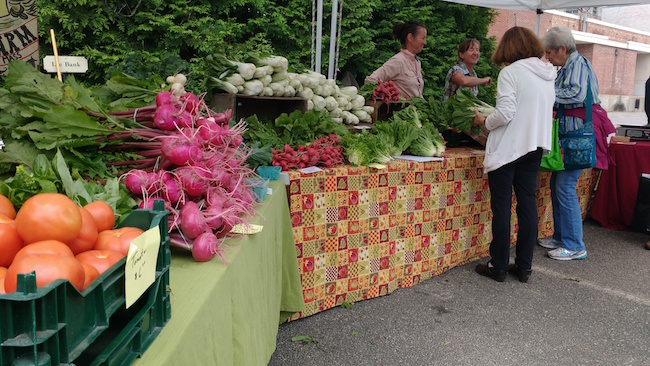 For more than three decades, the town of Great Barrington, Massachusetts, has quietly demonstrated how grassroots, sustainable, and human-centric projects could easily become the building blocks of the next economy. One organic farm in particular has been a shining example of how economic systems that take human and environmental needs into account could uplift communities. The Indian Line Farm combines community-supported farming that provides organic produce to local residents, a community land trust that guards against land speculation, and a community currency that systematically increases regional economic resilience.

In a world where farmers around the globe are in precarious financial positions, commit suicide at shocking rates — higher than any other occupation — and are often forced to compete viciously against each other, this town could hold the key to ensuring greater emotional and financial security for farmers while increasing food security and access to healthy produce for consumers.

Pioneers of the Community-Supported Agriculture Model

Farming is risky because profitability is highly dependent on factors that are out of farmers' control like weather and pests, for example. The community-supported agriculture business model allows members to buy shares in a farm so that farmers do not have to shoulder all the risks alone.

"Community-supported agriculture is a relationship, really," said Elizabeth Keen, one of the two farmers at Indian Line, in an interview. "It's a relationship between farmers and consumers… It is in a sense sharing the risk and also sharing the bounty that can exist on a farm." The community-supported agriculture model improves access to high-quality produce, enables farmers to stay out of debt, builds a sense of community, and ensures the long-term financial viability of small farms.

One of the co-founders of this model in the U.S. is the late Robyn Van En. She was the owner of the Indian Line Farm until her death in 1997. Van En spent much of her time popularizing the community-supported agriculture model. Today, there are over 1,650 of these farms in the U.S. alone, according to data from the Robyn Van En Center at Wilson College in Chambersburg, Pennsylvania, and thousands more globally.

Van En is honored on the local currency — the 10 "BerkShare" note — in recognition of her visionary business model and far-reaching influence. Each week, Indian Line Farm customers use these notes to purchase produce from the farm that she founded. 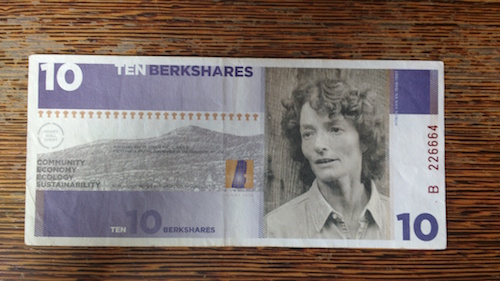 A Local Currency for Great Barrington 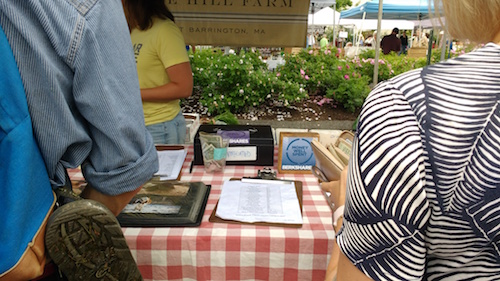 Customers at the farm can pay with BerkShares or U.S. dollars. Photo by Aaron Fernando/Shareable

The currency has been running since 2006, with more than $130,000-worth of Berkshares in circulation. More than 400 businesses in the region accept the currency. Interestingly, one of the co-founders of The Schumacher Center, the organization which runs the BerkShares currency — Bob Swann — was one of the pioneers of the community land trust model in the U.S.

The Benefits of a Community Land Trust

When Van En passed away in 1997, the Indian Line farm went up for sale. The farm was eventually purchased together by a coalition of parties: The Nature Conservancy, the Community Land Trust in the Southern Berkshires, and two young farmers, Alexander Thorp and Elizabeth Keen. This innovative arrangement was fashioned in such a way that the Indian Line farm would continue to produce organic food for the community in perpetuity.

The Community Land Trust model enables communities to use land for long-term sustainable goals like farming and affordable housing, while preventing profit-seeking land speculation that could jeopardize these efforts. By separating the ownership of the land itself (which is usually held by a nonprofit organization) from the ownership of any property on the land (which is held by individuals), the land essentially gets taken off the market.

Yet the Indian Line Farm goes a step further by ensuring that the land continues to be used for a specific purpose — agriculture. "We own the buildings and theoretically if we ever wanted or chose to leave, we could pick up those buildings and put them on a trailer and drag them away. Or we could sell them to a future farmer," says Keen, one of the farmers. "That is written in our lease — that the farm in perpetuity would need to be farmed, which is an incredible opportunity for any future farmer, but it is a resource that will stay that resource forever." 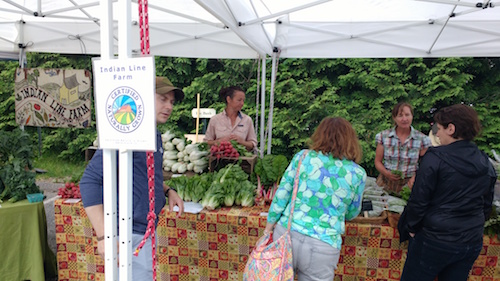 The community-land trust model in the U.S. was also pioneered by Slater King, a civil rights activist in Albany, Georgia. King and Swann aimed to secure 5,000 acres of farmland for African-American farmers. Along with their collaborators, they created this model for social reasons. "They came to understand that one of the primary reasons for war was the commodification of land," Susan Witt, executive director and co-founder of The Schumacher Center, said. "Those that had ownership of land could benefit from other's needs without even doing any work. It created the illusion of value where no value had actually been created…  by collecting rents."

"They also came to believe that the creation of currency by nation-states gave nation-states the ability to finance war that was unprecedented and uneconomic," Witt said. The Indian Line Farm — and the town of Great Barrington — show that by challenging existing notions of land ownership, currency, and consumption, communities can take the lead and be successful in creating sustainable and long-lasting social and economic systems.

Aaron Fernando is the Marketplace Coordinator for Ithacash, a currency in Upstate New York. Header photo by Fernando/Shareable