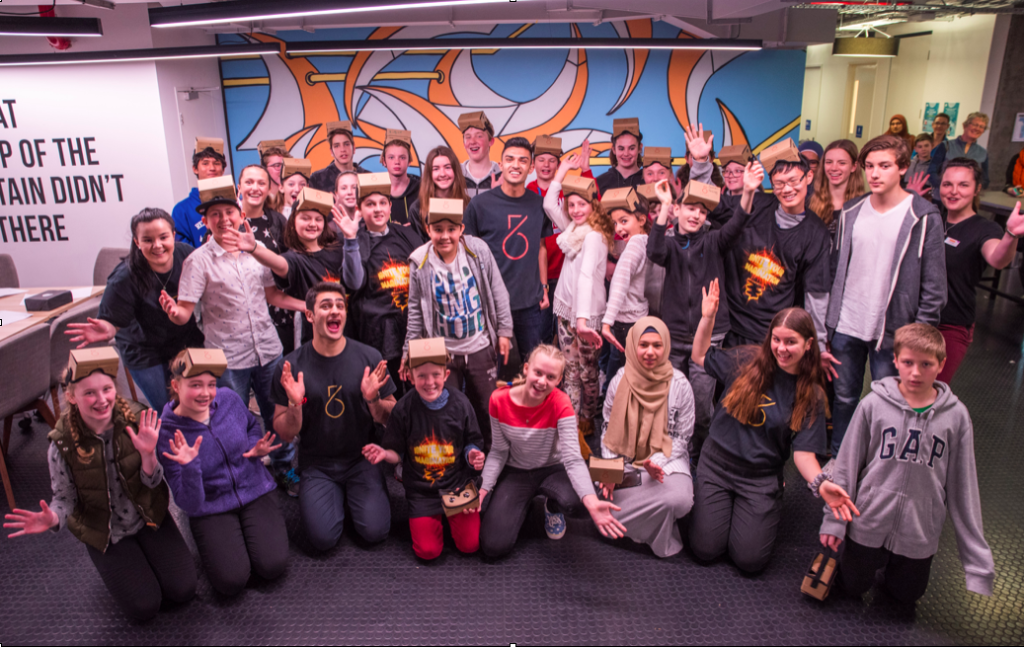 Coworking spaces are increasingly becoming drivers of social change. Various coworking spaces around the world are deciding to take on a greater role in the communities they inhabit by launching scholarship programs, offering space for local groups, and hosting public lectures. Below, we'll introduce you to six spaces making a difference in their communities. If your space should be on a list like this, let us know.

AllGoodWork is not a single coworking space, but rather a nonprofit that works with a number of New York-area coworking spaces to offer unused space to organizations working to make a difference. "The idea is to partner with coworking spaces who have extra seats and fill those seats with social impact organizations," says founder Nate Heasley. "Local nonprofits go through an application process and pay AllGoodWork a coordination fee, which is then invested in the running of the organization."

"We support a really interesting mix of orgs everything from groups that work with asylum seekers here in New York to overseas NGOs like Train of Hope, which brings a medical clinic on wheels to remote areas of South Africa," Heasley says. "We start with filling seats and helping organizations reduce their overhead long term, and we want to eventually create the largest coworking community of social impact organizations in the world. If every coworking space in the world donated one seat, we could support over 100,000 social impact organizations, and that’s our ultimate goal."

Co+hoots was founded by Jenny Poon and Odeen Domingo, two Phoenix entrepreneurs in search of community, at the height of the last recession. "We started in 2010… and there was no coworking in Phoenix at the time," says cofounder Jenny Poon. "We thought about the city and how we could have a greater impact… and for the first few years, we did fun side projects once a month or once a quarter," including pro bono days for nonprofits working on web development and coding events for youth. "In 2014 we launched a nonprofit and really focused on multiplying this effect," Poon says.

The nonprofit has four main programs, including a three-day annual business boot camp for teens. Half of the student participants are on scholarships and at least 40 percent are young women. There are also lunch-and-learn sessions for entrepreneurs open to members and non-members, and advisory sessions which offer entrepreneurs the chance to meet one-on-one with legal and marketing experts. "Our most recent program is called Equity at the Table, where we discuss what the face of entrepreneurship should be and who has access, and we organize dinners connecting established and emerging entrepreneurs," says Lisa Glenn, executive director of the Co+hoots foundation. "If you have high unemployment (in your community), the best opportunity for you may be to create your own," Glenn says. "We want to be the place where entrepreneurs can give back to the newest and biggest wave of the workforce." 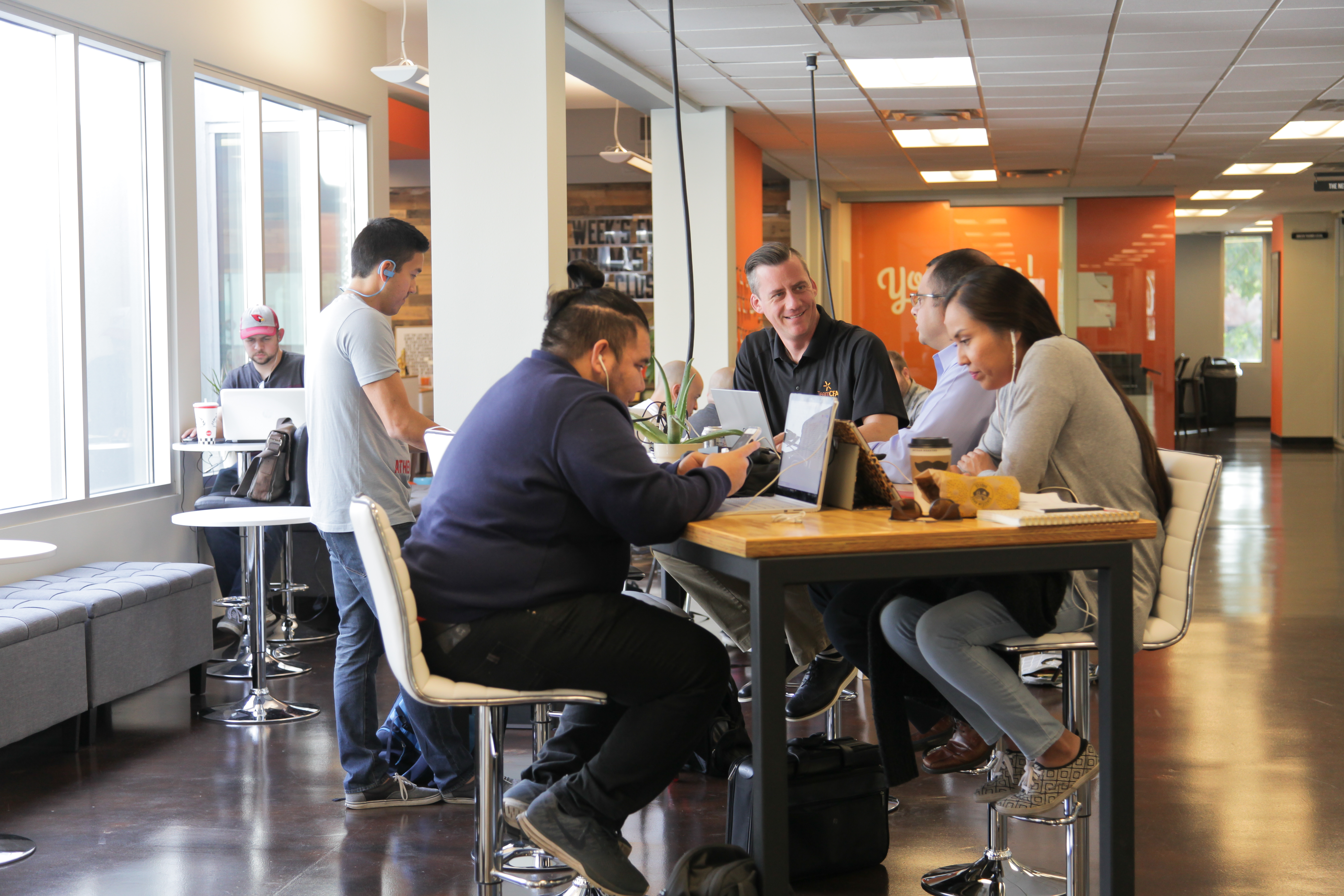 Minneapolis-based advertising executives Erinn Farrell, Alex West Steinman, Bethany Iverson, and Liz Giel dreamed of making magic happen for their fellow female entrepreneurs. The result was the Coven, a relaxed, intergenerational coworking space for women and non-binary-identified people. For every five memberships sold, one is given away to a low-income or otherwise marginalized woman. "We're all very passionate about social justice, and… we found that regardless of industry or age, a lot of women's experiences were similar, whether they were librarians or lawyers or whatever," Farrell, chief operating officer of the Coven, says. "We knew what kind of magic could happen if we created a space designed for women and non-binary people."

The space hosts members-only panels on everything from body positivity to the tax code and organizes monthly events open to people of all genders; one event raised $16,000 to bail out impoverished, imprisoned women in Minneapolis.

There are no offices for rent in the Coven — the "relaxed, lounge-type space," as Farrell describes it, enables people to mix. "We represent dozens of different industries and cultural backgrounds and people who are at different positions in their career. half entrepreneurs and half 9-5ers using it as a connection and meeting space. We want (members) to get insight from a number of industries and experiences," says Farrell. "Women are often pitted against each other as if there was only space for one at the table. We feel that there doesn't have to be this competition between women. We believe we can create welcoming and inclusive spaces." 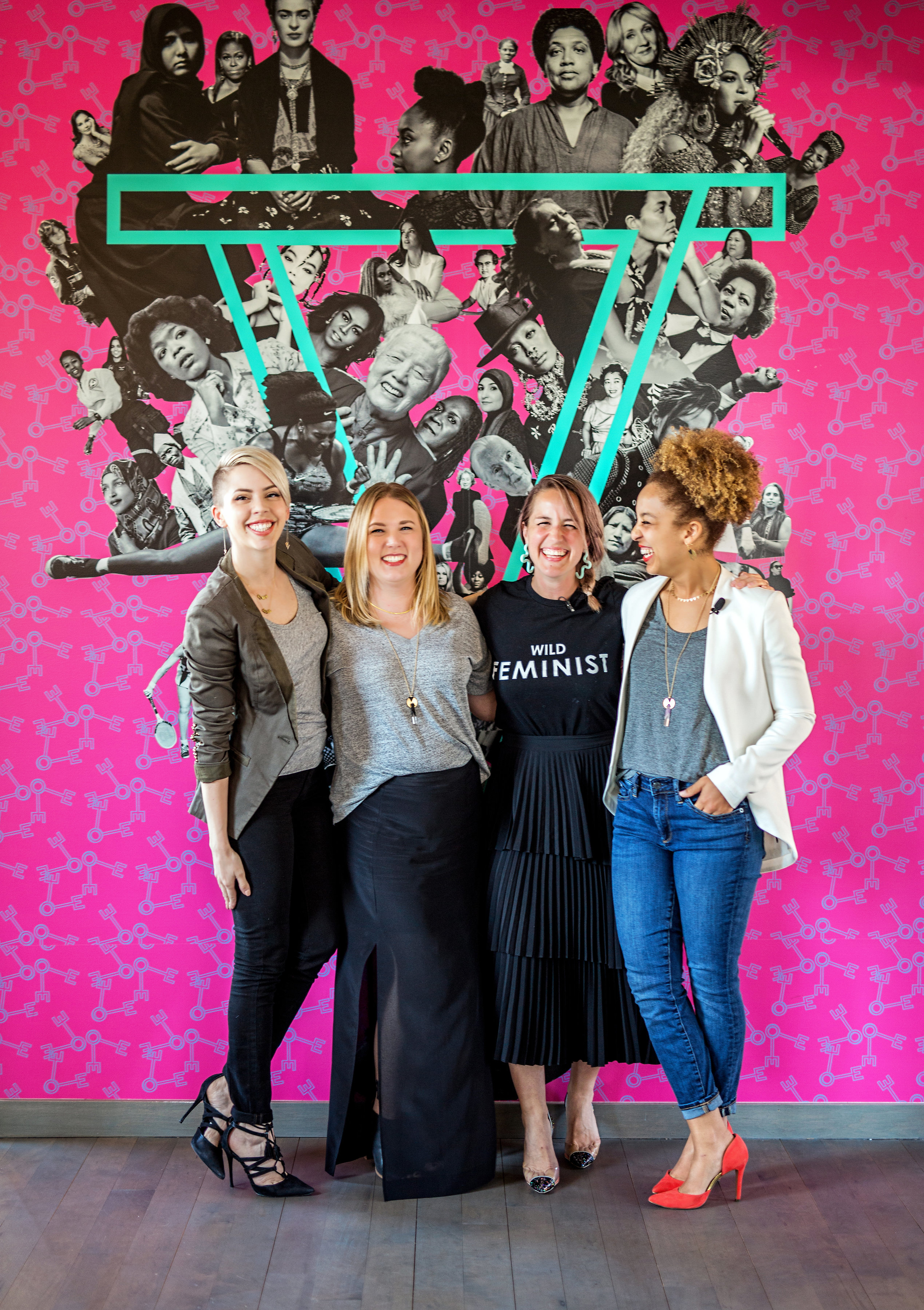 When Scott Tillitt moved to the small town of Beacon, New York, in 2006, the area was just getting back on its feet after years of industrial decline, largely thanks to a new world-class art museum. The Beahive was born in 2009. "I had done communications for social impact organizations, and I wanted to translate that into more localized community impact," says Tillitt. "The Beahive has a pretty typical coworking membership — lawyers, consultants, designers, writers, telecommuters — but community engagement is part of our DNA." A 2013 TedX event around entrepreneurship and a 2017 "Main Street Summit" bringing together businesspeople and community leaders to discuss issues of development and gentrification are just two of the bigger events the space has hosted over the years. The Beahive space has been offered to environmentalist groups, coalitions of nonprofits, Planned Parenthood, and the local chapter of a group called Showing Up for Racial Justice. In the early days, there were also more casual events like yoga classes and community movie nights. "When we started in 2009, we were at the bottom of the recession and businesses were disappearing," he says. "One thought behind opening the Beahive was to bring more vibrancy back, but now there’s a lot more of that, and a lot more places to go."

However, giving residents a place to interact remains part of the space’s key mission. "I love going in to Beahive and seeing people make use of it and have conversations and human interaction that wouldn’t be happening as deeply online, at home or in a coffee shop," Tillitt says. "Actually, we just had our first Beahive baby." 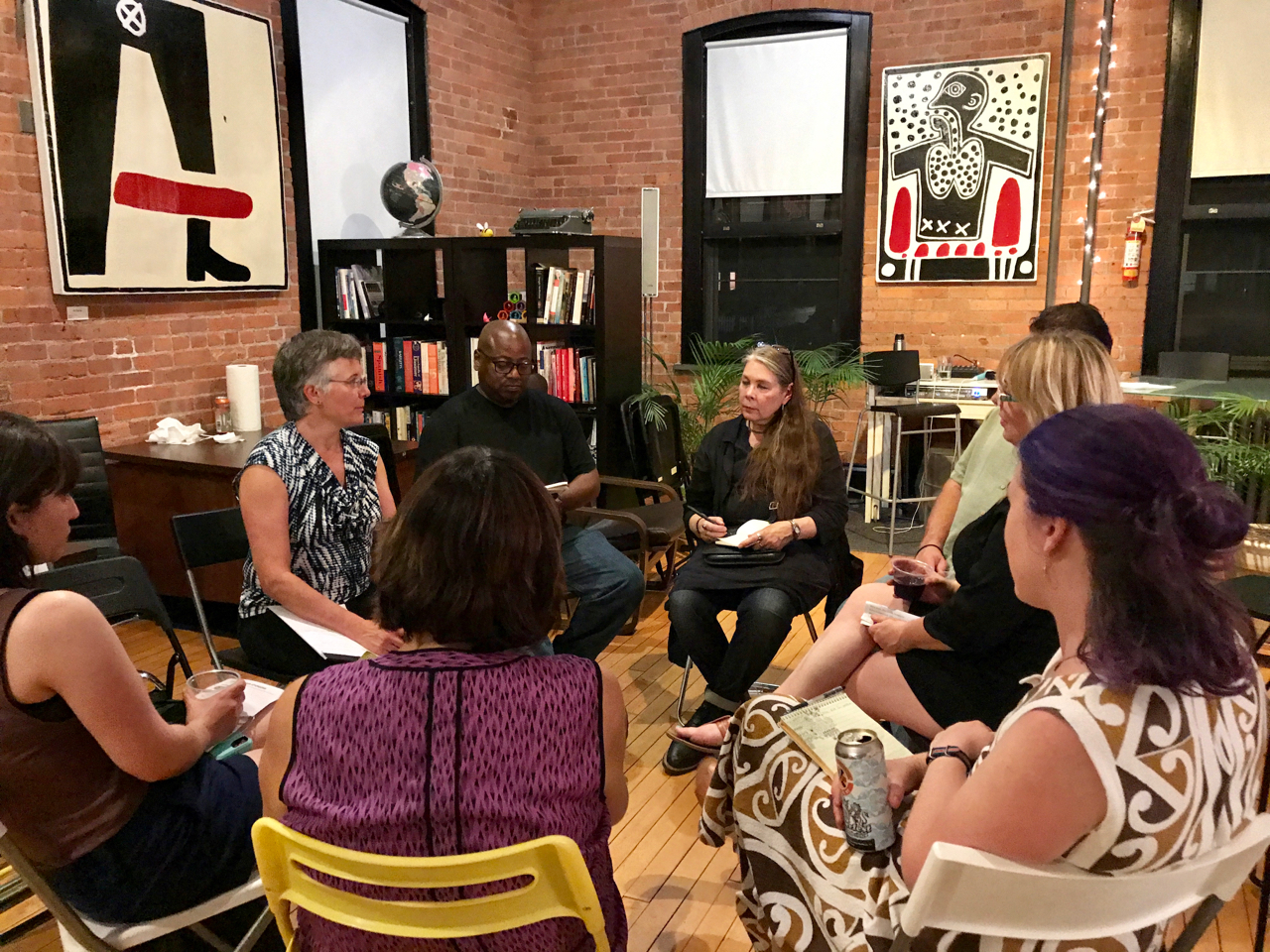 Photo courtesy of The Beahive

Spacecubed in Perth, Australia, describes itself as a "social enterprise, supporting tailored coworking and office spaces, events, programs and a curated community of small businesses, sole traders, corporates and entrepreneurs." Spacecubed has made a name for itself with innovative support programs for entrepreneurs and women in tech. The space’s annual "WebGirls" workshop attracts increasing numbers of women interested in learning more about tech.

"We wanted to create a lighthearted event that provides a taster of technology, where there is a bit of coding education and also a yoga session in the middle of it… we try to balance the fun aspect with the coding and create a no-barrier environment for women wanting to get a sense of what it's like in tech," says impact manager Chandra Sundareswaran.

Hackathons bring coding into schools, and rotating scholarship program called Intensify allows aspiring entrepreneurs of varying ages and genders to use Spacecubed space for three months to work on a socially beneficial project at no cost and consult with mentors and experts. Spacecubed also uses the web conferencing tools at its disposal to mentor business owners and entrepreneurs in rural Australia. "Our goal is to support 100,000 entrepreneurs and changemakers by 2025," says Sundareswaran. "That's why we want to focus on working in the regions and working with students. We know the future of entrepreneurship is not going to be 30-somethings in big cities. It's going to be people in smaller towns or kids in school." 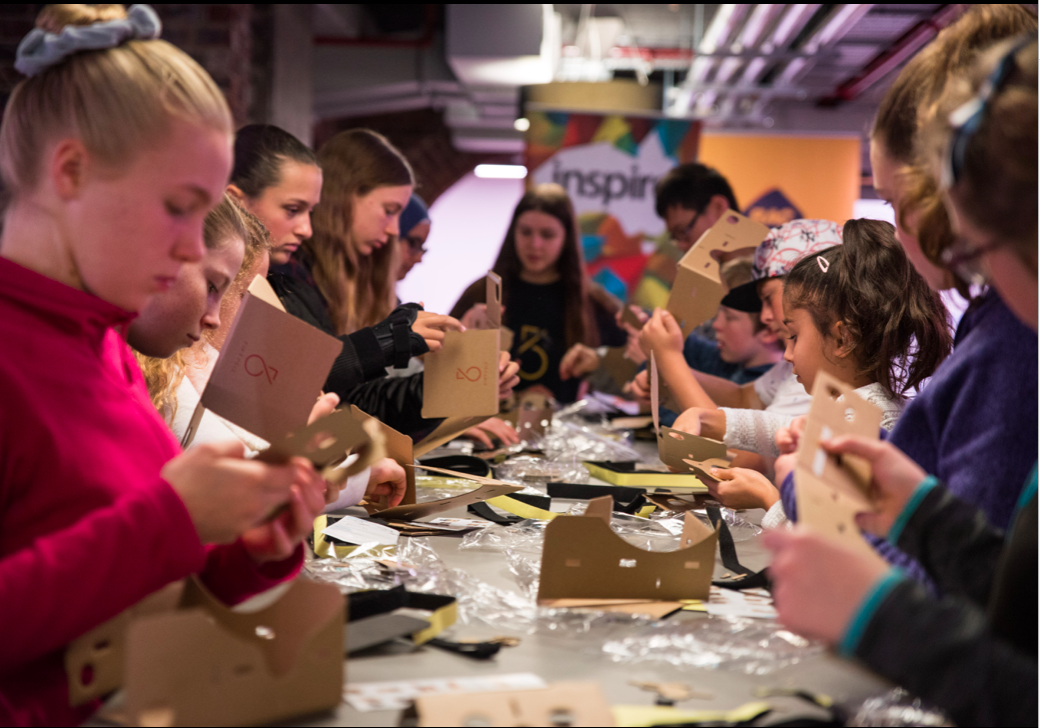 Until this year, residents of Vancouver's Downtown Eastside didn't go near the imposing building at 312 Main Street unless they had to. From 1953 to 2010, the building was the city's police headquarters. Afterward, it sat empty for several years. Now, a group of committed community activists based in and around the Downtown Eastside is transforming the space. The refurbished space, which is still being renovated as members gradually move in, will house a coworking community, production and exhibition spaces for local artists, office space for larger community organizations, and a ground-floor community center, open to all, with Wi-Fi, a café and public washrooms. Organizers aim to democratize coworking and provide an accessible space for freelancers and entrepreneurs of all cultures, genders and income levels, as well as employment opportunities for residents of the historically deprived neighborhood. Profits earned by the organization will be reinvested in the running of the space.

"For some people in Vancouver, the Downtown Eastside is that place you don't want to go," says executive director Ashley Proctor, who lives in the area. "For a lot of people, it's known as the epicentre of a huge opioid crisis, with high rates of poverty. But there are also a lot of service providers, community organizations and people who care very much about this neighborhood." 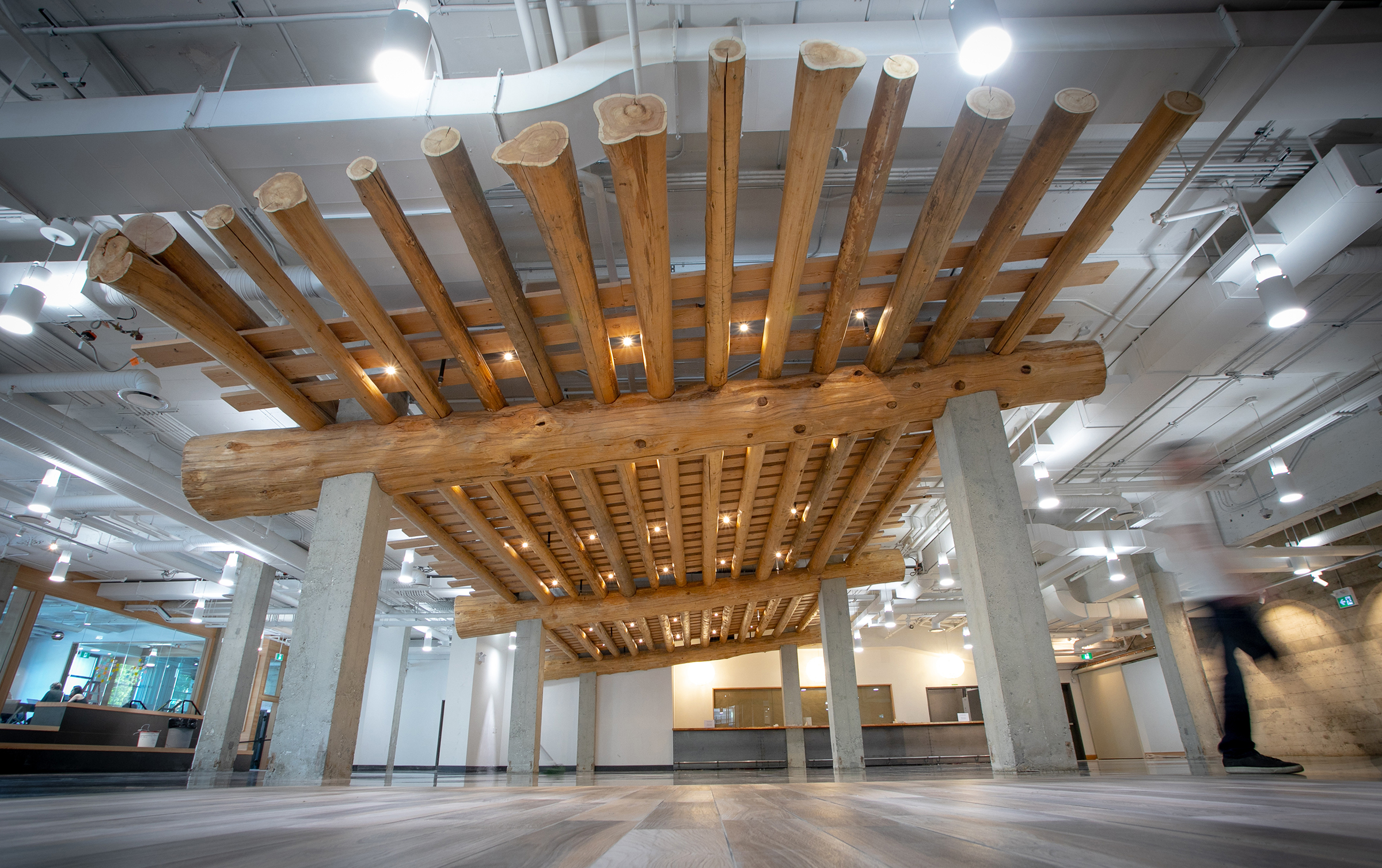