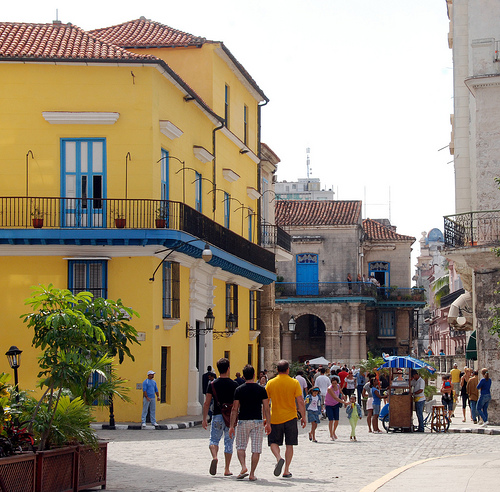 There are countless reasons why we love cities, many of them admirably linked to the environmental advantages and sense of community that arise when people live in close proximity.

Yet they also fascinate us for reasons that are less virtuous, but which help explain the enduring appeal of urban life through the centuries. Cities, in short, are sexy.  The seductive quality of some places fills us with longing in the same way as a wink from an attractive stranger.

What is it exactly that quickens our pulse in Rio and deadens our senses in, say, Oklahoma City? No one knows for sure, and some folks will no doubt jump up to defend Oklahoma City as a saucy hot spot.  I can’t speak with any authority about Oklahoma’s capital city, but let me share my theories on urban allure that first took shape on an eye-opening trip to Montreal when I was 23.

Sexiness, at least for cities, depends on subtlety.  Las Vegas tries too hard to be naughty while Hollywood and South Beach shout glitz and glamour rather than whisper enchantment.

Montreal, in my experience, takes your breath away with a relaxed sense of stylishness found in its streetlife, nightlife and just plain life. A libidinous form of languor permeates the place—a resounding rejection of the purposefulness that weighs heavily upon Anglo-Saxon culture.  I have felt something similar in New Orleans, San Antonio, Buenos Aires, Havana, Rome and Athens. A sense there’s something that stirs our souls more than just chalking up long lists of accomplishments.

Although I can be as self-absorbed as the next blogger, I feel this subject is too important to leave totally to my own experiences. So I sought the advice of authorities in the field.  I don’t mean Don Juans or ladies of the night, but travel writers.

David Lansing, in a 2008 story for National Geographic Travelerdeclared Perugia, Italy, “the World’s Sexiest Small City.” His criteria, developed with an old college chum over several whiskeys, seems solid: “A sexy city we agreed should be seductive but not garishly provocative, revealing its secrets slowly; it should be classy yet able to please all your senses.”

Helen Lawrenson, a spicy essayist of the 1950s, picked Havana as “the Sexiest City in the World” for Esquire magazine in the days prior to the Cuban Revolution.  She lines up with me that the essence of a seductive city is the absence of a programmed way of living.

“It is a place where nothing ever happens according to plan, but anything else can happened and usually does,” she enthused about Havana.

Kaid Benfield, a prolific blogger about cities on the Natural Resources Defense Council’s Smarter Cities website, takes a slightly more rigorous approach by cross referencing recent lists of the world’s most romantic cities—sexiness by another name.  Prague, Venice, Rome and Paris wind up on each of the three lists he studied (Lisbon and Vienna appear on two).

He then explores what these four cities share in common:

-A strong sense of place

-Traditional neighborhoods enriched by parks and a sense of community

That closely parallels my own definition of what makes a great city in terms of community and sustainability.  It turns out that sexiness is more a virtue than a vice afterall.