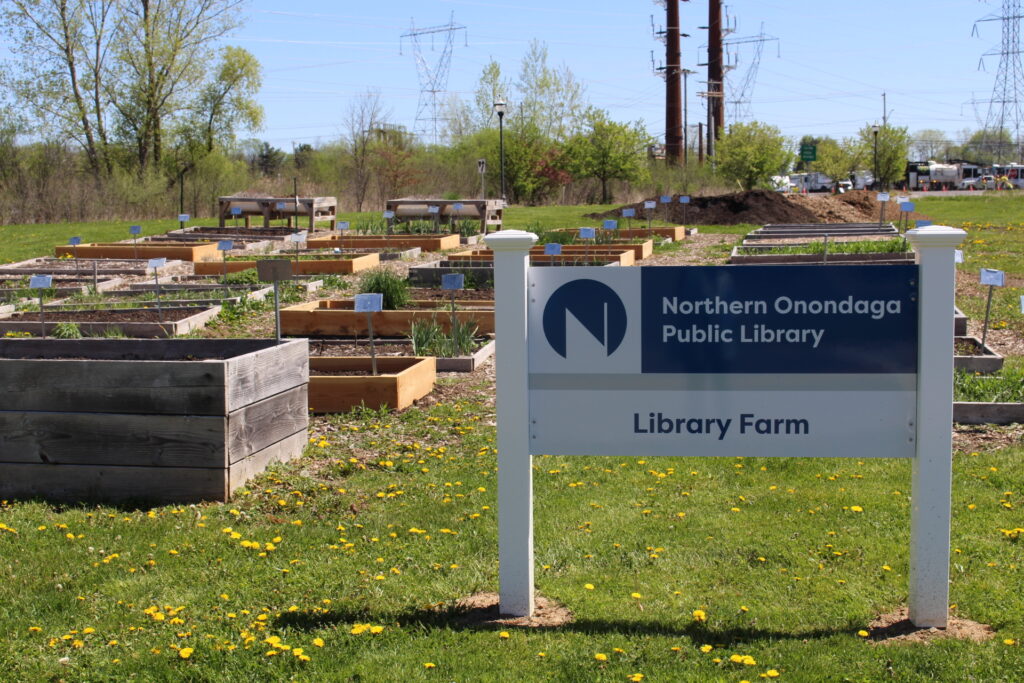 With food costs at near-record prices, the idea of growing your own food has never been so attractive. But food production requires space, and space can be a precious commodity — even a rarity — for people who live in urban areas. For decades, communities in cities around the U.S. have created urban farms and gardens. These spaces make use of empty lots to grow low-cost produce or flowers for communities. These urban farms are not always in high-profile or easily accessible places, however.

Building a farm at the library

But, what if your urban farm was in a central location? Perhaps your local library? The Cicero Branch of the Northern Onondaga Public Library (NOPL) in Upstate New York has explored precisely this question. In 2011, they created the Library Farm — partly the brainchild of Meg Backus, then the adult programming director and public relations coordinator. According to Sue Buswell, the current Library Farm manager, Backus saw the vacant, library-owned land across the street as an agricultural experiment. In the beginning, about 40 members of the library went across the street with their own water, seeds, seedlings, and other growing provisions to investigate whether that land could produce. They found that it could.

“The ground was part of a farm that was on that land at some time in history, so it was still kind of fertile and we had great success,” Buswell said. “[The library] started not only giving us the land to grow on, but the adult [section] librarian started doing programs about gardening and such.”

As gardening programs became more popular at the Library Farm, it became more obvious that material resources, like water, could no longer be supplied solely by members. An improvement project designed to provide water directly to the garden highlighted an unforeseen issue: the location of the original garden plot was not, in fact, on library property. Instead of allowing this to be a setback to the Library Farm’s growth, the members of the farm project decided to pivot the space and simultaneously modernize it. After moving the farm about 50 feet away from its original location, Buswell explained that they then raised the planting beds and further expanded Library Farm programming. More programming, however, requires even more resources.

Growing a garden and a community

Urban farms require seeds or seedlings, mulch, compost or fertilizer and water. As by this time the agricultural scope was well beyond being able to rely solely on members’ resources, the Library Farm began forming partnerships with organizations in and around Onondaga County. They partnered with Syracuse Grows, a local non-profit that supports urban food production, to receive seeds and seedlings, and the Onondaga County Resource Recovery Agency which began donating compost and mulch.

Buswell also noted that local politicians have provided grants for infrastructure such as pergolas to shield gardeners from the sun as they work. Donations and grants also supplement what the gardeners grow, ultimately producing crops for both sale and donation. The donations, in particular, allow the Library Farm to perform a community service throughout Onondaga County.

“We got ourselves associated with a couple of food pantries,” Buswell said. “All the vegetables grown in [our] community area we donate to the pantries that are in our three respective areas where the libraries are.”

Donations of supplies allow the Cicero Branch of NOPL to annually provide over 200 pounds of fresh produce for the food insecure in Cicero, as well as the other two branches in Brewerton and North Syracuse. This type of community engagement is what draws NOPL members to the Library Farm. Lauren Rosenstein, a social worker and longtime NOPL member, explained that contributing some of her time to the pantry planting beds felt like an important community service.

“[Helping] water the pantry plots one day a week, I knew we were playing a role in the greater community,” she explained.

You’re really making a difference as a local community because you’re growing the food that people are eating. — Lauren Rosenstein, NOPL volunteer

In the process of helping the greater community, and adding some free produce to her own pantry, Rosenstein found that she also picked up a wealth of gardening knowledge. She mentioned that she “knew nothing about gardening,” when she began with the Library Farm, but that soon changed, and she is now able to answer all kinds of questions from people passing by the gardens.

Being able to answer gardening questions made Rosenstein realize that she “really learned a lot in the past year.” Her knowledge base — and that of the other gardeners — grew in a variety of ways. At first it was simply the volunteers learning from each other. Rosenstein noted that those coming to the Library Farm entered with mixed levels of expertise. Some were total novices, while others came to the Library Farm having completed Cornell University’s Master Gardener Program. Sharing tips among the Library Farm members helped newer gardeners learn more rapidly.

Members also benefited directly from the fact that Library Farm is situated in proximity to a public library. Rosenstein recalled that when she first started she “checked out a ton of books on gardening”. Reading these books as she began her gardening journey equipped her to take agricultural theory and “put it into action.”

Beyond bibliographic resources, the Library Farm also conducts immersive events like “Tea Time in the Garden” and Open Farm Tours, to give the community the chance to learn how to be better gardeners and ways they can use their newly harvested produce.

Here for the long run

As a member of Syracuse Grows, the Library Farm also opens its events to all members of that organization’s network. Sarah Brown, chairperson of the Syracuse Grows board of directors, explained that this is a “really great partnership” as it improves urban gardening throughout the Syracuse metropolitan area. Of the 27 member gardens in the Syracuse Grows’ network, the Library Farm is one of two that operates through a public library. This makes its operations a bit unique, but also potentially more inviting to possible gardeners.

The location is really beneficial for long-term sustainability of a garden. In terms of bringing people in, so many people use the library and I think that really helped create visibility of the garden. — Sarah Brown, chairperson of the Syracuse Grows board of directors

This is one of the reasons that Brown thinks the Library Farm is here to stay. Its ability to incubate gardening expertise throughout Onondaga County makes it vital to the community. Additionally, its creation is an example of how one idea can become transformative if the community is behind it.

“This is as grassroots as you can get,” Buswell said. “We saw the grass and we decided we could garden there.”

Chad Small is a New York City based freelance reporter who principally covers community-led and policy-driven solutions to the climate crisis, as well as the economic, social, and public health

Chad Small is a New York City based freelance reporter who principally covers community-led and policy-driven solutions to the climate crisis, as well as the economic, social, and public health effects of Environmental Racism. His work has appeared in Grist, Gothamist, Reasons To Be Cheerful, and other publications. He is a Data Fellow at Grist, and a former New Economies Reporting Project‘s Finance Solutions Fellows with the New Economy Coalition. Follow Chad on Twitter to see more of his work.