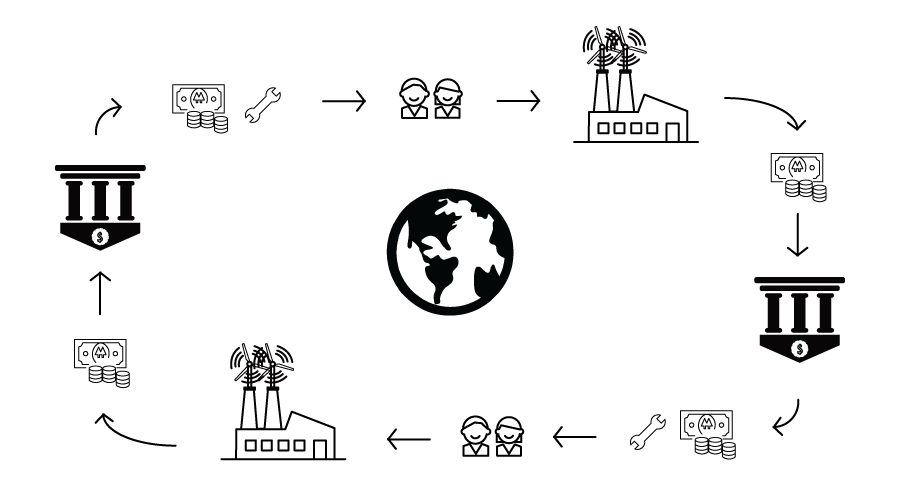 As more and more consumers get savvy about where they put their money, how do cooperatives expand their supply to meet the demand? After all, worker-owners each have a stake in the co-op's future and a vote on the co-op's decisions. And that can be a problem if a business needs to secure a bank loan in order to scale up operations. Individuals within the group can't—and shouldn't—be singled out as loan applicants.

Enter the Working World, a financial services organization that invests in worker- and community-owned operations using the principles of non-extractive capital that eschews collateral and ties "loan returns to project success to minimize risk, both for our fund and the enterprises we help thrive." Businesses "based in and built to serve low-income neighborhoods" are the Working World's specialty, and loans are repaid from income generated by expanded operations. In a nutshell: no profits, no pay back. Though the Working World has a $5 million loan fund, it isn't trying to get rich off the labor of its loan recipients. In fact, it's a non-profit, with a revolving door of capital investment and repayment.

After getting a start in Argentina in 2004, the Working World has established a Peer Network of 27 locally controlled funds that support worker co-ops in New York, Chicago, Spokane, Los Angeles, Baltimore, and other cities in the U.S., as well as across Argentina and Nicaragua. The Working World will even help a business form as or convert to a cooperative model, or partner an existing co-op team in the Peer Network with an emerging one that needs some expertise.

Further still, while non-extractive capital managed by a financial cooperative is clearly still the exception, the Working World aims to make it the rule by fostering regional hubs around the world that can fund co-ops within their commmunities. As each local fund grows through loan repayments and capital investments, it can lend bigger and bigger sums, where appropriate.

One such hub is happening in Baltimore, after the folks at Red Emma’s Coffeehouse partnered with other local co-ops an advisor from the Democracy at Work Network and some sharing economy attorneys in the Baltimore Roundtable for Economic Democracy (BRED). Additionally, the Southern Reparations Loan Fund and the L.A. Co-op Lab are also early entrants in the field. These local groups will work in tandem, initially, with the Working World, though loan payments will stay within the hub groups to be portioned back out to other cooperatives.