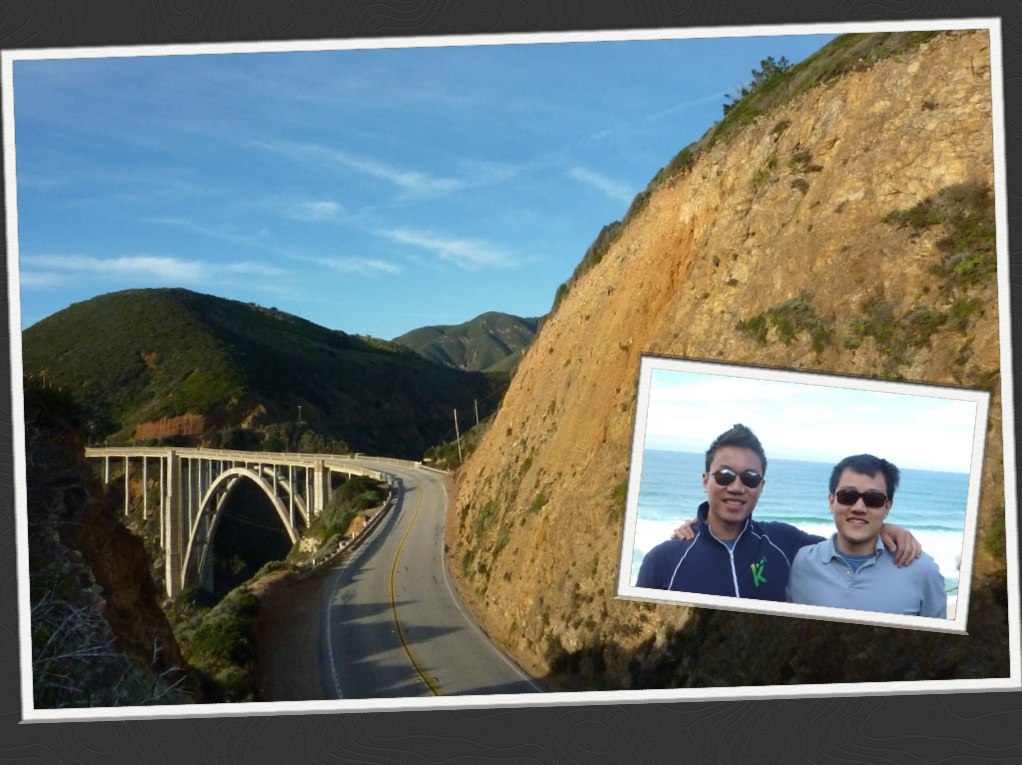 This is adapted from a talk Jason gave at a meetup cohosted with Crowdflower on May 13, 2012.

I’m one of the co-founders of Ridejoy, a community marketplace for friendly people sharing rides.

Our goal at Ridejoy is really to make rideshare a viable and widespread form of transportation for people across the country.

I think that hearing how and why people start organizations is fascinating because it often stems from personal stories and experiences. For me, starting Ridejoy was, in part, an extension of my passion for roadtrips.

Roadtrips are as old as automobiles. Few things convey the sense of freedom and adventure as grabbing a buddy, tossing a few bags in the trunk and hitting the open road toward a faraway destination. The roadtrip is a quintessentially American pastime.

Of course as planes became an affordable form of transportation, people began weighing the pros and cons of 10 hour drive against a two-hour flight. But even still, today Americans take over 2.3 billion long-distance car trips, with nearly half those trips being over 200 miles.

I thought it’d be interesting to see snapshots of Ridejoy’s formation as told from a series of roadtrips that I’ve taken along the way.

The first roadtrip in this story comes before Ridejoy had even formally been established. I was still working at my last job doing sales and marketing at an ad tech company, when my good friend from high school, Steve, reached out to me. He was nearly done with medical school and had one week between classes and rotations that was totally free. Steve was studying in New York and had never been to California (we both grew up in Boston) and he was wondering if I would be free to hang out if he came to visit San Francisco.

“Why stop at San Francisco?” I told him, “If you come out, I’ll take a week off and we’ll do a big road trip so you can get a full tour of Cali!”

We drove up to Napa, got a tour of wine country, and took a slow, meandering two-day trip down to Los Angeles. We pulled over numerous times to explore the California coastline, climb dirt mounds, take photos and just enjoy the fresh sea breeze. If you ever get a chance to drive down Route 1, I would definitely recommend you take it — it’s breathtaking.

We talked about many things on that trip – girls, careers, family. I told Steve about how I was talking to my roommates Kalvin and Randy about starting a startup and how we had begun brainstorming ideas and preparing our application to Y Combinator. Little did I know where those conversations would take us.

Fast forward a few months. We had been accepted into Y Combinator, excited to start something new and had settled on making our startup about long distance rideshare. We wouldn’t launch anything until August 1st and so our days were spent talking to potential users and building out a foundation for the product.

Every Tuesday, YC would hold a dinner with a successful entrepreneur or prominent investor and Kalvin, Randy and I would leave our San Francisco apartment, which doubled as our office, pile into Randy’s beatup Toyota Corolla that was almost as old as we were, and make the drive down 101 to the Y Combinator offices in Mountain View.

Sometimes we were able to dodge traffic, sometimes we got stuck in it, but it never really mattered because we would use that time to plan and strategize. We spent our car rides debating what features we ought to build, who our users were and what they really wanted and brainstormed distribution strategies.

In addition to internal brainstorming, we also used the trip to make friends. We would always post on the YC email list about our ride and gave rides to a number of different people. We inevitably would become good friends with them over the course of the trip.

My cofounder Kalvin had previously gone to Burning Man, the massive festival that occurs in the desert of Nevada each year and we decided it would be an awesome event to launch Ridejoy. BurningManRides.com went live on August 2nd as a gift to the Burning Man community to help folks rideshare to the Burn.

Thanks to the incredible support of the Burning Man community and its organizers, the site grew quickly over the next few weeks and we ultimately signed up over 1600 people who posted over 1200 rides to the festival. At the last minute, we decided to go ourselves and used the site to find rides.

I was the last one to leave the apartment. Imagine this, it’s Sunday night and both my cofounders and roommates had left the apartment. I'm getting ready for my first "true" rideshare with a guy who called himself "Billtron" to go to a festival that was held in the middle of the desert where there's essentially no cell reception, running water or electricity.

I was perhaps a tiny bit nervous.

Eventually a white van pulled up on my street and Billtron emerges to help me load up my stuff. The entire trip was an adventure, like when we turned around in Sacramento because Billtron forgot to grab the giant "psychedelic bunny head" which you would place over your head like the top of a mascot suit and follow the instructions sent to you via the wireless transmitter.

So part of this road trip involved helping Billtron climb up into his friend’s garage and dig around for the head and some other random supplies. We switched off driving duties throughout the night, fueled by Red Bulls and there were definitely some scary moments as we started getting tired and a little drowsy.

Luckily, we made it to the festival in one piece and had an incredible experience. Burning Man definitely shaped the ethos of our company and we aspire to offer that strong sense of community, wonder and adventure that we experienced, to our own users.

By November of 2011, we had completed the Y Combinator program and raised about $1.2M in seed funding from a venture firm called Freestyle Capital (whose partners were Burners themselves) along with some other investors. We were still just a team of three (all founders) and still living and working out of our apartment.

As a burgeoning runner, I had been looking for 10k races to run and found a highly recommended one in Eugene Oregon. We had launched Ridejoy.com a few months prior and had hundreds of rides posted all along the West Coast, and I decided to use our site to find a ride to the race.

I posted my ride request and got connected with Tommy, who was driving up past Seattle to visit a girl. We exchanged something like 50+ text messages before settling all the details. It was a packed car, besides myself, Tommy was taking two other passengers and the four of us jammed into his mid 90’s coupe.

My fellow ridesharers were Zach and Tristan. Zach was originally from Montana but led a pretty nomadic lifestyle. He had been in San Francisco for a few days and was headed now to Seattle, where he’d meet up with his brother before taking off to Mexico to shoot the pilot of a TV series he was trying to launch, tentatively called “Catch of the Day”, a part-travel, part-cooking, part-adventure themed show.

Tristan had spent the past two years in New Orleans as a full-time typewriter poet, in that he literally sat on the sidewalk between the hours of 9pm to 3am Thursday through Sunday and wrote and sold poems for tourists. He had recently gone through a bad breakup and needed a change of pace — after spending some time in the Bay Area, he had found a job in Portland and that’s where he was headed.

We shared a lot of stories on the trip which helped make the time go by. My race went awesome: my Couchsurfing host actually ran the race with me, and I used Ridejoy again to find a ride back home. Critical mass is a key part of making a rideshare community work, and it was very satisfying to see that at least along major routes, we had achieved that critical mass.

The next six months kept me quite busy. By May, we had finally moved the team out of the apartment and grown to five full time, bringing on a community manager (Margot) and a designer (Seth). And then Klout and Chevy gave me the perfect opportunity to celebrate our progress with a joyride.

I had won a Klout perk that let me test drive the new Chevy Volt, a fully electric car that also can run gas. I post my ride on Ridejoy and tweeted it out. A few random friends from my network reached out and I ended up taking my friends Abel and Robin for a spin.

We drove down to Half Moon Bay, grabbed some food at a local burger joint in Half Moon Bay and just enjoyed being on the open road. Abel and Robin were both in the tech scene but probably wouldn’t have connected otherwise. My favorite part about the whole trip was actually how simple it was to coordinate. I truly believe that someday there will be many more casual car trips put together via Ridejoy or perhaps another ridesharing service.

So those are the roadtrips that have helped shape and define Ridejoy. If you run the numbers:

I’m sure I’ll be taking more roadtrips in the future. And when I do, I’ll be posting them on Ridejoy. Are you going somewhere soon? Why not bring someone along for the ride by posting your travel plans? After all, the best trips are the ones you share with others.

Jason is the co-founder of Ridejoy, a community maketplace for friendly people sharing rides. He once took a 3-day roadtrip with a friend from Napa down to Los Angeles down

Jason is the co-founder of Ridejoy, a community maketplace for friendly people sharing rides. He once took a 3-day roadtrip with a friend from Napa down to Los Angeles down the scenic RT 1. When he's not delighting users or growing the Ridejoy community, Jason blogs about personal change and trains for races. He hold a BS and MS from Stanford University.