The Micropreneur’s Business Case for Airbnb - Shareable
Skip to content 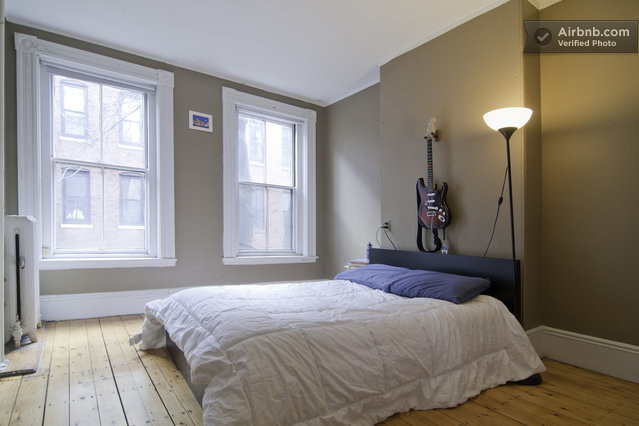 Micropreneur (n) – someone who takes on small projects in an attempt to solve problems, meet new people, develop new skills and ultimately produce something useful. (adapted from urbandictionary.com)

I live in downtown Boston and “invest” over $1000 per month in my apartment. However, due to my appetite for outdoor shenanigans, I’ve only spent five out of the past 16 weekends at my apartment. This does not include two full weeks of vacation spent in Maine. In sum, I’ve been on the road 41 days over the past four months. That means I’m only using my apartment roughly two-thirds of the time. 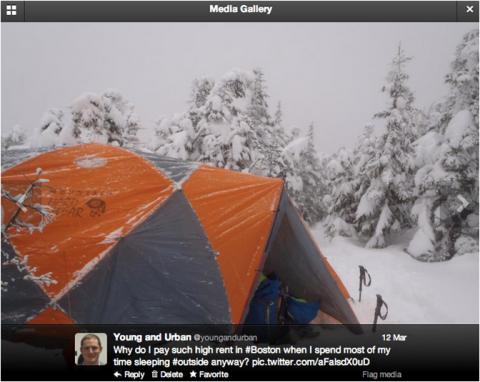 Here is a snapshot of the last four months:

Back of the Envelope Calculation

So it’s clear that I’ m losing money on my rental “investment” but the question is, how much? Let’s assume that I use my apartment every day. At $1000 per month, the daily cost is then approximately $33 per day. Using the past four months as my sample, I effectively wasted $1353 ($33*41days)! This is the equivalent of paying $50 per day (or $2600 per month) for the time that I’m actually using my apartment. Ultimately, I’m paying for 100% of an asset but only utilizing it 66% of the time. If this were a business, it’d be a foolish investment.

Thankfully, websites like Airbnb.com will allow me rent out my apartment when I head out of town. As any good micropreneur would do, I immediately opened a spreadsheet and did some market research to explore the viability of this idea.

Airbnb-like rentals have some obvious competitors such as free services like Couchsurfing and paid services like hotel chains. I’ve heard great things about Couchsurfing but won’t help my bottom line financially, so I focused my efforts on understanding both the hotel and Airbnb markets in Boston. In my research, I looked into over 40 hotel chains and 50 private rooms on Airbnb in the Boston area.

After removing some outliers, here is a snapshot of the hotel and Airbnb markets in Boston (if you want the standard deviations or N values send me an email): 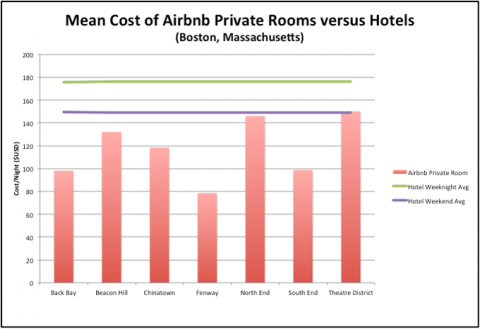 Boston sees over 22 million travelers each year who spend at least one night in paid accommodations. This means that the hotel segment is saturated with large players like the Sheraton, Marriott, Hilton, Holiday Inn, the Westin and others. As a result of this competition, hotel room costs are fairly even across the board. The average hotel room cost is $149 on weekends and $176 on weeknights.

Airbnb rentals on average are much cheaper than staying in a hotel chain, but the cost can vary widely by neighborhood. I live in Back Bay where the average Airbnb listing cost per night is approximately $100 whereas my North End neighbors are closer to $140 per night. Compared to hotels, using peer-to-peer accommodations are still cheaper and in my neighborhood it could save travelers $49-$76 or more per night. These savings combined with the sense of community that Airbnb tries to build makes peer-to-peer housing an attractive option to a lot of people.

Round A Investment – Replacing My Torn Comforter and Other Upgrades

Using a peer-to-peer rental model, I could potentially cut my rent in half in just five nights each month. If I put this extra income into paying off my student loans, I could double the rate of repayment and be out of debt in half the time. This is definitely a worthwhile investment to consider. Boston sees almost 60,000 travelers per day, so I think that getting five people per month to pay $100/night seems feasible.

As part of my seed investment, I replaced an old comforter because it was loaded with rips and I’ve had it since college. I’m fine with living in these conditions, but it’s not exactly something I’d be willing to pay for as a renter (oh wait…). I also made upgrades to my sheets and pillows. Then I had the entire apartment cleaned via Taskrabbit, which is a topic for a future blog post. 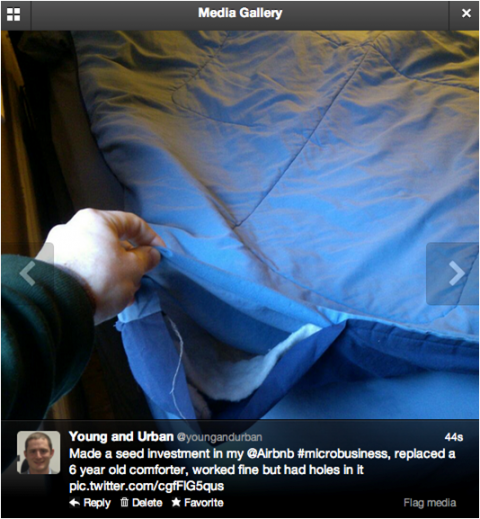 In sum, I dropped a few hundred dollars on my Round A Investment. I expect to break even after only two to three rentals. From there I would consider a Round B Investment to include a fresh coat of paint, an additional dresser, or a lighting upgrade. If I forgo additional apartment upgrades, then I’ll simply dump the money into my student loans. Either way, I’m excited to get started on this microventure, wish me luck!