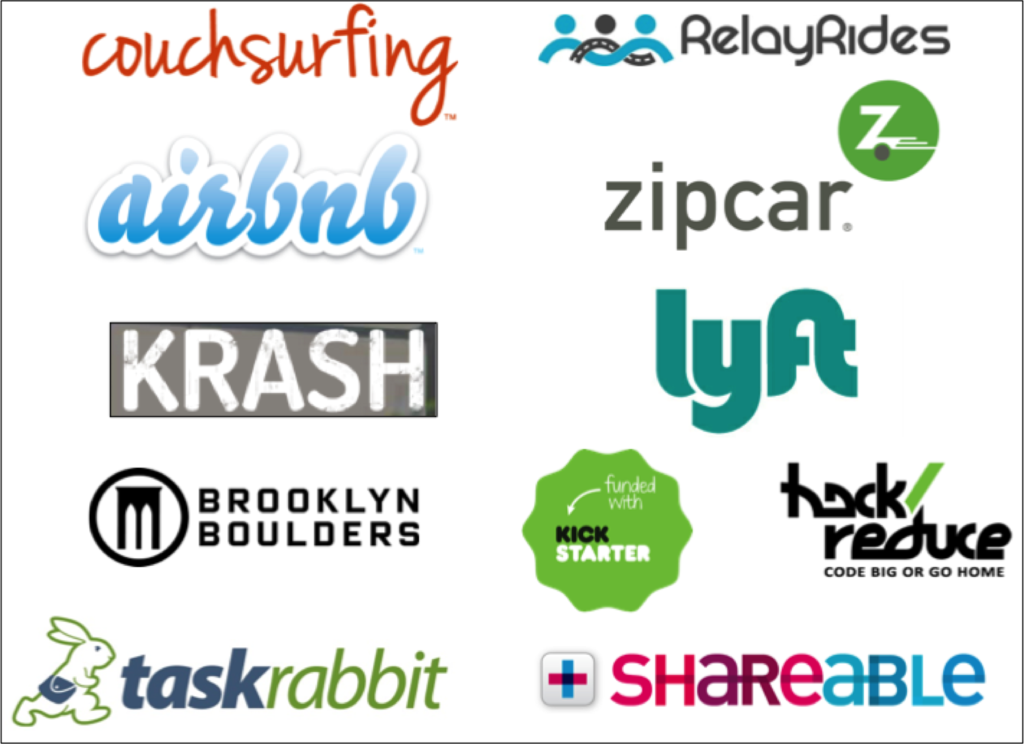 My name is Mike. I’m a young, urban professional in Boston who has spent the past year doing lifestyle experiments in the Sharing Economy. My first sharing experience was seven years ago in college with Zipcar. Since then I have shared everything from my house to my company’s data. With new sharing services being created for almost every facet of life, I decided to spend all of 2013 trying out as many as possible. I wanted to see for myself what services would fit my life. I tried coworking, coliving, ridesharing, carsharing, bikesharing, bartering, crowdfunding, hackathons, skillsharing, and more.

I was fortunate enough to meet Neal Gorenflo and to blog about my experiences with the Shareable community. The main takeaway from this past year for me was that the Sharing Economy is a more fun, cost-effective, and socially connected way to solve problems than its counterparts in the traditional economy. In my final post of the year, I’ll highlight a few of the key moments I was particularly stoked about.

One evening last spring, I was drinking beer with a Belgian couple in my kitchen. We had just met 15 minutes earlier and almost immediately started trading travel stories over Belgium chocolate and American craft beer. They were complete strangers that had found my Boston apartment on Airbnb, a global peer-to-peer housing network. For them, staying at my apartment was a lower-cost, more authentic travel experience than staying in a hotel. For me, I was able to make money while spending the weekend climbing in New Hampshire.

At first, Airbnb for me was fairly transactional. As someone in their mid-20’s with a mountain of college debt, I was looking for a way to pull in extra income. This certainly worked because I was able to cut my student loan repayment time in half, ultimately paying it off completely last July. Through a combination of using services like Zipcar, RelayRides, Airbnb and public transit, I was able to pay off $50,000 of student debt in just three years. I celebrated my newfound net-worth of zero by hiking a few mountain peaks, going on a trail run, and consuming multiple growlers of craft beer (shoutout to Airbnb and the Woodstock Inn Brewery!).

In addition to making extra money to pay down student debt, I knew I would have some unique experiences.  However, as an Airbnb host I wasn’t expecting that I would become the connection to Boston for dozens of people around the world. This became evident to me during the Boston marathon bombing when I heard from previous guests within minutes of the bombing. In fact, my previous Belgian guests checked in with me before my own family. It was very surreal to experience first-hand how the Sharing Economy can connect people in a very real and personal way.

On Monday April 15th, 2013, two bombs went off at the finish line of the Boston Marathon. I wrote a detailed blog post of my experience that day. I had two Airbnb guests with me, both from different countries. We were all within a few blocks of the explosions and thankfully we all made it back to my downtown apartment safely.

The bombs went off in the hotel district of Boston so many of the hotels had to shut down, displacing thousands of marathoners and their families. Airbnb offered urgent accommodations for people who were affected by the attacks. They offered rooms for free around the city to the people who needed them and Airbnb covered the bill, still choosing to pay the homeowners. I was impressed with Airbnb both as a socially responsible business and as a sharing platform. This was a real-life example of the power in connecting both people and distributed assets. They were able to respond with a housing solution for thousands of people in just a few hours. Amazing. My heart still goes out to everyone who was affected that day. Boston Strong.

The First Department of Defense Hackathon:

When I first started writing for Shareable, I visited Hack/Reduce, Boston’s newest hackerspace in Boston. I’m not a programmer or data-junky, but I was intrigued about the open-data movement, especially hackathons. Hackathons are events where people engage in collaborative computer programming in order to do something awesome with a particular data set.

At the time, I was doing engineering work for the Department of Defense (DoD), specifically in the area of Combat Feeding. We found that soldiers wanted to know more about their nutrition, but the data wasn’t available to them in a usable format. So I worked with the DoD to publically release the data set. The idea of sharing military data with a few hundred “hackers” seemed crazy, but eventually my military superiors saw the value in the peer innovation. So we ran the first ever Hackathon event for the DoD with over 100 programmers from the Boston area.

Teams created apps for nutrition visualization on Google Glass, optimized nutrition intake via android apps and nutrition games on the iPhone that soldiers could play during down times. Aside from the concrete outputs of this event, it showed me that if a large, bureaucratic organization like the US Department of Defense can innovate by sharing data, then anyone can.

In late 2012, I successfully ran a Kickstarter campaign for a product I co-designed called the Alpine Hammock. So 2013 saw the execution and completion of that project. We had ups and downs along the way but in the end we sent rewards to over 360 people from 22 states and 13 different countries. I wrote a few posts on crowdfunding throughout the year but if you want the nitty gritty let’s get a beer and I’d be more than happy to chat about it. It has been really cool to see support from around the world for our project. As an example, I woke up to an email a few weeks ago from a Kickstarter backer using the Alpine Hammock in Iceland (Maclellan Images):

Without crowdfunding we would still just be two guys in Boston with a great idea. After a year of hustling and help from hundreds strangers around the world, we’ve started selling the product online, we’ve filed a patent, and we’re marketing our product at tradeshows around the country.

Cohousing with Entrepreneurs at Krashpad:

Back in September, I moved out of my apartment downtown. I saw this as a great opportunity to dive deeper into the Sharing Economy through coliving. I found a company called Krashpad in Boston that is creating a network of shared living spaces for entrepreneurs. The concept is that by bringing entrepreneurs together, you have access to more resources than you would have alone.

I’m usually not a big fan of going to “entrepreneur” events in Boston. Usually, they’re filled with people pitching their businesses to each other and exchanging business cards without creating much value. I’d rather go climbing or drink a beer with friends instead. So for me, living at Krashpad transcended the business pitch because you were sharing meals with people and really getting to know them.

Since living in Krashpad I’ve found some excellent professional connections, but I’ve also made lasting friendships along the way. For example, I lived with another guy in the outdoor industry and we just planned a big ski trip to Aspen, Colorado. To me, real value is created through making solid relationships, not pitching your business to strangers. Combining peer-mentoring, friendship, and fun under one roof has enormous appeal to me and I got a lot of value from coliving at Krashpad.

Throughout 2013, if I needed a car I went to RelayRides, if I needed office space I went to a coworking space, or if I needed housing I went to Couchsurfing. It wasn’t until I was planning camping trip with a friend last summer that I realized there weren’t many services I could use for outdoor recreation. My friend was enthusiastic about the camping trip, but he doesn’t have a hiking backpack, tent, or sleeping bag. He was also unlikely to spend nearly $1,000 to acquire the items necessary for a weekend in the woods. Hailing from rural Maine, I’ve been an avid outdoorsman my entire life, so I found it interesting that more robust services didn’t exist. Ultimately, my friend didn’t come on the camping trip because access and cost kept him from participating.

After some research, I found that like my friend, the number two reason people say they don’t recreate outside is that they lack access to the right gear. However, the outdoor industry is a gigantic $646 Billion industry. So it’s clear that people are spending money on outdoor recreation, but that the assets aren’t well distributed throughout the community.

After chewing on this concept with my old friend from the Tufts University Mountain Club, we realized that a Sharing Economy platform could be a great solution to the access problem for outdoor recreation. So in August 2013, we launched GearCommons, a sharing platform for outdoor gear. If you own gear, you can upload it to GearCommons and make money by renting it out to people nearby. Alternatively, if you or a friend need outdoor gear for an upcoming trip, you can browse GearCommons to find a neighbor who already owns it.

My year of sharing was the main inspiration for starting GearCommons. I hope that by removing the barrier of access, we can help get more people stoked on recreating outside.

After a Year of Sharing:

I started using each sharing service because it fulfilled a real need that I had: transportation, housing, debt reduction, office space, data analysis. Over the past year I found myself choosing sharing services over the traditional options because not only did they solve my problem, but they did so in a fun, low-cost, and social way.

I want to thank Neal Gorenflo from Shareable for encouraging me to pursue this experiment and for the opportunity to blog about it. I also want to thank my friends and family who have supported my antics over the past year. I really appreciate everyone who shared these experiences with me. While this is the end of my year of blogging in the Sharing Economy, I’m not going off the radar. If you want to chat about anything sharing-related, feel free to reach out anytime via Twitter @YoungandUrban. If you end up in Boston, let’s grab a beer and talk about the Sharing Economy.