The 'Malaga Charter' is a Statement of Purpose for a New, Equitable Economy - Shareable
Skip to content 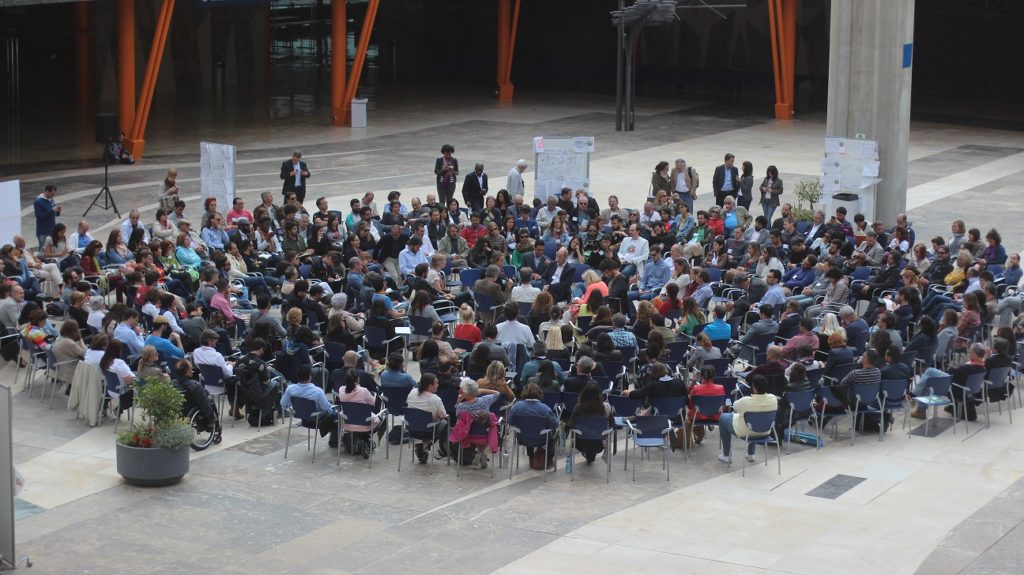 We participated in the New Economy and Social Innovation Global Forum in Málaga, Spain, last month. It was an inspiring and thought-provoking event that explored how we can design economic systems that serve everyone, and not just the wealthy. The three-day conference drew approximately 700 people from around the globe. In addition to keynotes and panel discussions, there were "open space" sessions where participants worked together to come up with action steps that could be taken to support the growth of the new economy.

But our work didn't start (or stop) there. In the months leading up to the conference, a joint statement of purpose, known as the "Malaga Charter," was developed by new economy movement leaders, based on the results of a study conducted by the University of Barcelona. Here's a brief write-up by the event organizers, with key points from the charter. You can read the full charter below.

"The goal and the purpose of the economy are to serve people and the planet and, in order to achieve this, we need a rights and values-led system where justice, solidarity, sustainability, equality, autonomy and collaboration are at its center." This is the key message of the New Economy and Social Innovation Charter (NESI Charter), which was presented last night at the first New Economy and Social Innovation Global Forum (NESI Forum), taking place in Málaga from 19th to 22nd April.

This statement, which has been co-written and signed by representatives from new economy movements worldwide, is based on an international research conducted by D-Lab, the University of Barcelona and NESI Forum during the second half of 2016 and up to February 2017. Data was collected through an online survey and several workshops about the goals and values ​​that should govern a new economy with the contribution of 600 people from 35 countries.

The NESI Charter states a new paradigm is emerging: "People around the world are living with a new consciousness and building a new economy." A new economy, it continues, "that works within the ecologic planetary boundaries and is based on shared capabilities, social and economic justice as well as human rights."

This new economic system, the NESI Charter explains, is one where money becomes a means not an end, banking and finance serve people, and money creation is under democratic control; where organizations serve the common good and operate in more collaborative and transparent ways; where the concepts of property and ownership are redefined to ensure a more efficient use of natural and human resources. The new economy, it assures, is one that provides access to education as well as meaningful and worthwhile work to all, promotes resilience and ensure food sovereignty. But it is also, and above all an economy, where people are educated to be the best version of themselves. Only by doing this, the collaborative statement adds, we will be able to eradicate the root problems of our society: wars, forced migration and resource competition.

As a result, the signatories of the NESI Charter commit to the co-creation of a new economy that integrates social purpose, ecological sustainability, collaboration, openness and justice and localization. These principles, they say, are already being put into practice by social enterprises, B Corps, banking on values, agroecology, the green, circular and blue economies, the commons, the collaborative economy and other movements such as transition towns: "This new values and right-based economy is neither a fairy tale nor a naive statement of purpose," the document says. "On the contrary, it is based on the evidence and practical experience delivered daily by millions of people and organizations worldwide."

"Today, we dream and commit to co-creating a better world," the NESI Charter concludes.

The NESI Charter by tom llewellyn on Scribd