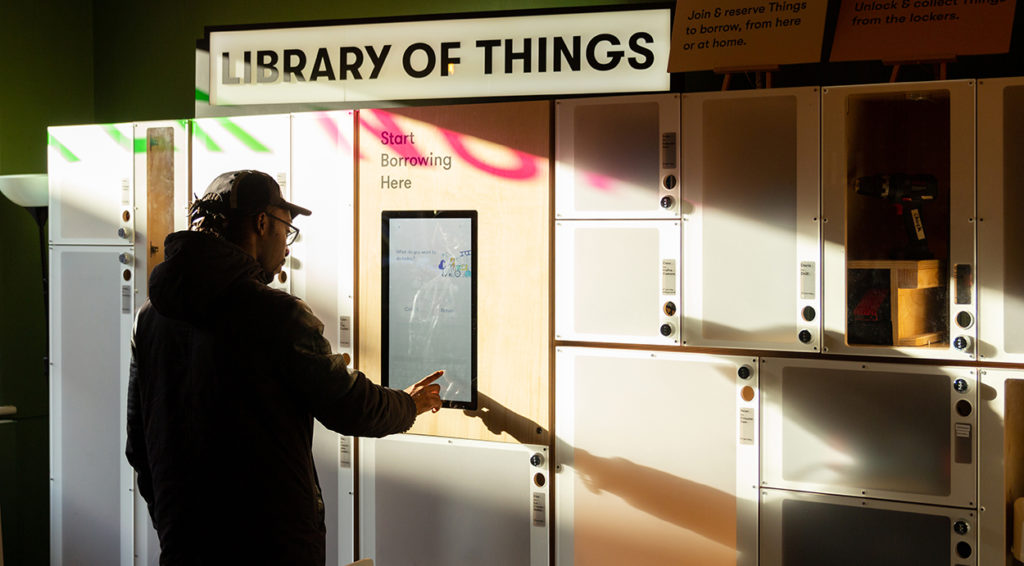 All around the world Libraries of Things (LoTs) are emerging and giving the residents of their communities the option to borrow instead of buy. They range from entire buildings full of tools or sports equipment, to local goods for rent in smaller venues like shipping containers, pods, and even tiny street-side stands. All together they are part of a growing movement which puts community and sharing at the center.

“It is absolutely a trend,” says Ken Haycock, a professor and coordinator of graduate programs in Library and Information Management at the University of Southern California. “What is happening is that libraries are seeing needs in their communities, and responding to them.”

LoTs themselves are not new — some, like Berkeley, California’s tool library, have been open for decades — and are now also run by nonprofits, social enterprises, and local communities directly.

“Libraries that offer tools or a wider range of products for lending seem to have a remarkable cultural function,” says Najine Ameli, a researcher at Bochum University of Applied Sciences in Germany, who is doing her thesis on LoTs. “They present a deviation from the standard, a viable alternative to the previous use-own standard.”

The future of LoTs is likely one where technology empowers more efficient sharing, communities play a direct role in management, and the impact is not merely economic, but social as well — a direct counter-model to unsustainable consumerism — and one that is not only more sustainable, but easier, too.

Technology can increase scale and impact

James Dong started Last Minute Gear in his San Francisco apartment back in 2015 with a simple focus — one particularly relevant to Northern California, where there is ready access to outdoor activities: Create a platform for the renting and sharing of outdoor gear.

“The mission is to reduce waste and increase access by developing scalable alternatives to buying,” says Dong. He saw technology as crucial to the success of Last Minute Gear. He knew that success for a start-up meant that it had to be financially sustainable, focusing on usability and convenience. Last Minute Gear was competing with the ease of the buy-and-keep or throw-away alternatives people were used to, like Amazon.

“Our economy has evolved in such a way that customers have come to expect to be able to eat almost every slice of the cake and have it for later, too,” says Dong. “People can ‘virtue signal’ about shopping small and local all they want, but it’s not enough people, not enough instances to reverse the trend.”

After some early success, Last Minute Gear moved to a showroom in 2016, and then to a regular retail shop in 2017. Physical presence was crucial, as Dong aimed to build a platform that allowed people to rent and borrow goods whenever they wanted, regardless of staffing.

“Last Minute Gear’s rental program is available 24/7,” said Dong. “You can be outside the shop when no one is working inside, place an order on your smartphone, then get a button on your phone to unlock the door, and access gear from a locker inside.” This allows him to be both more sustainable, cheaper, and faster than Amazon.

Tech has also been key to a London, England-based LoT start-up. When the very aptly named Library of Things opened their first sharing library in 2016, it was a retail location like Last Minute Gear. Now they’ve turned to a more tech-driven solution: self-serve kiosks in accessible community spaces, some of which are public libraries.

“The kiosk itself can look different in different places, and can be configured to any community space,” says Rebecca Trevalyan, one of the original co-founders of Library of Things. “It’s designed to be modular, so it can be larger or smaller to fit different places, and even be moved if the host space needs to use that particular spot for other activities. Additionally, they all have community boards, photos, and spaces for the community to adapt themselves.”

Like Last Minute Gear, Library of Things relies on technology to function, having built their own platform after realizing that existing platforms were not quite adaptable to the needs of local communities or users.

“Without the right tech it’s not a user-friendly experience, and so it’s difficult for borrowers to borrow,” says Trevalyan. “Having the right technology drives usage, and also means you can replicate the model.”

Historically, LoTs have performed a primarily economic function; allowing people to rent or borrow items saved them money. While that is still an important factor, the goals are far broader today: to promote local, sustainable development, with the understanding that mass consumerism is a key driver of environmental degradation.

Ameli believes that, in the future, LoTs can be a direct tool for communities to reduce their environmental and climate impact through the sharing of reusable goods, while also helping reduce waste.

“Possibly, municipalities could help provide suitable space or financing,” said Ameli. “Sharing libraries are [part of] the urban model for a sustainable or sharing city, since it enables the intelligent use of raw materials and energy, and furthermore improves the quality of life of inhabitants.”

Considering that, it is no surprise that the success of modern sharing libraries are directly connected to other factors that make sharing cities vibrant. London’s Library of Things has found that certain types of locations are more amenable to LoTs.

“Our model is particularly suited to densely populated urban areas,” says Trevalyan. “Seventy percent of borrowers come from within one mile of the kiosk. Hyperlocal neighborhoods are really instrumental to building community, because it is about creating connections between individuals.”

Dense, walkable neighborhoods are enablers to other forms of sharing as well, so it is no surprise that LoTs work better in this setting. The impact can be measured in ways beyond the direct benefit of any single transaction. Dong sees the potential to empower communities in an increasingly automated world.

“Beyond reducing waste and increasing access, not buying has some other really cool potential positive impacts as well,” said Dong. “Scandinavian studies have shown that rental programs help resist automation and provide apprentice-like skills development by creating a strong adjacent market for repairs.”

The past and future

Public libraries are certain to continue to be at the center of future LoTs, which — despite the shift to people accessing information digitally — remain central to vibrant communities and are more popular than ever.

“People are seeing that libraries are evolving as unique community spaces,” says Hancock. “They are safe, inclusive spaces that provide access to information and ideas that are neutral. The reality is that more people are going to libraries than ever before.”

Hancock sees some types of items as more “educational” than others and hopes public libraries can find a balance between lending non-traditional items while remaining focused on their missions to provide access to information and ideas. That means there will always be additional space for startups and community-driven platforms like Last Minute Gear and Library of Things to allow community members to share things that libraries cannot provide.

Both platforms are already looking to expand. Library of Things is opening up six more kiosks in London, and is talking with city officials in Briston, Brighton, Cambridge and Manchester about launching there. Meanwhile, Last Minute Gear recently had a tool rental pop-up in their store. Dong sees an opportunity to expand to other product verticals, but with the same goals. Longer term, he hopes the borrowing movement may even spur changes in how goods are produced.

“I always hope that demand for rentals incentivizes the design and manufacture of more sustainable products, rather than planned obsolescence, since you want rental gear to last,” says Dong.