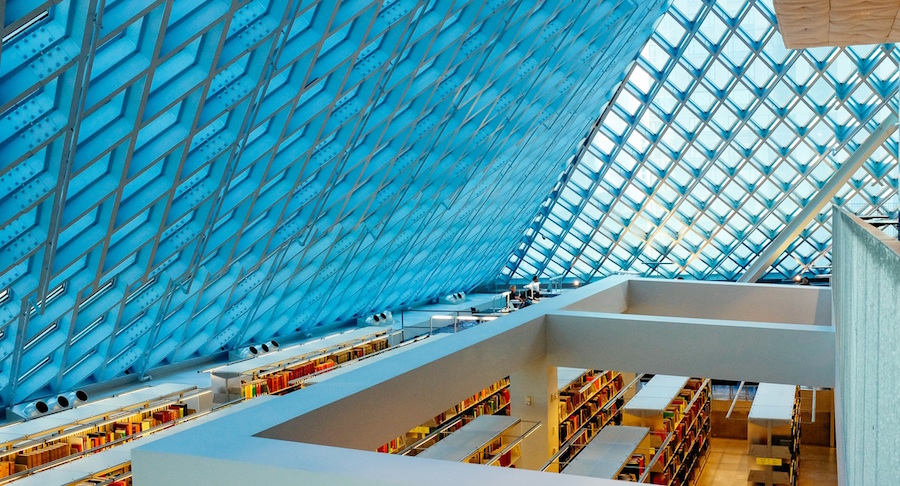 The Seattle Public Library is part of a new generation of American libraries. Photo by Pavan Trikutam (CC-0)

On the day after Christmas in 2009, Amazon.com released a statement that their Kindle e-reader had become the most gifted item in the company’s history. That holiday season marked an explosion of reading devices into the mainstream and posed a huge challenge for libraries. Now that people had readers, they wanted to borrow ebooks from their local library.

“It was a wild time,” says Keith Michael Fiels, executive director of the American Library Association (ALA). “Hundreds of thousands of people got Kindles and showed up at their library ready to borrow ebooks. But the big six publishers [now the big five] weren’t selling ebooks to libraries. There was a lot of anxiety about the potential of this model to disrupt—that a library would buy one copy of an ebook and then circulate it to everyone in the United States.”

“We’ve come to a much deeper understanding of how we help each other,” says Fiels. “There are thousands of independent publishers who, without library sales, would not be able to remain in existence. Whereas something like a Harry Potter or a 50 Shades of Grey may be able to sell a billion dollars worth of books in a year, most of the thousands of publishers and the titles that are published depend on public libraries.”

For libraries, supporting small publishers extends to the community level as they increasingly help individuals share their creative works. User-generated content (UGC) is a growing focus for libraries as tech platforms make self-publishing and alternative distribution easier than ever.

“A library has become more than a place that purchases commercial books from standard publishers,” says Fiels. “Increasingly, a library is a place where people can create content and share it with other community members. Whether it’s a place where people can put old family photos or things related to community history, or their great unpublished novel, this has become a huge area that a lot of libraries are looking at.”

Several years ago, Shareable reported on libraries’ changing role as community hubs offering gathering spaces, digital media labs, community resource centers, and art spaces. That trend has only grown, as makerspaces, incubators for small businesses, and programs to support entrepreneurs and the new workforce are now commonplace in libraries around the world.

Guided by a growing focus on user-centric design, where the people who use a space play a key role in designing the space, libraries are also experimenting with new ways to organize and display collections and reimagine the ALA’s mission to enhance learning and ensure access to information for all.

Increasingly, that means helping people to help themselves, whether through a multi-media center that provides access to video and audio recording software, a makerspace with 3D printers and digital design tools, portable wi-fi hotspots, or membership in a toy, tool, or seed library, the idea is to create spaces that provide access to information and resources of all kinds.

“There’s a lot of out of the box thinking about how community members and library users can help design spaces that are more accessible,” says Fiels, “and an understanding that this is something that’s going to evolve on an ongoing basis. What we’re starting to see is a whole generation of libraries that look very different and act very different from traditional libraries.”

A crucial aspect of empowering communities is bridging the digital divide. In the US, 15 percent of the population doesn’t have access to the Internet; another 25 percent doesn’t have access to a computer. Providing access to tech tools is a high-priority for librarians as accessing the Internet is now essential for job searches, employment applications, and applying for many government services. Inside libraries, librarians are there to help people navigate an ever-growing number of online resources, as well as find the most reliable sources of information.

“You’ll run into people say, ‘Oh, we don’t need libraries because we can just use Google on our handheld,’” says Fiels. “But there are a lot of assumptions underlying that. You need to have an understanding of what you’re navigating, you need to be able to tell an infomercial from real information.”

For a new generation of librarians, the job has evolved.

“One hundred years ago,” says Fiels, “you’d open the doors at 9 o’clock, you’d have books on the shelves, and people would come in. Today’s library doesn’t operate that way. You’re providing 24/7 service, librarians are out talking with community members and hoping to develop new approaches to serving the community.” He adds, “That’s really an exciting development and it makes for a very vibrant institution going forward.”

A next step for libraries is to create a national system where users can access materials from any library in the country. It’s an ambitious notion, but one that the the library leadership is working on. 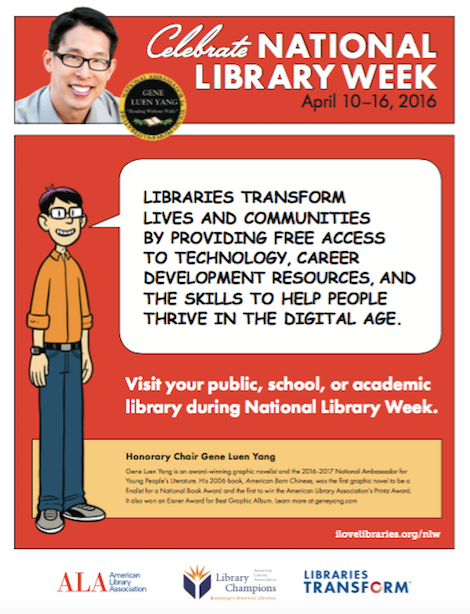 The theme of this year's National Library Week is "Libraries Transform."

In many communities, libraries are the great equalizers—places where everyone is welcome to gather, work, borrow materials, or just spend time. Whether it’s bridging the digital divide, providing a quiet work space, incubating entrepreneurial projects, or offering a way for people to check their email, libraries are designed to serve everyone and are essential in underserved communities.

“The key here is that libraries have always been even more useful for people that do not have advantages,” says Fiels. “You’ve got millions of young people that have potential, but don’t have the financial resources to be able to access reading materials or homework help. Lifelong learning through libraries is critical to the whole concept of opportunity in America.”

As libraries evolve to meet the changing needs of communities, they face many of the same challenges that have plagued them for decades. At the top of the list is funding. The fact that many libraries are funded with rounding errors from transportation projects and other big municipal projects, making them a small, budgetary afterthought, points to a need to recognize libraries’ importance and prioritize funding them. The 2015 Survey of Chief Officers of State Library Agencies found that 48% of libraries reported increases in the budget for the state library, which inspired a "cautiously positive outlook for the agencies." However, the increases were modest, with 43 percent of the reported gains in the 1-2% range.

Funding libraries should be a priority for municipalities as they play an increasingly important role in serving diverse populations and supporting creativity, collaboration, self-improvement, and community cohesiveness. As Fiels says, “I’d love to see a stronger recognition in terms of resources, and, certainly, it’s doable. I’m optimistic because I think there are great opportunities that exist for libraries and the spaces are going to become more and more interesting. We’re seeing a lot of libraries providing leadership in designing new kinds of spaces.”

Another challenge is shaking off the antiquated notion of what a library is. Part of what the ALA does is fight the perception of libraries being places that house dusty old books.

“Anyone who’s been in a good library, or a progressive library, knows that most libraries are fundamentally changing the way in which they relate to communities,” says Fiels. “There’s a lot more community engagement, a lot more openness to the library looking at the aspirations and challenges of the community and the role libraries can play.” He adds, “This really represents a whole repositioning of the library as a community institution.”

The theme of this year’s National Library Week, which runs April 10-16, is “Libraries Transform.” The theme illuminates the important role libraries play in transforming both communities and individuals through access to tech tools, career development resources, skills to thrive in the digital era, and an ethos of collaboration, equity, and community. It also reflects a bright future for libraries and the communities they serve, driven by the sharing spirit that is at the heart of the global library community.

“As far as the future of libraries, I’m very, very optimistic” says Fiels. “If there’s any group of institutions and individuals that have embraced networking and resource sharing more than libraries, I think it would be hard to imagine that.”