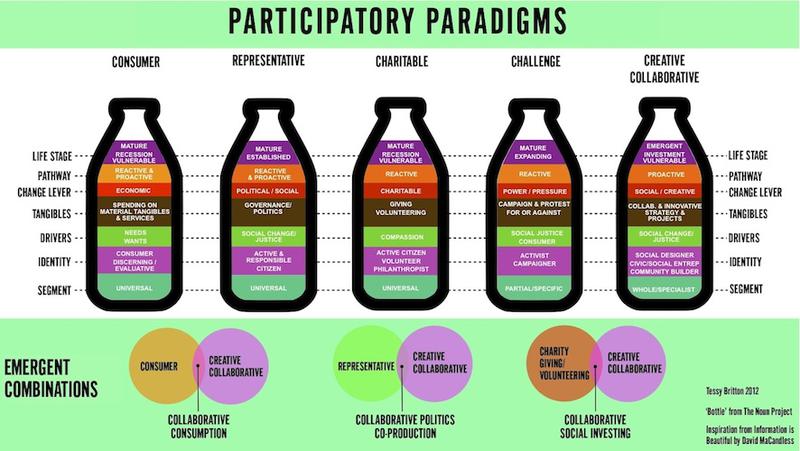 Is there a new creative and collaborative way that regular citizens are participating in society, and if so, how do we recognise, understand and promote these innovative and transformative ways of investing in society?

We have a number of well-established routes to participating in society. We participate through being consumers, supporting the economy, circulating money while trying to provide valuable livelihoods for ourselves and others. We participate through generosity, giving or sharing what we can spare and volunteering to help others, both at home and abroad.

Many of us choose to get involved in social governance. We may take on formal roles and responsibilities, become school governors, stand as a local councillor, act on committees and community forums. And, of course, we can vote. Less formally, we may also get involved in public consultations and – when we feel our concerns have not been sufficiently listened to – we can challenge decisions more directly through campaigning and protesting. So, with so many opportunities to participate, why are we seeing people engaging in their communities in new, more collaborative ways, and what can we learn from this?

An example of these new creative behaviours might broadly be described in this simple scenario: a person has an idea of how their street or community might look or feel different. They might think that a few benches in their street would create new opportunities for neighbours to get to know one another better through informal contact. Historically, they could take their idea to the local authority or their ward councillor, where it would be supported or not.

But if that person knocked on their neighbours’ doors, described their idea and managed to collect some donations and, together, they bought a bench or two – or even designed and made their own, then this would be a significantly different approach. They would not be acting out of charity, or representing anyone, or campaigning. They had a creative, socially informed idea and, working collaboratively with neighbours, they made it happen.

For some years, I have been working on a project called Social Spaces, concentrating on understanding these phenomena as they have emerged. Working with Laura Billings and Maurice Specht we now have 50 (and growing) collaborative books in production by brilliant voluntary editors. The Community Lover’s Guide to the Universe is collecting stories about these new types of local projects from around the world, projects often characterized by their powerful ability to gently bridge social divides and encourage co-operation and creativity.

Over the past 18 months, Social Spaces has worked in around 80 communities, asking over 2,000 people what they would like to see more of in the places where they live. We have worked in all types of communities, including less privileged places, and the answers are the same everywhere. Not a single person has asked for more restaurants, clothing or jewellery shops. Instead, people in the UK said they want to live in communities where the divisions between age, culture, wealth (and lack of it) are bridged. They told us that they want to live in beautiful places and, very importantly, that they want new types of common space, places that can help to build more sociable communities. They want to create a sense of community, to pool their ideas, talents and to build on their innate resourcefulness and resilience through simple activities.

They believe that these activities, added together, can start to make significant steps towards transforming their communities. Research confirms this. What has emerged from this work is an amazing collective vision: a homemade vision that is not being imposed by social theorists, the media or Hollywood.

Thinking about Creative/Collaborative as a new paradigm isn’t an utopian philosopher’s dream either – as we are seeing it is a narrative being told by grassroots community projects popping up around the world.  These are the people that are teaching us about how to create projects and ideas that connect communities in new and productive ways.  When analysed these projects aren’t ‘representative’, ‘charitable’, ‘consumer’ or ‘challenge’. So you could define Creative/Collaborative firstly by what it isn't i.e. we see activity that doesn't fit the other four mature paradigms, and secondly by the two strongest characteristics demonstrated i.e. Creative: they connect many new and existing resources and ideas to make entirely new things, and Collaboratively: they boost the potential and success of the work by collective and collaborative ways of operating.

This same pattern is emerging around the world, from community fruit collections and skills sessions, to resource sharing and many projects relating to food, growing, cooking, making and learning. What we are seeing is not nostalgic and is culturally and structurally very different from what we have witnessed before.

Knowledge about systems, the social connection needs of people, the ideas and methods of making these social projects work, is slowly becoming more widespread, making these innovative projects more sophisticated in their design. Some professionals are deploying their expertise in their own communities voluntarily. There is a much deeper and wider appreciation of the idea of waste; whether of people’s talents, ideas and energies, or physical resources. Collectively, these strands of thinking represent opportunities to act in clever and successful ways that have the potential to transform how we live day-to-day.

People are rediscovering the pleasures and benefits of common activity: neither as passive consumers, nor as needy recipients of charity, but as active makers and designers of the social, economic and physical infrastructure of where they live. There is a new sense of agency emerging, of optimism and of control, and it is revealing itself through positive activity on a human scale.

So what impact could this new type of creative and collaborative participation have and why is it so important? Three important questions:

If you have some thoughts on these questions I would love to hear them!

Tessy Britton is Director of Social Spaces – a project working to develop new knowledge about innovative community-led projects and has been collaborating with Zero Zero to develop The Civic Crowd, a civic project mapping and initiative development platform.

Tessy is Director of Social Spaces, a social designer, researcher and educationalist, who develops innovative methods for stimulating positive and collaborative approaches in wellbeing, citizen-led participation and community co-production.

Tessy is Director of Social Spaces, a social designer, researcher and educationalist, who develops innovative methods for stimulating positive and collaborative approaches in wellbeing, citizen-led participation and community co-production. Tessy is editor of Hand Made - Portraits of emergent new community culture (2010)which revealed and documented inspiring community-led projects from around the world. With the help of Laura Billings and Maurice Specht this initial book has grown into a large collaborative project which in 2012 will begin to publish The Community Lover's Guide To The Universe - a collaborative, crowd-sourced series of 50 (and growing) city and town guides where a high level of creative and collaborative community activity is emerging.