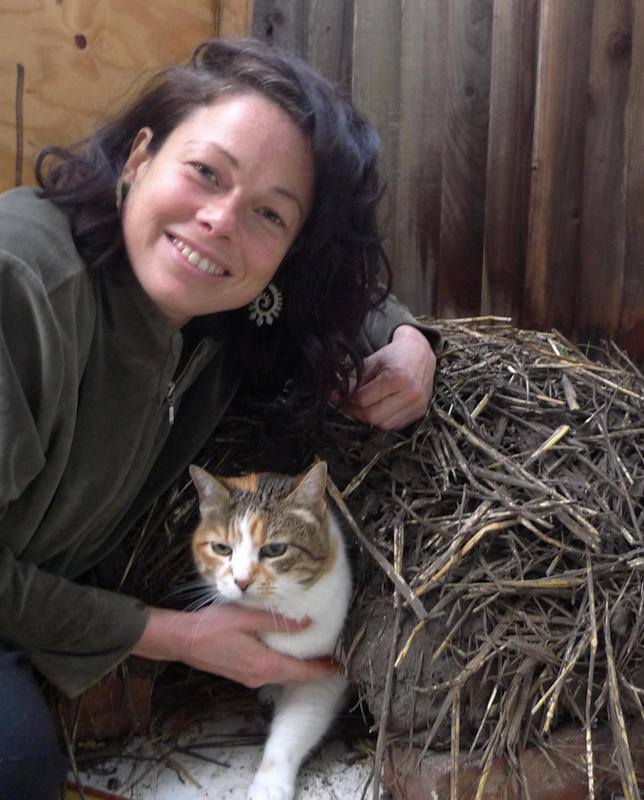 A few years ago I had to find a temporary home for my cat, Cleo. This is a story about how my cat finally came home, because my community built a home for her without money.

About four years ago I became ill around the time I lost my job as the economy tanked. Fortunately, my best friend took Cleo on her farm in Oregon and she's been living there happily ever since. Late last year my partner and I created a cat-friendly housing collective and moved in together. I wanted to bring Cleo home from the farm, but she needed to be outside of our new house during the day in order for everyone in the house to be happy.

It became clear that we had to build a dwelling for Cleo before she could come home. I wanted to find out if it was possible to build a sustainable cat house without money since I don't have much. Plus, I thought it would be a fun experiment in living in the sharing economy. I’d taken a couple basic workshops on cob ovens and the ovens looked like small animal dwellings so I decided I’d use a cob oven as a model.

In a stroke of luck, the day after I decided to build a cob cat house, an email about free straw bales was posted to a local urban agriculture listserv. Bob Besso of Recology (an urban reuse and recycling center) met up with me to pick up the straw bales he’d posted, helping me load them into my car. Bob later posted another email about a wood structure, which would be used to provide rain protection for the cob house. When I went to pick it up, Bob took one look at my tiny car and the big wood box and decided it would be safer if he delivered it to my house in his pick up truck. He took a half hour off work to help us out.[image_1_small]Then I posted my need for help to design the cob structure to our local timebank in San Francisco, still feeling uncertain in my mastery of cob. I got several responses. A fellow named Kerrick Lucker responded. He had taken a cob building class at Emerald Earth (one of the best places to learn cob in the country) and wanted to help me design the structure. We met to assess the site and draw out the design specifically for a cat and the local microclimate and laid out the shape of the foundation. I paid him three hours on the Timebank for his consultation. Kerrick also offered some left over clay and sand for free that was needed for the cob mixture, which I picked up from the house he'd just moved out of, saving him some effort to move it himself without a car.

[image_2_small_right]Aaron Castle also offered to help. I’d gotten to know him through the Unitarian Church group that I did presentation for about the Timebank. He works at Whole House Building Supply & Salvage, a building recycling company. He offered to provide some salvage materials to build the foundation of the cob structure and maybe a roof and window. We visited this cool store and found a redwood panel for the foundation and a glass brick for the window. Aaron said we could pay for everything in time dollars so I went on his store's computer and paid him one hour right there. Then he directed us to his home so we could pick up some bricks to use to raise the wood panel foundation off the ground and keep it dry.

Next I gathered my partner Marshall and my housemate Carly to put it all together. We had fun making lots of cob mud balls and forming them into a small dome. Cob is great to do with other people – its playful work and together we got it all done in one winter day. Alone it might have been quite laborious. It took a few weeks to dry, but just in time for Cleo's homecoming.

Even though her shelter was complete, I couldn't take off work to drive from Oregon and back to bring Cleo home. So I jumped on Craigslist to see if I could score a ride for her and save on some money and fossil fuel too. I got a few responses and one worked out well, with some cat-lovers that let Cleo snuggle on their laps for the long 10 hour ride home and kept her cosy and fed until I came to pick her up in Oakland.

It's amazing to me that all this could be done without money. I now believe we could do pretty much anything without money as long as we have community. It's not as long of a road as one might think. And practicing living in the sharing economy might just get us there a bit faster. If you have some project you’d like to do, but it seems impossible – try doing a community barn raising and get creative using reciprocity.