The Battle of Brooklyn Bridge - Shareable
Skip to content 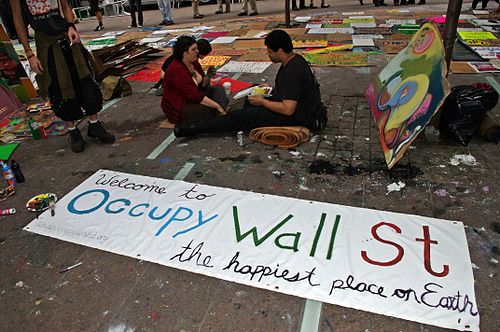 For one hour on Saturday, the bridge belonged to the people. 1000 protesters spilled over its roadway while another 1000 marched across the pedestrian walkway. In the roadbed, filling the Brooklyn bound lane with traffic, we screamed and jumped and took in the view. And not the view from the narrow, raised central walkway, where there isn’t nearly enough room for the tourists and bikers to coexist, where recently ten-foot high metal construction barriers have blocked the skyline. We were right up against the edge.

For the next four hours on Saturday, the bridge belonged to the NYPD. Setting a line of police vehicles and orange netting at the center of the bridge, and coming up behind us with patrol vans and paddy wagons, they kettled us. Some protesters, quick enough and closer to the center, scaled the bridge posts onto the safety of the walkway ten feet above, but cops soon pushed through the northeast side of the lane, separating us from escape. One by one, violently at first, then, as the reality of our position became clear, smoothly, they arrested us. The NYPD spent four hours arresting 700-plus people.

We were put in plastic cuffs and sat down behind the police barricades, where an "arresting officer" was assigned to every five protesters — from then on we would be transported and processed in groups of five, getting in and out of jail at the same time, a little sub-unit of solidarity. Some of us were put in police vans and buses, but most were transported, like I was, in requisitioned MTA buses. Ours was a B41, which normally runs right by my apartment, driven by an MTA bus driver—a coerced union transportation worker, not a cop—who said while we rolled out: “It feels like the 60's again!” to raucous applause. Arms aching restrained behind us, sitting on the hard plastic seats, cops standing over us looking bored, with our eyes at their waists, looking at their guns and pepper spray, this was the commute par excellence.

There is no single precinct jail with capacity for 700 prisoners, so protesters were spread in jails across Manhattan and Brooklyn. The buses functioned as holding cells while the police prepared intake- mobile arrest pens where we sat for hours needing to pee and stretch our arms and legs—but for most of us that was the worst of it. "Arresting officers" didn’t get to leave until "their" five arrestees were processed, so we sat in jail talking, chanting, singing, sleeping, or staring sullenly at our feet while they filled out paperwork until two, three, four in the morning. Those of us with ID and without warrants were given a Bench Summons for Disorderly Conduct and released the same night- those without ID were released throughout the day Sunday. Though a couple protesters with outstanding warrants stayed longer, many protesters with, shall we say, pressing legal issues got through unscathed. We overwhelmed them: the cops just didn’t have the capacity to properly sort us. Charges would’ve been disastrous, but there were too many, and as a result, barely any misdemeanor charges (let alone felonies).

But for all that happened, the stories parsing the meaning of Saturday’s events have focused around one ten-minute stretch: the moment at which people deviated from the pre-planned route across the pedestrian walk and took the roadway. Two stories are being told. Story one claims that the police instigated and tricked protesters onto the road, luring them with a combination of obviously weak policing and agent provocateurs in order to entrap and arrest them. The idea that cops led protesters onto the bridge has largely been supported by this video, which shows police walking ahead of protesters as they enter the onramp, and has been interpreted as cops leading the march.

Story two has the protesters stop their march at the base of the on-ramp to make a choice. The police warn them to get out of the road, but a group of protesters in the front decide to link arms and take the bridge anyway. The lieutenants, not expecting this radical action, back off, and protesters march onto the bridge with cops fleeing ahead of them. This argument has been supported by this video, in which a lieutenant, announcing protesters’ immanent arrest if they don’t clear the road, is ignored and drowned out by marchers’ cries.

In story one, the NYPD are brilliant tacticians, controlling and understanding the protesters perfectly. Despite this total knowledge, however, they are so filled with spite for the protesters that they are willing to shut down the Brooklyn Bridge for five hours in order to arrest them, resulting media coverage be damned. They're supposedly both super-villain brilliant and obsessively idiotic. In story two, the police are unprepared and overwhelmed. Expecting the protesters to cross legally, the majority of the police force was amassed on the Brooklyn side. When protesters took the bridge, the Brass panicked and locked down the bridge. They arrested everyone, believing it better than appearing unable to control the situation, revealing themselves as reactive, arrogant, and tactically mediocre.

In the first story, the protesters are foolish, misled and chaotic, unable to recognize that they’re being led by the police to certain arrest. Idealistic but stupid, fatally infiltrated by provocateurs, they bumble away from the planned peaceful march into disaster. Despite their total idiocy, this narrative maintains that these innocents are the very center of the police’s universe, the total focus of their actions. In story two, the protesters recognize their own strength, the power-and-attention-amplifying value of disrupting infrastructure and the potential fun of occupying the bridge. They overcome their fear of the police and their fear of the impossible, and seize their own freedom, even if just for an hour.

The protesters should clearly be telling story two, and not just because it’s what actually happened. But instead, they’ve mostly told the former. Why? The generous explanation is a knee-jerk dismissal of mainstream media and police narratives, which is certainly present, but there are worse motives for the propagation of the cop-control story. Politically repressive or vanguardist, power hungry or critically feeble: despite all disavowal, power has centralized around certain figures within Occupy Wall Street’s committees, and when power centralizes, its bureaucrats always try to hold onto it. So organizers blame the other side, albeit with a blatantly bizarre explanation (The cops really wanted to shut down the Brooklyn Bridge and arrest 700 people? Their whole job is to keep infrastructure functioning.) Organizers, upset over the loss of control of the march and behaving identically to police upset over loss of control of the bridge, blame the other side. Each side argues that their own weakness took the day.

Those of us running up the Brooklyn Bridge, those of us who for one glorious hour held it, occupied it with 1000 of our closest friends, we weren’t manipulated by police: we just decided we’d take a walk on the bridge. Everyone focuses on the arrests, on the drama, but most people fail to mention just how easy it is to take something over when there are 700 of you. 1000 people can walk anywhere they want, and, if they do it right, do anything they please. It’s when the cops are trying and failing to arrest 1000 of us that things are going to get really interesting.