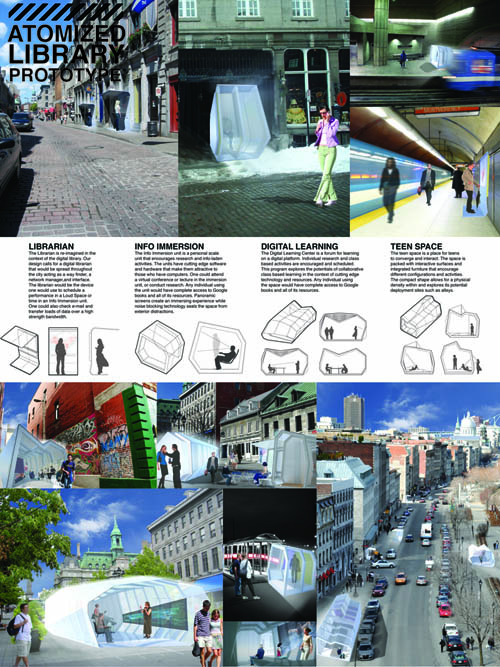 Importantly, though, the entire point of Young's investigation was to ask what libraries might look like if information was no longer accessed through books. "This methodology," Young and Walters write, "increases the density of the urban fabric, and allows for a new reading of how we use and access information." His units would be particularly well-suited, he suggests, for "unbuilt and under-used" urban sites.

Think of it as a network of partially prefab, rapidly deployable, plug-in, book-less micro-libraries, with potential for global distribution….

In fact, it raises an interesting question: when it comes to public libraries, whether we're referring to New York City or Ciudade del Este, what is the architectural equivalent ofOne Laptop Per Child? Is the future of the community library a modular shed, or has an entire building type been made obsolete by handheld devices?

I like this idea; it seems consistent with current trends — in fact, I'd say this is already happening in most cities, as nonprofit and community groups launch their own projects in a decentralized way — and it enhances urban sharing.

Can this be integrated with the idea of turning libraries into neighborhood share centers? Absolutely: As books are disembodied and information is digitally distributed, physical library spaces can be converted (not unlike 1990's military base conversion) to points of community convergence and local sites for product service systems, a fancy word for ways to rent or swap or share stuff. 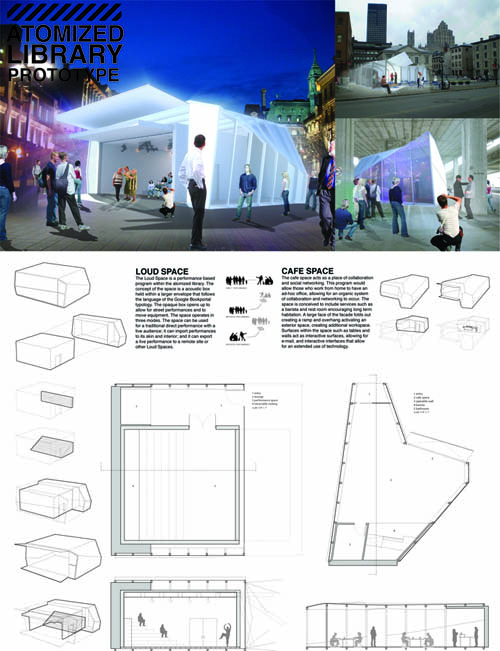 You can see larger versions of these boards at the Bldg Blog flickr page.