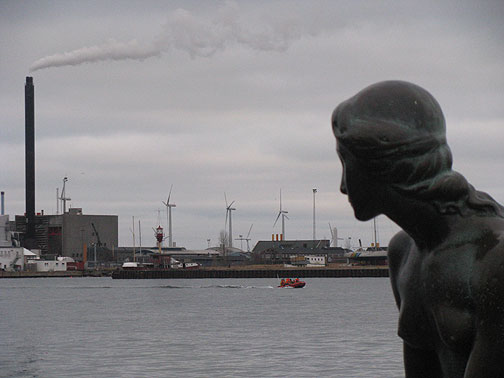 The Little Mermaid is Copenhagen’s best known icon, sitting in the water a half kilometer north of the storied tourist area Nyhavn. We spent our last full day in Copenhagen, Sunday, trying to take in some tourist sites, but the police were an overwhelming presence anyway.

Going to the northeast corner of the central city to Osterport we came upon another police cordon around a couple of hundred arrestees, marchers who had been heading down to the port to nonviolently “shut it down.” The police accompanied them for a while and then suddenly decided to close in and seized over 200 protesters before any laws had been broken. Over 1,500 were arrested over the weekend in a police strategy they seemed to have picked up from the Bush Administration, pre-emptive policing. The arrests continued Monday night at Christiania and again on Wednesday as protesters sought to enter the COP15 Conference and stage an alternative People’s Assembly, but the police met them with pepper spray, tear gas, batons and dogs.

After pausing to photograph the police action, we continued to the Little Mermaid where we found this other statue mysteriously planted a few meters further in the water. It is by a Danish artist Jens Galschiot, who put together an incredibly impressive range of installations around town during the COP15 called “Seven Meters." We had noticed red blinking lights well over our heads on trees and poles all over town and it wasn’t until I picked up his brochure that I realized it was part of his installation, a line of lights all over Copenhagen marking the 7 meter line that the oceans will rise to if all the ice in Greenland melts (Greenland belongs to Denmark). 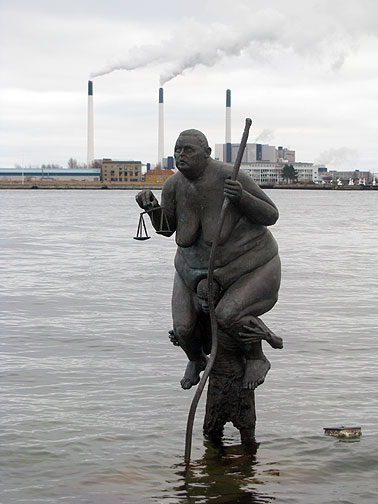 This Galschiot sculpture is called “Survival of the Fattest”: "With a pair of scales in her hand, a huge, fat Justitia figure is sitting on the back of a starved African man. Set up close to the innocent Danish national sculpture ‘The Little Mermaid,’ she’s confronting the real world’s deficient sense of justice with the western world’s hypocritical self-righteousness.” ..

“I’m sitting on the back of a man—he is sinking under the burden—I will do everything to help him—except to step down fro his back.” –Justitia, Western Goddess of Justice

At the end of the long protest march Saturday we came to the Bella Center where the COP15 process underway. There Galschiot has other installations including “Wandering Refugees”: Three 10-meter high sculptures with copper faces depicting African women with long dresses in strident colors. Standing on a savannah-like area they symbolize the refugees fleeing the droughts that have made their homeland uninhabitable. The sculptures indicate that the third world is hit especially hard by the climate change.

A half kilometer from the Bella Center on a distant hill is a tiny brightly lit Statue of Liberty:

“A 6-meter high kitschy replica of the Statue of Liberty emitting smoke from the torch. The document in her hand displays the ‘Freedom to Pollute.’ The sculpture symbolizes the conflict between our demands for unbridled consumption and concern for the climate and the planet that would imply that we reign in our excesses.”

The Little Mermaid inspired another effort to educate and counter COP15 lobbyists: a widely distributed ballot for the Angry Mermaid Award. You could vote for Shell Oil, Monsanto, the International Emissions Trading Association, the American Petroleum Institute, the Clean Coal Coalition, and a half dozen others, all well known corporate lobbyists seeking to torpedo the Climate Change negotiations during the past few years. Monsanto was declared the winner on Monday. 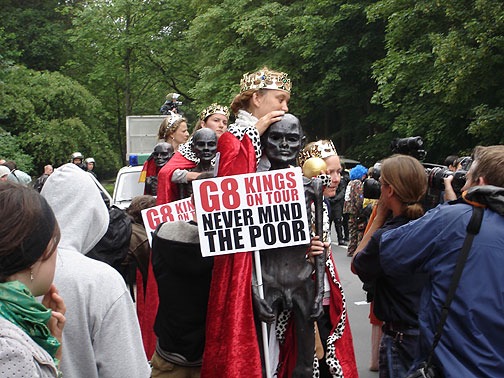 The art and creativity on display in Copenhagen continues a ten-year tradition at counter-globalization protests. Galschiot’s work here is based on similar art he displayed in Rostock, Germany in 2007 (above) where eight bronze emaciated "hunger marchers" were towed around by royal-robe-clad demonstrators under the title "G8 Kings On Tour–Never Mind the Poor." The Galschiot works, while stunning in their quality and humanity, are mostly rather somber reminders of the state of a large part of the world’s population. 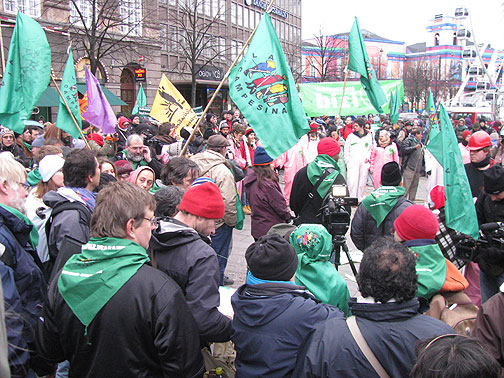 Other homemade signs and costumes run the gamut from elegant puppets to whimsical puns. One family on their balcony above the passing demonstration exhorted passersby to "Go Fruit, Go Beans, Go Nutz"! A samba bloc kept up a steady rhythm during the past week in Copenhagen, serenading marchers on Saturday and again on Sunday during the La Via Campesina protest, even carrying their energizing beats to the Bella Center after the sound trucks were shut down by the police. Drumming and dancing have been regular parts of all protests going back over a decade, embodying the participatory "Dancing in the Streets" that Barbara Ehrenreich wrote about, reclaiming public life and public celebration from the stiff, packaged entertainment commodities we are generally expected to settle for.

Though the big summit and conference protests often feel like exercises in impotence, amidst the confusion and police repression, something beautiful is also growing. Small blooms of nascent creativity refuse to succumb to hopelessness and despair. The facts are demonstrably bad, but the human spirit that can push things into altogether new directions continues to make itself felt too.