Starting with Culture Before Technology - Shareable
Skip to content 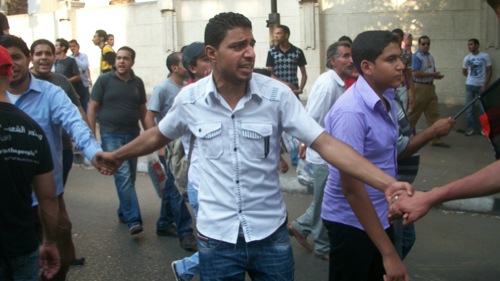 I have been enraptured by the stories gathered from my interviews in Egypt in June and July of 2011, and learning from these further convinces me how important it is to start with culture, community, context, and environment when discussing technology’s interaction with social, economic, and political movements. I’m currently working on a hybrid academic/public piece about networks — how Egyptians from a variety of walks of life narrate and imagine these, with the goal of identifying which networks actually drive activism and resistance.

I want to share some of the main insights I’m elaborating upon in my writing:

2. Technologies then may work to generate but one layer on top of an existing set of networks. But this layer may only directly influence a very few, particularly in a nation like Egypt where most (over 95 percent) do not engage with Facebook/Twitter/YouTube. Mobile phones penetrate much deeper, but it’s not clear whether these actually generate a new layer of networks for most. As in the West, most studies of mobile phone networks I’ve read in other parts of the world argue that mobiles work *with* existing geographies rather than dominantly transcend these. Of course with distance-bridging technologies, the possibility of developing international, globalized networks skyrockets, dating back to Manuel Castells’ brilliant three volume piece on the topic, but my sense in Egypt and other places I have worked in the global South is that international networks are more part of the lives of the wealthy, educated, and powerful rather than larger masses.

3. Social media needs to be clearly teased out. It’s a brilliant lump term but we all know that Twitter (personalized information streams, rapid sourcing of information, conversational in an @ # logic), Facebook (groups, ‘friends’, filter bubbled walls), YouTube (video sharing), and Mobile phones (associated with intelligent economic schemes, can be called even without credit, can keep with you on your body), are all *very* different in terms of how they prescribe impact and maintain affordances for the ‘social’. Moreover, *participation* with each of these differs. Using YouTube to watch videos is very different than trying to build influence networks via Twitter. Attending a virtual protest on Facebook is very different than using a mobile phone to figure out the location of snipers in a combative riot situation. UCLA’s PartLab, of which I am part (: ) ), is working on trying to distill out these different modes of participation and usefully unlock the lumpy categories of social and participation.

4. Class, education, and power all majorly shape one’s participation with social media. I mentioned that 95% of Egyptians do not use social media, and that there are 135K Twitter users in a country of 85 million. On top of this, even if one does have mere access to these technologies, to truly take advantage of these (and participate in this influence-wielding manner) one must also carry the infrastructural advantages (electricity, bandwidth, hardware, software updates, office/home space), media/information literacy (not just how to ‘use’ the technology but how to use it creatively, tactically), and networks in the *physical* world (meaning that just because one joins Twitter does not mean that they will be heard, however when Barack Obama or a well known media pundit joins Twitter, that’s a different story altogether). So if anything, social media amplifies already existing class-based inequities, and while it may bridge some of these, it also highlights these concurrently.

5. This is not to say the social media do not critically matter. Their influence on journalism is profound, especially in liberalized semi-authoritarian regimes like the former Egypt (note that every regime differs, and that the Mubarak Egypt is very different than a more highly controlled television/newspaper regime of the former Soviet Union, or even today’s Iran). Journalists I spoke with mentioned that they often source stories using trusted sources on Twitter, though as I discussed on National Public Radio (NPR), not unproblematically, with problems relating to echo chambers, different grievances held based on one’s place in life (social media users tend to by my interviews have less economically and materially specific grievances than poorer people who were very concerned with wages, food prices, ability to get married, employment, etc.), and sometimes lack of verification for exaggerated claims.

Moreover, I learned quite a bit about how social media groups can rapidly bypass emergency laws, where in-person meetings would be disallowed, monitored, and lead to arrests. In Egypt where infrastructure can be poor, and in Cairo where traffic is disastrous, social media activists told me how the Internet did serve as *their* public space of meeting. I also learned how social media can allow these activists to bypass international borders, with some like the well-known April 6th co-founder, explaining that he and his colleagues were in contact with activists worldwide thanks to social media, including in the neighboring Sudan!

6. So the question really is how did the masses emerge and take to the streets. Many colleagues are focusing on this as have I in some of the media appearances I’ve been doing. Without getting too into this, I will say that most explained to me that what occurred on Jan 28, 2011, related to the confluence of networks — keeping in mind as I mentioned earlier that social media was not a part of everyday life for most, particularly the younger, urban poor males who physically confronted and overwhelmed police. The power of mosques, street networks and community organizing/unions, classic institutions (including the Muslim Brotherhood and Salafists), and word of mouth (Egypt is a very oral, conversational society from what many told me) speak to these other networked layers.

This said, as one journalist mentioned, “even in the best of democracies, elites and the educated really matter — they are influence leaders and opinion shapers”. So of course while most social media activists may not be elites, their relatively higher placement in Egyptian society and smaller numbers still do matter in the types of networks and journalistic effects traced out above.

So finally, the above six points are but a very small start to a fascinating story I’ve been working on telling from a place of humility, acknowledging that in one month one is more reminded of what they do not know rather than what they do. But what this reaffirms to me is the power of culture, context, and environment — without these foregrounding in our global understanding, our stories about technology will remain inappropriately and falsely mythical, and ignore the far more interesting stories produced by people’s practices, values, and everyday lives.

This post is republished from Dr. Srinivasan's blog with permission.

Dr. Ramesh Srinivasan, Assistant Professor at UCLA in Design and Media/Information Studies, studies and participates in projects focused on how new media technologies impact political revolutions, economic development and poverty reduction, and the future of cultural heritage. He recently wrote a front page article on Internet Freedom for the Huffington Post, an Op/Ed in the Washington Post on Social Media and the London Riots, an upcoming piece in the Washington Post on Myths of Social Media, and was recently on NPR discussing his fieldwork in Egypt on networks, actors, and technologies in the political sphere. He was also recently in the New Yorker based on his response to Malcolm Gladwell’s writings critiquing the power of social media in impacting revolutionary movements. He has worked with bloggers who were involved in overthrowing the recent authoritarian Kyrgyz regime, non-literate tribal populations in India to study how literacy emerges through uses of technology, and traditional Native American communities to study how non-Western understandings of the world can introduce new ways of looking at the future of the internet. He holds an engineering degree from Stanford, a Masters degree from the MIT Media Lab, and a Doctorate from Harvard University. His full academic CV can be found here.