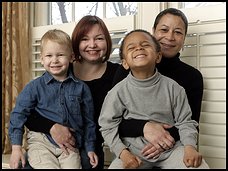 Shareable.net friend Will Watman pointed us to this terrific service: CoAbode, which "was founded on the principle that two single moms raising children together can achieve more than one struggling alone."

They provide "affordable housing opportunities, specialized support groups, educational scholarships, community outreach and involvement as well as referrals to vital resources designed to make parenting a child alone easier, healthier and more secure." This is such an amazing, straightforward idea, and I believe every word on their page of success stories:

Shawn and Darcie in Washington DC: "Because our sons are both only children, its been good for them to have brotherly attention and learn that they are not the center of the universe. And were here to support one another as much as we can." For example, recently when Allen had a late class, Goldstein picked up my son from school, fed and bathed him and put him to bed. And we trade off like that constantly, which makes life less stressful for both of us."

Carrie in South Florida: Living with another single mom has helped tremendously with finances. Sharing expenses whether its with food, shopping, or babysitting has been great. Chores are great; we switch off. Ill do "bath"; shell do dinner or clean-up. It makes it a lot easier to have two people pitching in to do the common everyday chores. It has definitely brought a friendship for my son. The boys enjoy it. They think that theyre brothers.

Alison and Sheila in Atlanta GA: "Well, I’m just going to make him my brother!" insisted 4-year-old Reagan after her mother explained that she and Dorian were not related. Dorian, 7, and his mom Sheila Hays (left) are housemates with Alison Sherrill and Reagan (right)." In October 2002, the four of them made it official. Now the makeshift family eats breakfast together every morning. A few nights a week after the kids are put to bed, Hays and Sherrill hang out in the den and chat or watch TV; as often, they go to their separate rooms and relax. Occasionally, one of them goes out with friends, leaving the other mom in charge of the sleeping kids. (Both kids spend weekends with their fathers, who are supportive of their ex-wives living arrangements.) Despite age and gender differences, Dorian and Reagan have bonded. "They are very sibling-like," says Sherrill. Alison cant remember exactly what her 4-year-old daughter Reagan was doing that day to provoke her leaving blobs of Play-Doh all over the living room rug? Pouring herself a glass of water and missing the glass completely? Whatever it was, it was pushing the Atlanta single moms buttons.

"I was done. I was finished. I was about to have a meltdown, " says Sherrill, 33. Fortunately, Sheila Hays, 41 a fellow single mom and a pro at spotting kid-induced exasperation was nearby, picked up on the cue and invited Reagan to help her in the garden." It was so nice," recalls Sherrill. "I was able to lie on the couch and read my book for 15 minutes. I was like, Oh, Lord, thank you. That’s the main thing you need most as a single parent. Sometimes, you just need a break." Sherrill and Hays are more than just good single-mom friends happy to give each other a break. They are housemates, and as such are among an increasing number of divorced, separated and never-married moms who are saving money, time and a big chunk of their sanity by moving in together.