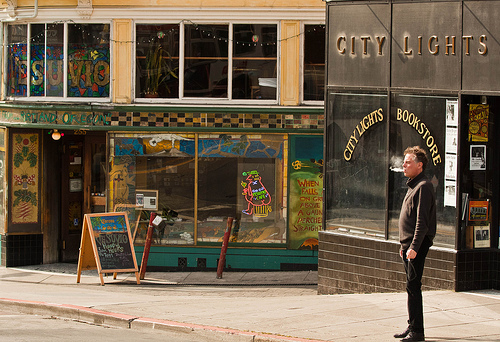 A few of the most beloved commons in our lives are not actually commons–at least not technically.  They are privately-run enterprises that nonetheless function as common gathering spots which loyal customers feel belong to them.

Think of your favorite coffee shop, bookstore, tavern, cafe, record store, music store, art supply story, barber shop or hair salon, antique store, vintage clothing boutique and other businesses you frequent as much for the chance to be part of the scene and run into interesting people as for the products and services you need.  Urban sociologist Ray Oldenburg calls these Third Places and makes a convincing case that they are woefully underappreciated as part of the social glue that holds our communities together.

The owners of these shops, at least those who stay in business very long, understand that dispensing caffeine, novels, pale ale or CDs is not their primary line of work. Their success depends on providing us with a congenial public place to hang out–and because of that we will spend our money.

The New York Times yesterday ran a loving tribute to one such place, the Raconteur used book shop on Main Street in Metuchen, New Jersey, which for seven years hosted music shows, art happenings, theatrical performances, poetry readings, even fire-eaters along with colorful surroundings and a sense of kinship in this suburban community. Sadly, the shop closes in January because owner Alex Dawson, who never made  much money at the Raconteur, is ready to try something new.

Some third place commons, especially book and record stores, now face intense economic pressures from Internet sales, new technology, big-box chain competitors and the continuing economic pinch that forces most of us to cut back spending even at places we love.

But even with the weak economy, many POPS (privately-owned public spaces) such as pubs, cafes and coffee shops continue to flourish, sustaining the life of Main Streets and urban commercial districts. And despite the odds, the number of independent bookstores remains stable as many branch out to provide espresso, malbec, stationary, gifts, music, dvds and an engaging atmosphere for loyal patrons.  Some record shops, particularly hard-hit by the rise of music downloading, now present live shows and have banded to together to celebrate Record Store Day the third Saturday in April.

With holiday shopping now upon us, 'tis the season to support your community by looking for gifts at your local commercial commons.

This also appears on the website On The Commmons