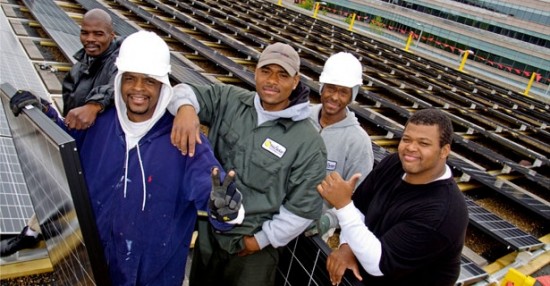 Most of us are used to work the way it has been since the first factories: one person, hired to perform specific tasks, with little say as to what's going on in the rest of the company.

A new documentary by Melissa Young and Mark Dworkin, Shift Change: Putting Democracy to Work, delves into an entirely different way of working – worker-owned cooperatives – finding companies that may not look different on the surface, but whose structure changes the way people work, and feel about their work, in a quietly radical, empowering way.

Worker-owned cooperatives are just that: companies owned and managed by the workers, who often "buy into" companies after a year on the job. The largest is the giant Mondragon Cooperative Corporation, 256 linked coops in Spain employing more than 83,000 people; Shift Change devotes extensive time to this 50-year success story, with interviews of post-war leadership and current cooperators about the culture that the coops have built – especially in the Basque region, where 60 percent of workers are employed by a coop. Coop factories, coop grocery stores, coop schools, coop social services…

The rest of the film focuses on American coops, which have diverse stories but are tied together by the altered workplace environment. In interview after interview, dozens of cooperators describe their experience of work as fundamentally different from "normal" jobs, that partial ownership makes their work more collaborative, decision-making more democratic, and gives them a voice.

The coops she visited had "a lot of mutual respect, a sense of fairness, a real valuing of people for what they had to offer," said producer Melissa Young. "A lot of these things are trained out of you. You just stay in your seat and that's the way it's got to be."

Featured in the film were the Evergreen Cooperatives, a redevelopment project born after the collapse of the local manufacturing economy in Cleveland, which now have green jobs staffed predominantly by African-Americans, including a solar installation company and urban greenhouse veggie farming.

A network of cooperatives in Madison include the high-tech engineering firm Isthmus, the Community Pharmacy, and Union Cab, which was bought by local cabbies after a strike shut down the company.

There's the chain of Arizmendi Bakeries in the S.F. Bay Area, which pool profits to fund more stores, and W.A.G.E.S., a S.F. Bay Area incubator for largely immigrant women to start coops of their own.

Coops look the same as other companies because they are comprised of the same things: capital, labor, and physical assets. Although capital is primary in traditional business thinking, in coops the people come first. And that has advantages, said the cooperators, especially when it comes to accessing the full potential of each person.

"We have been told that profit is the most effective motivator for innovation, but in reality, a sense of one's own efficacy is more motivating," said Melissa Hoover, Executive Director of the U.S. Federation of Worker Cooperatives, which is organizing coops nationally to connect with local government.

Shift Change delves into some of the limitations of coops, particularly the shift in thinking it requires. ("It's not for everyone," said one interview subject.) In order to compete with other global supply chains, Mondragon has purchased non-coop factories in Mexico and China – which it plans to convert them to coops.

In the Q&A session afterwards, the discussion also turned to startup capital for coops. The way that the Mondragon coops were able to grow to scale was starting their own cooperative bank in the 1960s. The Arizmendi bakeries in California were initially funded by One Pacific Coast Bank, a B Corp which works with coops. Evergreen Coops received public sector funding in the form of a HUD loan and redevelopment grants.

"Because of the fiscal crisis and political gridlock, so many of our fellow citizens have lost faith in the institutions that used to work in our benefit," said Ted Howard of the Democracy Collaborative. "At a time like this, new ideas really matter."