The nature of sharing in the modern world is changing. Traditional, evolved, interpersonal sharing within communities and families is declining as social capital erodes and community bonds fragment. Yet web-based sharing between relative strangers is booming, typically intermediated by commercial platforms.

In our new book, Sharing Cities, we argue that cities face both challenges and great opportunities to guide and direct this shift toward the public good. We explore how a genuine Sharing City might — amongst other things:

But to do all these things well demands public participation and that means — in one way or another — sharing one more city resource: power. Citizens need to have the capacity not only to decide whether and how much to participate in sharing ventures, but a role in determining their rules and shaping their design. Genuine Sharing Cities must share power and authority with their citizens.

There are plenty of cities experimenting with increased citizen participation in diverse ways. Participatory budgeting gives citizens an increased voice in how their taxes are spent, and is increasingly widespread — from Paris to Boston to Seoul, as well as in Latin America where cities like Porto Allegre have led the way. But even in its most developed forms, it’s still a limited step, rarely steering more than the tiny proportion of overall budgets and having little impact on broader questions of policy. 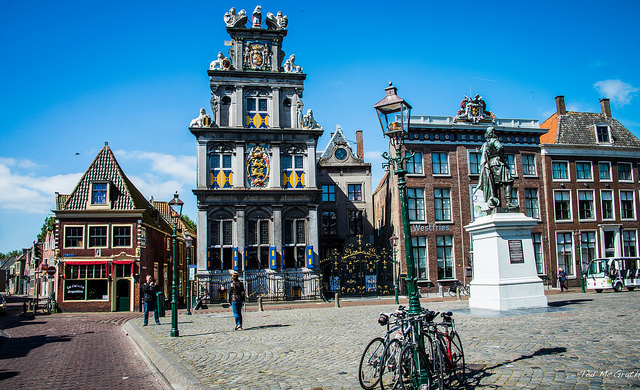 Citizen involvement in the delivery of public services such as health, social care, and education is also widespread. But in too many cities and countries this is largely a cynical exercise in buck-passing — shifting responsibilities to citizens, but without the resources or the authority needed to deliver them properly. Genuine co-production where citizens are involved not just in service delivery or the design of the system, but in both, remains rare, even amongst the best practice catalogued by NESTA in the UK.

People’s desire to be involved in design and planning, as well as in service delivery, applies across the real sharing economy — even where commercial intermediaries are involved. This is one reason why treating people as citizens, rather than consumers, is central to real sharing. It’s also why cooperative models for sharing platforms are preferable to corporate ones, and why cities should hold formal stakes in sharing operations.

Empowered civic engagement not only encourages greater involvement in sharing, it helps sharing rebuild social capital and — even more importantly — reinforces the ways that sharing can shift public norms, identity, and values away from consumerism. When it comes to the crunch, this potential for changing values is one of the fundamental reasons sharing is so exciting.

Somehow it wasn’t surprising to learn — at last month’s International Workshop on the Sharing Economy — that, in their review of emerging business models in the sharing economy, Boyd Cohen and Pablo Munoz found that most U.S. sharing economy businesses scored very poorly on collaborative governance. In cities, by contrast, shared citizenship underpins the basics of community. As Michael Sandel highlights, many of our shared public institutions are not just a safety net for the poor, but also "sites for the cultivation of a common citizenship, so that people from different walks of life encounter one another and so acquire enough of a shared … sense of a shared life that we can meaningfully think of one another as citizens in a common venture."

But, today, the intrusion of commercial interests and campaign finance into the civic realm and city politics threatens that basic sense of community and our mutual care for our fellow people. Sharing is a critical arena in which that intrusion can be resisted. By renewing and rebuilding social capital in community gardens, supper clubs, freecycling, street banks, and other such forms of civic, charitable, and communal sharing, communities can reject identities shaped purely by what we buy and own whilst at the same time countering the "democracy deficit" that many people are feeling.

And the more we think of ourselves as citizens, rather than consumers, the more feasible it is to resist and even reverse the dominance of commerce and money in politics. Enlightened Sharing Cities can help deliver this, involving citizens in co-producing governance through, for example, genuinely open consultations, open government initiatives, commons governance regulations, map-jams, and other ways of opening and utilizing the digital realm for citizen participation.

But, in other cities, such opportunities will have to be struggled over — and even where cities help, really shifting norms and identities away from consumption will need counter-cultural values to become mainstream. So Sharing Cities need places and spaces not just for invited participation, but also for invented or insurgent participation — and not just for civic engagement, but also for activism and counter-culture. This is why we suggest that squatting is more important to Sharing Cities than couchsurfing, for example: The rules and norms that the city establishes for squatting offer far greater scope to enable or constrain cultural change, than those around couchsurfing. 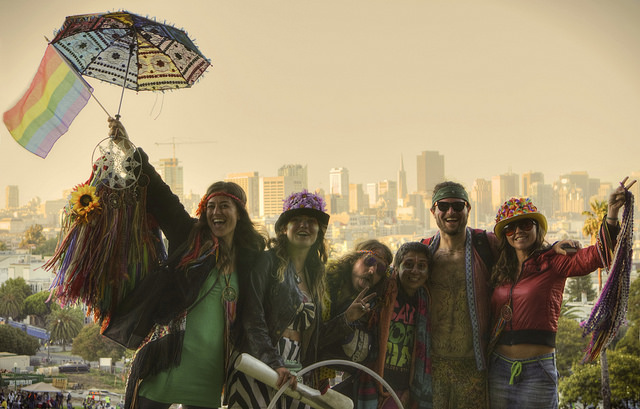 Of course, even couchsurfing, supported properly, can help enhance much needed cross-cultural contact, helping build empathy between the diverse populations of our intercultural cities. But cities need to make sure — above all — that public spaces also enable and, indeed, facilitate intercultural contact, and are inclusive, citizen-oriented venues for interaction and collaboration. We need our cities to once again become hubs for public politics and civic democracy, rather than be exclusively cathedrals of consumerism, dominated by marketing and advertising.

Throughout history, cities have been a crucible for democracy, a role too often disregarded in modern cities, obsessed with economic competition. Sharing Cities can rebuild the public square and return the citizen to the city (and the city to the citizen), enabling the public deliberation and public reasoning that are central to social justice. As we have seen, civic engagement and activist protest are equally valid and important forms of collective democratic politics, and both depend on a healthy public realm. And, in the modern age, that’s not just the physical public spaces and streets of the city, but online spaces, too. Sharing Cities can play a key role in making virtual spaces accessible, but will also need to protect them from excessive commercialization.

We already see more participatory forms of democracy emerging where citizens have sought to reclaim the shared public realm. To us, it is no accident that progressive populist political movements have arisen in diverse forms since the protests of Las Indignadas and Occupy. From Syriza in Greece and Podemos in Spain, to Britain’s Corbynistas and those "feeling the Bern" in the U.S. presidential primary race, these movements not only argue progressive policy positions, but also seek to change the ways in which politics is done — particularly rejecting the influence of money and commerce.

Sharing Cities need to seize the moment; they must grasp the potential of participatory politics and make real the Right to the City — not just as an entitlement to share in the life, facilities, and resources of the city; but also as a right to collectively change and reinvent the city, its citizens’ identities, and their politics.

The demise of feudalism at the end of the middle ages was accelerated as serfs sought their freedom in cities. The German saying stadtluft macht frei or "city air gives freedom" dates to this time. As sharing signals the possibilities of a post-capitalist society, city air can again offer the scent of freedom, as Sharing Cities offer citizens new freedom from commercial domination; new capabilities to live life in the ways we value; and new identities that don’t depend on material possessions, but on our relationships with those we share with. By democratizing the sharing economy and sharing their power with citizens, Sharing Cities can become platforms for democracy in practice, supporting a flourishing public realm, rebuilding social capital, and reweaving a web of mutuality.

Duncan McLaren is an independent researcher and consultant, Julian Agyeman a Professor of Urban and Environmental Policy and Planning at Tufts University.

Their book, Sharing Cities: A Case for Truly Smart and Sustainable Cities, is published by MIT press. Shareable readers can purchase it from at a 30 percent discount by citing this code: MSHARING30

Or else ask your local library to order a shareable copy!

Duncan McLaren is currently a freelance consultant and researcher, and part-time PhD student at Lancaster University. His research interests include cities, climate change, energy and geo-engineering, with a particular focus

Duncan McLaren is currently a freelance consultant and researcher, and part-time PhD student at Lancaster University. His research interests include cities, climate change, energy and geo-engineering, with a particular focus on issues of justice arising in these areas and the consequences for policy. Previously he worked for many years in environmental research and advocacy in the UK and internationally, most recently as Chief Executive of Friends of the Earth Scotland from 2003 until 2011, after which he moved to Sweden to spend more time with his children. His website can be found at https://sites.google.com/site/mclarenerc/home and he tweets at @mclaren_erc   Julian Agyeman is a Professor of Urban and Environmental Policy and Planning at Tufts University in Medford, Massachusetts, USA. He is the originator of the concept of ‘just sustainabilities,‘ the full integration of social justice and sustainability. He was co-founder in 1988, and chair until 1994, of the Black Environment Network (BEN), the first environmental justice-based organization of its kind in Britain. He was co-founder in 1996, and is now Editor-in-Chief of Local Environment: The International Journal of Justice and Sustainability. He is also Series Editor of Just Sustainabilities: Policy, Planning and Practice published by Zed Books and Co-Editor of the Series Routledge Equity, Justice and the Sustainable City. His website is at https://julianagyeman.com/ and he tweets at: @julianagyeman Their book Sharing Cities: a case for truly smart and sustainable cities is published by MIT Press (see https://mitpress.mit.edu/books/sharing-cities).