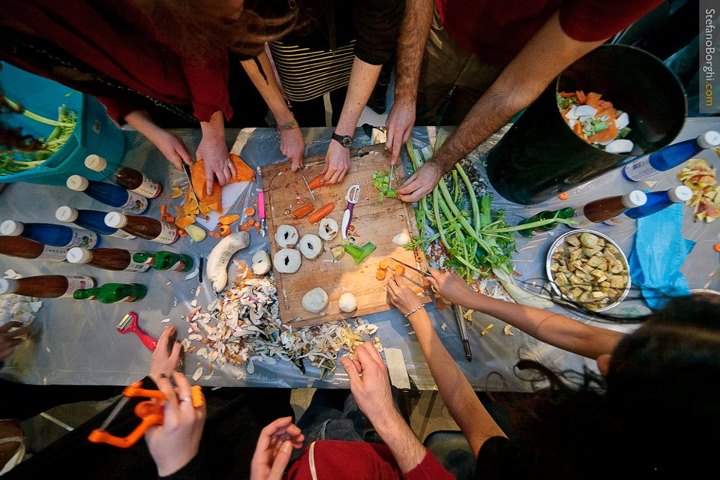 This story is cross posted with permission from our friends at Ouishare. It was a late entry to our Share or Die Storytelling Contest.

“Come and join us for a co-cooking afternoon,” the Facebook event said. One of my sweetest friends was the organizer of the Disco Soupe, an event bringing together random, like-minded people for a cooking-together experiment. A usual Velib ride took me and my friend to a new coworking space I had heard so much about.

As soon as I walked through the door, I instantly felt at home. The place was lovely. Vintage upcycled furnitures everywhere, colorful mix up of old and new chairs, shadows and lights from a David Lynch movie.

The Disco Soupe team was already busy arranging the freshly saved-from-the-bin veggies they had kidnapped from the Rungis’ market at 6 that morning.

"What do they mean by disco soupe?" my friend asked.

"Open your ears," I said, pointing at the Brazilian band on stage. He smiled like a boy of 6.

"I love this place," he whispered.

"Where are we?" asked a mum rinsing apples while rocking her co-created angel. 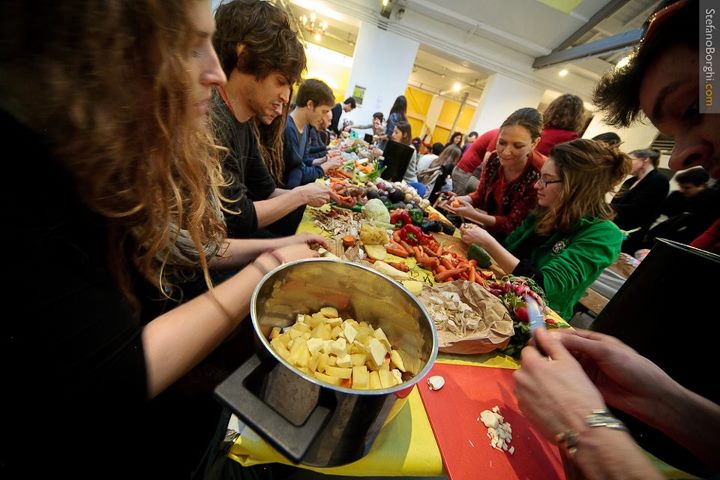 "Haha! I just asked the same question," answered a man behind her. "We’re apparently at Mutinerie (Riot), a so-called coworking space where people come to share desks, projects, and ideas".

"You mean we’re going to co-cut and co-cook in a coworking space? That’s co-ool!" she joked.

As soon as the music started, a sparkling energy wrapped the entire room and every single participant seized a peeler or a knife and started cutting in rhythm… carrots here, cabbage there, potatoes on the left, tomatoes on a chair, and random unknown veggies we didn’t even know how to cut… people started sharing food stories, secret recipes, smiles, lives, knives… I thought I would cook more often if I could have 60 friends at home every night to cut in music.

Two hours later, the soup was bubbling like a jacuzzi. The music had forced people to get closer and to raise voices, the Disco Soupe Team was dancing near the theater curtain and I had lost my friend immersed in a passionate conversation about whether couchsurfing was creating more soft-links than ridesharing.

Joining one of the guacamole table I stared at a guy just in front of me.

"Do I know you?" we asked at the same time after a long glance. Laugh.

He had the first guess, "Social Business Startup Weekend, I was a mentor."

"Right! Haha! Amazing that I meet you here. That’s pretty random," I added. And we started remembering the other social businesses co-created during this day. A couple of minutes later, I realized I had been pretty impolite to my co-bench neighbour. 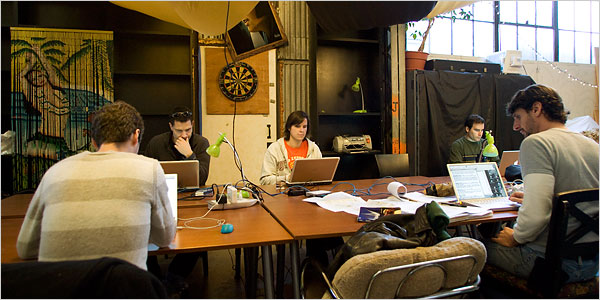 "Hi. Sorry, I’ve spoken too much already, and we didn’t even meet I think. Are you also working in social business?"

"Well, not exactly," he said gently, "I’m passionate about the collaborative economy. I started a blog on this topic."

"Aaaah, that’s you? The one I had on the phone two months ago?" He smiled.

"Well, I guess I am." This time, it was really amazing. And I don’t say that only for the American-like-writing-style.

We started talking about the sharing economy, the disruptive shift it will have in the next decades breaking the frontiers between consumers, retailers, producers, and the new social paradigm it will create.

Even though the conversation was exciting, I hadn’t forgotten the almost-gone guacamole and took a piece of his bread while listening to every single word.

"What’s mine is yours," he smiled. I blushed, embarrassed not to have asked.

"It’s a book… a very interesting book. You should check on ouishare.net. There are some lines about it." Smart twirl, I thought. And that’s indeed where the story starts…