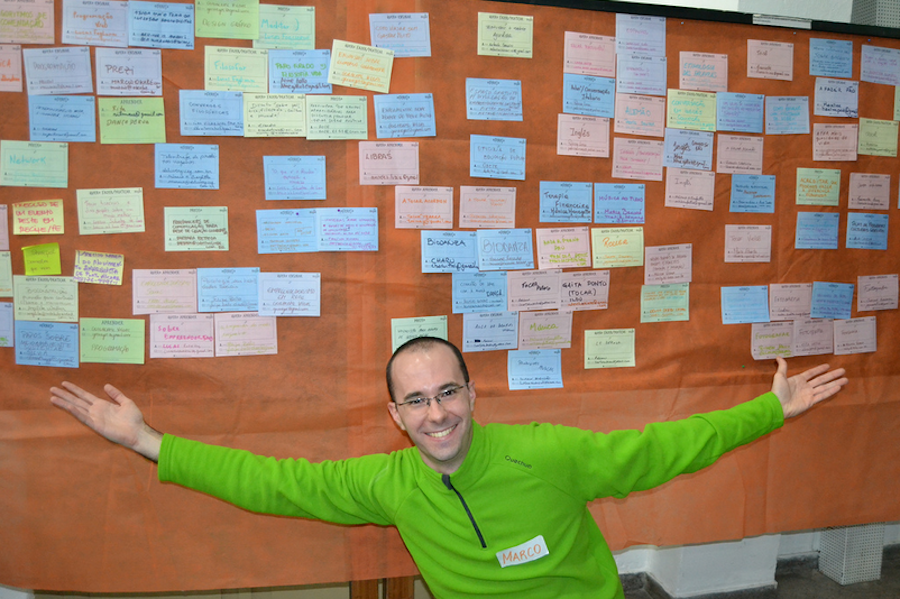 Attracting 450 people for a day of workshops, discussion, brainstorming, information-sharing, panels, art, music and dancing, ShareFest Porto Alegre was a great success. In true sharing style, the event was a group project from its inception, with organizers deciding that it should be as collaborative as possible, from the planning stages up.

Anyone with an interest in the sharing economy was invited to participate in the creation of the ShareFest. The focus of the event, which was sponsored in part by Shareable, was to promote the local collaborative economy and bring attention to local sharing projects and initiatives. 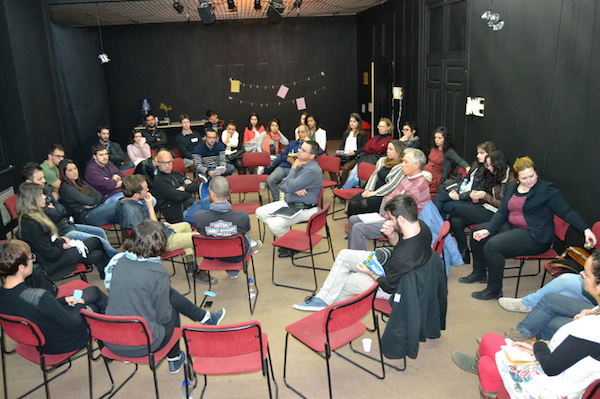 There were discussions, panels and workshops throughout the fest

For three months prior to the event, planning sessions were held at a series of open, weekly meetings at local venues. The idea for each meeting was to engage people from different backgrounds and interests so the meetings were held in many different locations including Esporo, a coworking space that fosters local projects; Nós Coworking, a coworking space focused on innovation and entrepreneurship projects; Fábrica de Ideias, a coworking/hackerspace; Meme Santo de Casa which fosters local artistic development, the Duplan House, the first and only LivingLab of Porto Alegre; and the Casa de Cultura Mário Quintana, a cultural center named after one of Porto Alegre’s best known poets. 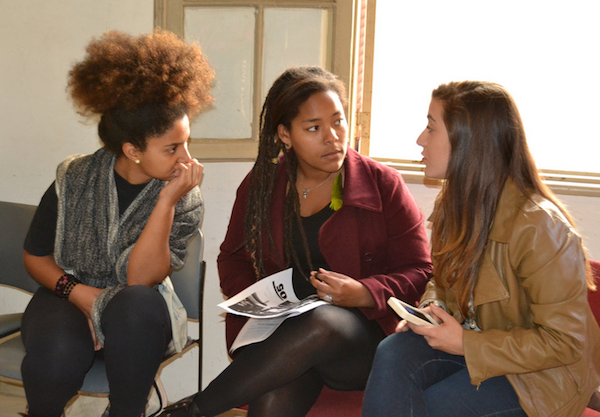 Alessandra Guglieri, one of the organizers of the fest, says that during the three months of planning and organization, the ShareFest team had the opportunity to collaborate in numerous ways and they were warmly received in all of the venues they met in. In the end, more than 80 people and 47 institutions or projects contributed to the creation of ShareFest Porto Alegre. They also gathered 1,300 followers to their Facebook page. In conjunction with the meetings, organizers mapped projects and initiatives related to sharing and collaborative processes. 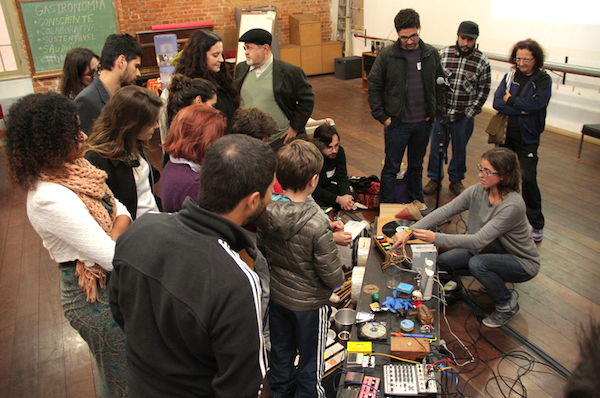 Makers learning how to build (and play)

The result of all the planning and collaboration was a ShareFest that featured 50 hours of content, and space for more than 500 people doing 25 different activities. “We ended up,” says Guglieri, “creating a real festival!”

“During the public meetings we met a lot of people with knowledge and skills to share,” she says. “We realized that we had enough offers to cover a full day. The coolest thing is that during the day we had six different rooms with parallel workshops, presentations and lectures going on; everything as collaboration.” 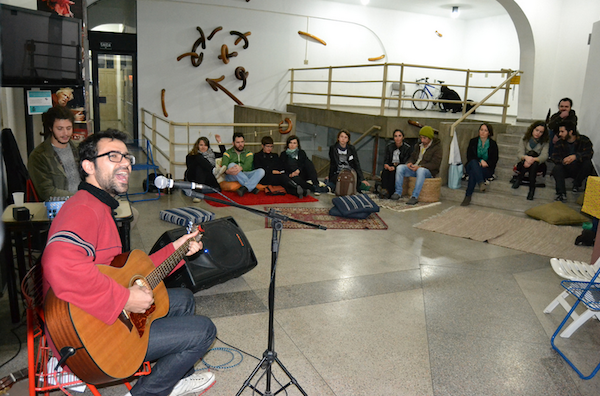 Music adds a nice touch to any ShareFest

Free to anyone interested in the collaborative economy, the ShareFest offered a way for people to make spontaneous financial contribution for supplies and activities through an online platform called noslab, which was offered to the group through collaboration as well. Attendees were asked to bring one item of clothing or one kilogram of food to donate to Amovisa, a local organization that supports at-risk young people. 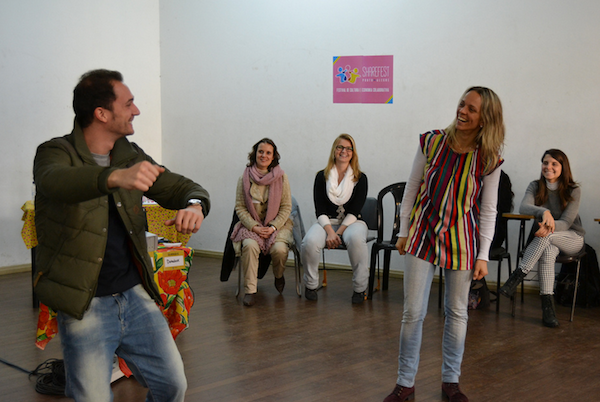 And where there's music, you can usually find dancing

The following were some of the themes of the ShareFest: 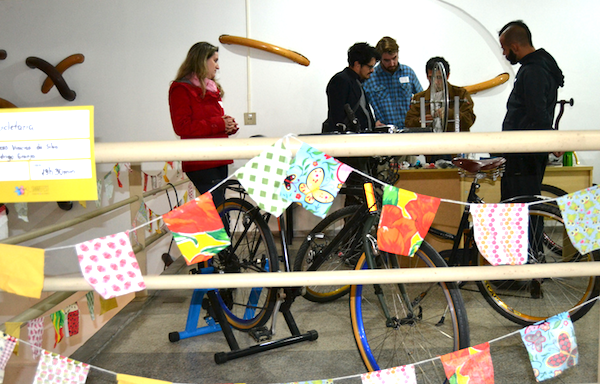 When all was said and done, ShareFest Porto Alegre catalyzed the creation of “an amazing network” that worked together to create the event. In addition to creative and logistical collaboration, organizers were able to secure furniture, LCD televisions, computers, a 3D printer, food, knowledge, graphic design, printed materials and photographers.

They collected 153 pieces of clothing, six backpacks, five purses, “a lot” of toilet paper (“We wrongly forecasted and bought a lot more than we needed,” says Guglieri), 15 kilograms of beans, 22 kilograms of rice, nine kilograms of sugar, two kilograms of flour, one kilogram of coffee and two kilograms of pasta. Guglieri notes that they've reached a perfect balance of financial co-responsibility for the event, spending R$770 total and raised R$945, leaving them with R$175 for the next event. 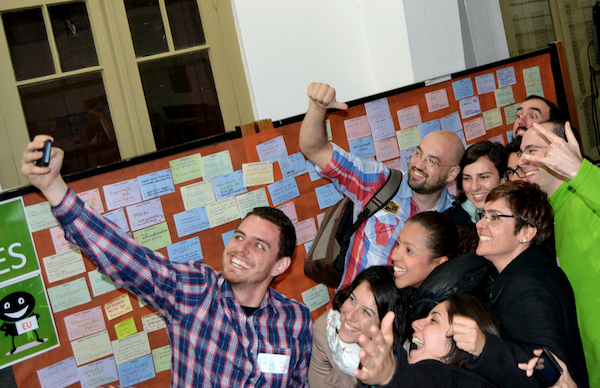 Time for a ShareFest selfie

While organizers acknowledge that there remains a lot of work toward making the world a better place, they agree that the ShareFest, and sharing in general, is a good approach to take.

“If there is a formula or a path, for sure it passes by sharing,” says Guglieri. “Sharing knowledge, sharing responsibilities, sharing resources, sharing laughs, sharing life.” She continues, “As we said a lot here, a better world just depends on the people.”