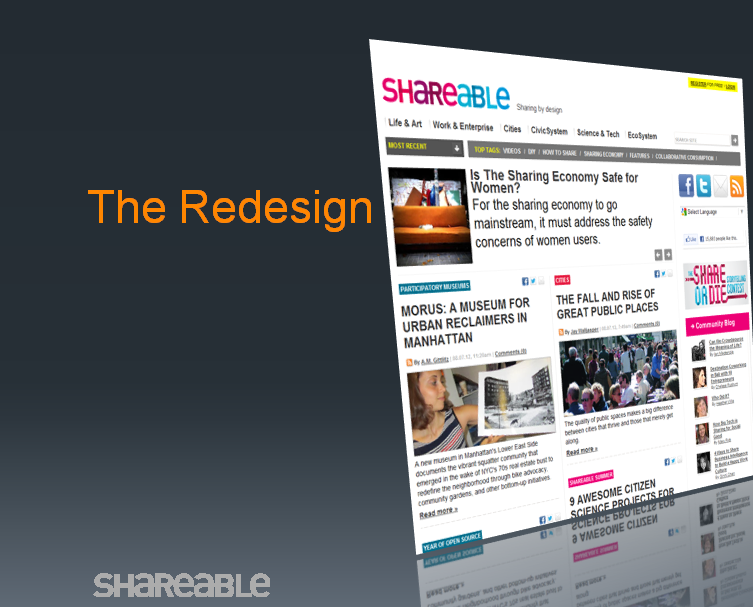 In early August, members of Shareable’s community—readers, writers, commenters, and sharers around the world—joined two online meetings to give us fantastic feedback about how Shareable can better serve the sharing movement. This event followed on the heels of our in-person San Francisco meeting on July 27, at which we received great input from our community.

Thank You to Our Community

During both meetings, participants were most interested in talking about how Shareable can help readers and users (you!) to better engage with each other online and face to face (similar to what we heard at the San Francisco event). Event listings and providing local information (a map or geographic listings) were both popular. There was also support for the monthly challenges to try sharing. During both online meetings, a predominant suggestion for improving the website was to make it more welcoming to new people. Finally, there were suggestions for article topics and an idea for a legal and policy resource related to sharing.

All of this feedback is explained in detail in the sections below.

We're planning to do a survey to see which of these ideas have the strongest support from our community. All of this great input from our users will be combined with feedback from other stakeholders, including our board and funders. Given funding constraints, we know that we won't be able to implement all of these ideas, at least not in the near term. So we'll work on prioritzing these ideas to see which most fit our mission and best serve our users and the sharing movement. We'll keep you posted as we know more.

In the meantime, feel free to add any additional thoughts or feedback in the comments below.

Engaging Online and Face to Face

participant feedback starts at 09:00 on the video – or see the full transcript

participant feedback starts at 08:30 on the video – or see the full transcript