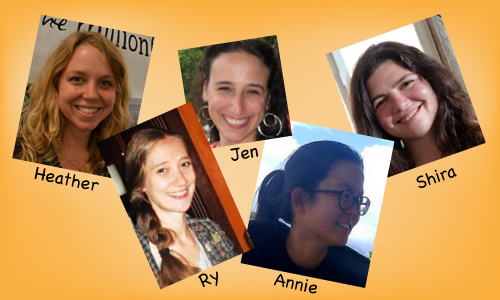 Sharing begets sharing. It’s something that Shira Golding Evergreen said in her video submission to Shareable’s recent Share or Die Storytelling contest and it’s a notion that resonated throughout the contest.

Asked to share their own stories of sharing, forty one contestants submitted written or video entries. Over 1100 people from the Shareable community, as well as a panel of judges, voted for their favorites and winners were announced.

The prize money–first place was $1000, second place was $500 and third was $100–came with a choice. Winners could take the whole amount as a credit toward a sharing service (Airbnb, Neighborgoods, a coop, Loosecubes etc.), they could donate the amount to a non-profit of their choice, or they could choose to keep 50% of the prize in cash for themselves. In keeping with the sharing begets sharing theme, the winners have all come up with ways to extend the prize money into their communities and keep the sharing going.

Annie Koh, who shared a story of creating local connectedness by sharing fruits and veggies with her neighbors, is donating her winnings, dividing the $1000 prize three ways between Kanu Hawaii, the non-profit she volunteers for, Indiegogo, and fellow contestant Ry Soutar, whose essay detailing how sharing is a vital part of her life as a single mother received an honorable mention in the contest.

When the winners were announced, Koh found herself wishing that Soutar had won too. She was particularly moved by two phrases in Soutar’s story: "the little, old-fashioned ways we all know how to share and rarely think about" and "I used to be so resistant to asking for or accepting help and in retrospect it was because I feared I had nothing to give."

Soutar’s story is, for Koh, “a powerful illustration of all those little actions, of the social contract between residents and government, the ties of mutual support among friends and family and neighbors.”

Of Koh’s decision to divide her winnings, Soutar says, “I thought it was just beautiful that she was spreading this bounty that came to her in multiple directions. She sent these portions of her prize off like little ships to see what more good they could generate. If we all did that we'd have much less of a resource crisis than we currently do.”

Heather Box's story illustrates that sharing doesn’t have to come in the form of a shiny, new, digital package; it can be found in the simplest of gestures. While visiting Vietnam, she found that almost all Vietnamese people know how to say “I love you” in English. Co-founder of the Million Person Project, a “global project about love, storytelling and connecting change makers,” Box says that she is “constantly babbling on about our oneness,” and that she must say the word “love” a hundred times a day. But when confronted with strangers in a new country stopping on the street to tell her they loved her, she was a little thrown — until she started “fighting through the awkwardness to stand by what I know is deeply true.”

She donated her prize to her friend Kaganga John, another contestant in the Share or Die Storytelling Contest, who, through his Global Giving Challenge campaign, is working to bring an Internet Center to his small village in Uganda. Box met John when she was in Uganda with the Million Person Project. While there, she saw that people had to travel up to four hours just to check their email. She realized that without outside help, John’s dream of building an Internet center would not be realized. She has been helping John with money, connections and fundraising tips and was happy to donate her prize money to the project.

Of sharing itself Box says, “I really believe that sharing is the only way we will find peace on this planet — sharing our knowledge, our love, our money, our ideas. When each one of us commits to sharing ourselves and what we've got, the world will be a healthy, happier, safer place…Every time I have found the courage to share, it's always been worth it."

Jen Abrams reminds us that an important part of sharing is trusting that you will receive what you need. Her story details how her local theatre community came through for her when she needed it most. Abrams donated her winnings to WOW, the theatre group she spotlighted in her piece, and OurGoods, a barter network for creatives that she co-founded. WOW is putting the donation toward upgrading its lighting system and OurGoods is using the donation to cover the increasing costs of its email service. Abrams says that the most satisfying thing about this experience was getting to share the story of what was, for her, a transformative experience.

“One of the things I understood in that moment was that, when you're deeply rooted in your community, asking for help can actually be as satisfying as giving help,” Abrams says. “It's satisfying to help someone. It gives me joy to help people I'm invested in. Why should I deprive others of that same joy in helping me?”

Evergreen, whose short film, For Barter or Worse: Adventures in Sharing, details her family’s move to upstate New York and how they helped to create a sharing community around them, put the entirety of her winnings into credit at Greenstar Coop, her local food cooperative. She and her partner plan on buying “lots of healthy, natural vegan groceries.” She says that the prize will put a major dent in their annual shopping bill and stresses the importance of supporting coops saying, “Cooperatives in general offer an extremely effective model for emphasizing people over profits and empowering both workers and consumers.” She prioritizes eating locally-grown, organic food and lists the coop, along with the farmers' market and CSAs, as an essential resource.

Congratulations to all the contestants and contest winners who are demonstrating that sharing truly does beget sharing. As Koh says, “Sharing and acts of neighborliness are not just Mr. Rogers’s fever dreams, but an important way to nourish ‘we’ as a community and ‘me’ as an individual.”