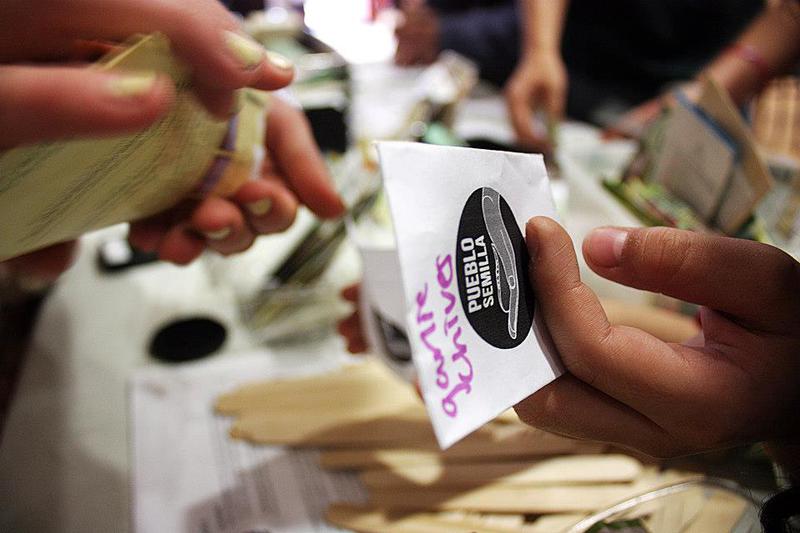 It's challenging enough to explain to a five year old child who has spent his or her whole life in the city that a carrot is a taproot and grows in the dirt. The fact some edible plants are native to the area, yet estranged from the industrial food system is sometimes bewildering even to an adult. I've realized that when advocating for use of local and heirloom seeds for community food and ecosystem resiliency, the preexisting knowledge that a person has is important to understand. An organic farmer will tell you, even in the city, it all starts with the soil right under your feet.

Pilsen is primarily a working class, Mexican-American community in the heart of Chicago. The neighborhood has been subject to industrial pollution, which left the local soil contaminated to the point that it's unsafe to grow food in our backyards. In 2004, a group of Pilsen residents organized to form Pilsen Environmental Rights and Reform Organization (PERRO) in response concerns that two factories were releasing high levels of lead in a family-dense area with over 6000 children. PERRO performed tests for lead and founds some samples that tested more than ninety times the EPA residential screening level though the EPA's records showed that the factories individually were within the legal lead emission limits.

In spite of this, there is a blossoming movement to grow healthy, organic food through urban gardening for food security. Pueblo Semilla is a seed library, sponsored by PERRO in Pilsen, one of several seed library branches in Chicago, that connects individual growers through the exchange of local, heirloom seeds. It started this year with the help of a Shareable seed grant. The library involves an educational component for participants to learn methods of growing, saving and storing seeds from their own crops to put back into the library at the end of the season. Saving seeds that do well locally helps build a resilient stock of seeds that will fare better than most seeds sold on the market, grown far from Chicago's climate and ecosystem, and often designed for high input industrial agriculture rather than small scale backyard gardening. The system is free of monetary gain, and is solely reliant on participation and integrity to keep it going, much like our libraries of books. Each seed saved is a gift donated for a more healthy, food secure future.

As part of the seed bank project, Pueblo Semilla holds monthly workshops on how to garden safely within polluted soil, including where to access and how to make healthy soil. The first of these workshops was on this year’s Earth Day in collaboration with a local community center called Casa Michoacan, a day care center called El Hogar del Niño, Roots and Rays Community Garden, and Alianza Verde, an alliance of community gardens in the neighborhood. The bilingual workshops included a presentation on native animals to this area, an open discussion on soil toxicity, safe gardening, and a seed-starting workshop.

In the Mary Zepeda Native Plants garden, where we started the day, we explained the benefits of growing plants native to Illinois' prairie landscape. At Casa Michoacan, the conversation on soil toxicity raised as many questions as it answered. Yes, our soil is polluted but we are not powerless, and change is possible. Solutions ranged from simple container gardening to building raised beds and more advanced bioremediation with hyper accumulating plants. At the seed-starting workshop, attendees were given the option to plant the seeds that were exchanged in the seed swap in containers or raised beds at home.

On May 2nd, Pueblo Semilla with its first incarnation of the traveling suitcase seed library went door to door. Throughout the route, we met people with a range of experiences and reasons for taking seeds. The first stop was a corner store and tire shop on 18th Street and Leavitt, Angel’s Tire Shop. Outside there were half barrel raised beds and trees growing in life-size toy cars. Other neighbors included a lifelong farmer who has been maintaining his own garden next to his house on 19th Street and Oakley. Another woman had fake flowers taped to her fence, but was enthusiastic about her new radish seeds.

Pueblo Semilla is growing continuously with new people and new ideas – so far we've reached over 70 people! We have planned more workshops this season on gardening and seed starting this year to promote the seed library, while growing our network. We are connecting with larger organizations in Chicago like the Chicago Growing Cooperation and the Chicago Seed Savers, and branching out to local schools, gardens and neighbors in Pilsen. We are learning from and sharing with our neighbors and our environment. Ultimately, we are learning to use what we have to provide everything we need together.

To learn how to start a seed library in your neighborhood, check out Shareable's guide on How to Create Your Own Seed Lending Library and the Center for a New American Dream's webinar.

Protect seed sharing in the United States by signing Shareable's petition here. State governments around the country are regulating seed libraries out of existence. Please help us stop them!

Victoria is a student at the School of the Art Institute of Chicago who is passionate about native plants, urban gardening and environmental justice.

Victoria is a student at the School of the Art Institute of Chicago who is passionate about native plants, urban gardening and environmental justice.