Scenes of Solidarity: Occupying from NY to Oakland - Shareable
Skip to content 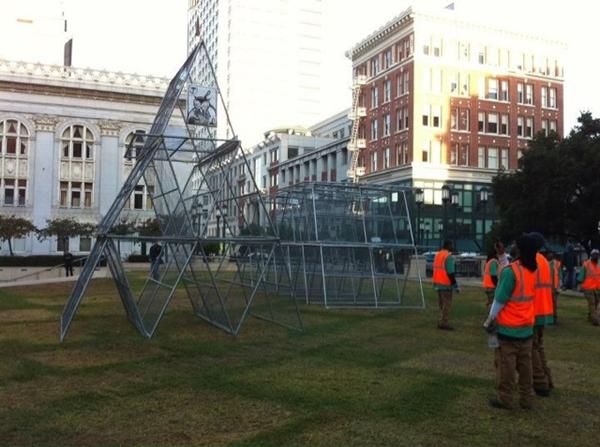 When I arrived at occupied Zuccotti Park last night. I had come for a solidarity march with the occupiers in Oakland who had been the target of a militarized police assault the night before. One occupier, a 24 year old Iraq veteran named Scott Olsen, lay in the hospital in critical condition after taking a "non-lethal" police projectile to the face. It was the worst violence we've seen at any of the occupations, and it left me feeling angry, hurt, and scared.

I grew up in The Bay Area, and it's where I joined my first marches and demonstrations when I was in middle school. The crowds in Oakland no doubt contain some of the older activists who gave a curious 12 year old his first nonviolent direct action training, as well as the friends with whom I marched against the Iraq and Afghanistan Wars. I knew that if I hadn't moved to New York earlier in the year that I would have been in Oakland defending the occupation shoulder to shoulder with Scott. On the ride to Zuccotti I was haunted by the thought that it could easily be me or a friend on a gurney fighting for our lives. It felt (and still feels) like a personal attack, but I wasn't sure if other New York occupiers would feel the same connection to something happening 3000 miles away.

The first thing I saw walking into the park was the huge general assembly, one of the bigger ones I'd seen. They were in the final stages of an aid package of sorts to be sent post-haste to Oakland: $20,000 out of the Occupy Wall Street war chest and 100 tents. Some of theirs had been cut open in the night by police box cutters. The GA consensed and a cheer went up. This is what solidarity means: an attack on one is an attack on all, and we must respond with whatever aid we can muster. The generosity and coordination on display could have taught a lot of governments a few lessons.

A march started circling the park and spilled into the street at the bottom. At other occupations, the police have been more relaxed about letting demonstrators march in the streets, not so in New York. But last night the crowd had a different feeling to it, people chanted "Let's go Oakland!" "Oakland is New York/New York is Oakland!" and "No fear!" When the police tried to herd the crowds back onto the street, we ducked and dodged onto one-way streets. When a line of scooter cops tried to arrest someone, the crowd distracted them by knocking over their unattended bikes. When the police tried to use the infamous orange kettle netting, the march stole it and threw it in the trash. They finally relented, and we marched triumphantly back to Zuccotti. It wasn't a violent or antagonistic march by any means, no broken windows or graffitied banks, but people weren't willing to be pushed out of their streets.

The dedication and bravery I saw in footage of Oakland and on the streets of New York tell me this national and international mobilization isn't going anywhere, winter be damned. It takes creativity and collective strength to turn the system's violence into a better world, but when I see what Oakland did with police fences when they reoccupied, it seems possible.