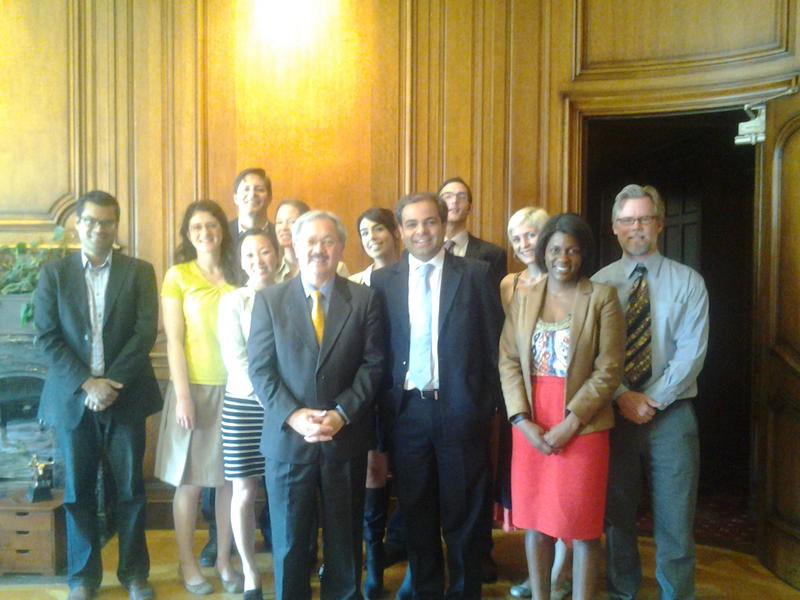 I count myself lucky to have been selected to serve the city with such an accomplished group of fellows. My path to this fellowship started with Shareable’s May, 2011 event, ShareSF, which posed this question to a diverse mix of city leaders – how can we strengthen San Francisco as a platform for sharing? The city’s Chief Innovation Officer, Jay Nath, keynoted ShareSF along with Lisa Gansky and myself. That kicked off a collaboration with the city which included helping to launch the city’s Sharing Economy Working Group at SPUR in March 2012.

My work as a fellow will include publishing a sharing economy policy primer for cities and liaising with the city’s Sharing Economy Working Group. With the primer, I hope to catalyze more policy that supports resource sharing, co-production, and mutual aid in cities. While national governments are slow to address today’s urgent challenges like global warming, many cities have moved ahead. Cities can go even further by helping to set up the necessary institutions for commons-based peer production. In other words, there’s a chance to drive even more transformational change by “open sourcing” our cities.

Below are a selection of the fellows I’ll be serving with. This is an amazing group of people, and I’ve already learned a lot from them. Below the bios is a video invitation to apply for the next fellowship. Please apply!

Rahul Mewawalla has held senior executive roles with Fortune 500 and high growth companies such as Nokia, NBC Universal / General Electric Company and Comcast, Yahoo! and Monitor Group. Rahul is Senior Advisor to the San Francisco’s Mayor’s Office of Innovation. He leads the Mayor’s office of innovation’s efforts across broadband, access, wireless and related information and technology services for San Francisco as the innovation capital of the world. Working with the Mayor’s office, the White House, senior staff, government agencies and departments, Rahul is engaged across public assets and agencies, private corporations, partners, entrepreneurs, coalitions and communities to help lead the growth and progress of San Francisco into the future.

Jessy combines technology and urban development for experimental placemaking. Currently Jessy is "hacking home" through the development of urban community housing for creatives and modern nomads. The Embassy Network is a distributed, shared housing network for those who travel the world to live, work and collaborate. The Embassy also develops open source software and documentation for operating open and shared housing spaces, and works to advance urban housing policy and analysis around high density urban housing.

Krista is a practical optimist seeking to connect creative people with ideas to make cities more livable, socially inclusive, and environmentally sustainable. Krista led national marketing strategies and advised Fortune 500 companies on communicating their environmental commitments during her five years at San Francisco-based renewable energy startup, 3Degrees. In 2012, Krista received funding from the Chilean government program Start-Up Chile to co-found UrbanKIT, a crowdfunding platform for communities and individuals to pitch and raise funding for neighborhood improvement and public space projects. Krista is also a founding partner of Ciudad Emergente, an organization that implements tactical urbanism interventions in combination with social media technologies to encourage citizens to participate in the creation of urban space. Krista received a BA in International Relations and French from the University of Pennsylvania and a Masters in Building and Urban Design in Development from University College London. Follow her on twitter: @kristallakis.

During her fellowship with the Mayor's Office of Civic Innovation, Krista is focusing on Living Innovation Zones, a program through which certain parts of the City will be designated to demonstrate new ways of improving the public realm. San Francisco is building on the success of Open Data and Parklets by engaging the private sector, non-profits and residents in tech and creative innovation to ask: what other City property can be opened for innovation to enhance public benefit?

Most recently, Cory was the CEO of the Hub Bay Area, Hub Ventures and the SOCAP conference. Previously, Cory was the co-founder and CEO of Webcast Solutions, a company that produced some of the first ever webcasts in Africa, the US and Latin America. Prior to Webcast, he co-produced Planetary Dialogues with UNESCO’s World Heritage Center. Cory also co-founded MediaCast, a company that produced many of the first webcasts in the world featuring bands, CEO’s and global leaders. Other companies Cory co-founded in SF include a music recording company and a television production company.

For the Mayor’s Office of Innovation, Cory has helped bring in technologies from companies such as Splunk and Eventbrite to benefit the City. He is helping to organize a roundtable that will help foster the advanced manufacturing/maker movement in SF as well as helping to establish a public/private co-working space within City Hall.