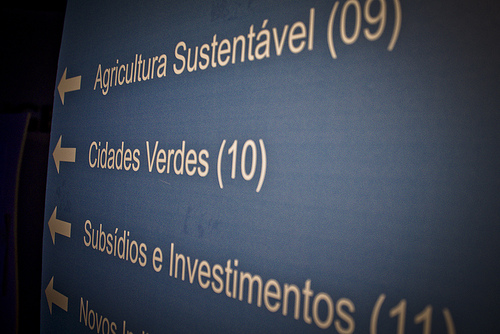 The Rio+20 United Nations Conference on Sustainable Development is an instantly assembled city of 50,000 of the most environmentally attuned members of our species. It is clumped by institutional affiliation, political inflection, age, and profession, strewn about the vastness of the jungle mountain mega-city of Rio de Janeiro and, apparently, managed with the same techniques that the United Nations uses for refugee camps. This is not entirely inappropriate, because all environmentalists are refugees. All human beings are refugees, actually, but only environmentalists know it.

The Earth Summit is physically divided into two camps of white tents: There is the U.N. Summit, which is very removed from downtown and rigorously guarded a la District Nine, and the People’s Summit, which has more informal dress and little orange signs hanging from some of the trees that read AREA DE CONVIVIENCIA or “Area of Conviviality.”

Everything is here – dashikis, Pakistani cameramen, Wen Jia-Bao. Every language is here. Every monstrous accidental thing that human beings are doing to the soil or the frogs is documented in bad Powerpoints made by beautiful, fusty academics; and so is all the work that is being done to bring back the soil and the frogs … by German scientists who study Indonesian fishermen, Peruvian organic-farm economists, scientists and the skeptics, the international aid groups. 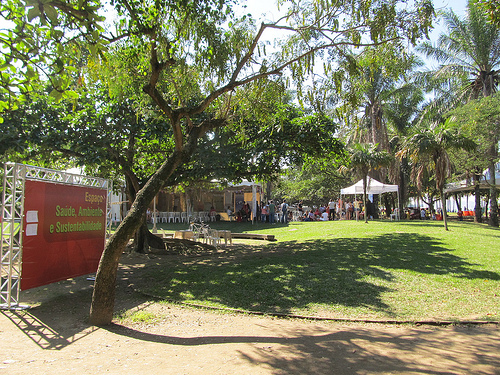 The United Nations document at the center of all of this is an agreement called The Future We Want, under debate and negotiation for a year-and-a-half. Originally, it put forward a couple of major reforms, including:

The first made it to the final draft; the second didn’t. In the interim, 7,000 pages were added in a vast democratic manifesto-writing exercise (that could have been the biggest Googledoc ever), then cut back to the final version. It is a statement of principles – the chief one being that the green economy should balance inequities between rich countries and poor ones.

To the chagrin of possibly half the city, it lacks targets and numbers – the tools that shattered the climate talks. The process of negotiation of this accord is more like “knitting different visions together,” said Maresa Oosterman, Netherlands representative to the U.N. What is important, she points out, is a way for new ideas like the green economy to find their way into the document and be shared. 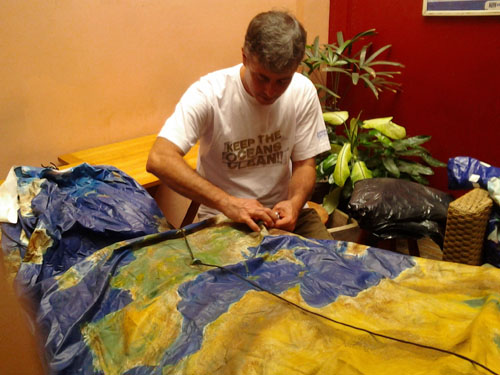 In many ways, our 20th century vision of equality and democracy was the United Nations assembly – all nations, each with an equal voice. But, because of the Internet, the ease of travel, the heightened awareness of globalization’s effect, and other factors, United Nations meetings are the ground on which other structures are built. The U.N. is actually more like a platform, and becomes more so with each international environmental conference.

The concentric circles of activity around the agreement itself are vast: the Major Groups; topical plenaries on oceans, mountains, etc.; the plenary assembly process at the People’s Summit; the media; the business groups; scientists of all categories. There are no less than four separate social media platforms built for them.

And the U.N. Environment Program is aware of this – as befits a platform, it is touting not its own work, but the number of partnerships entered into by other entities in Rio. (They even have a counter going on their website, and we’re all asked to register.) It’s generative, and has already proven much more complex than a simple UN-versus-protesters scene. The question is, really, can the global become local? What happens when this city disbands and goes home?