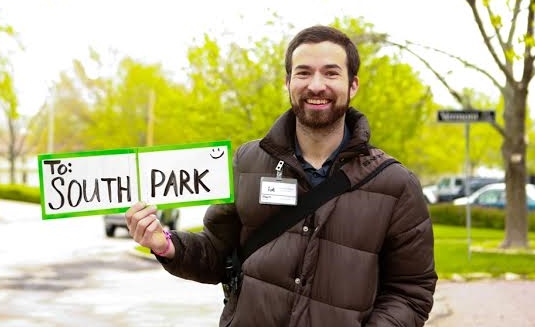 What I love best about the sharing economy is how it squeezes good value out of the unused bits of our society that would otherwise go to waste. And nowhere do you have so much waste as in our transportation system. A personal car uses less than 1% of its energy to move a passenger, and 80% of our passenger capacity is driving around empty. That’s hundreds of millions of empty seats in this country! Meanwhile, 45% of the country has no access to transit. What a perfect opportunity to share!

Of course, plenty of smart people are already employing new Smartphone apps to put those empty seats to work. For example, I could use the Lyft or Uber apps to call up a citizen taxi, or download the Carma app to share my morning commute. That is, I could do these things if I lived in a big city like San Francisco or Austin. Unfortunately, I live in rural Northeast Kansas where we have neither transit, nor the critical mass of people needed for those apps to work well.

We denizens of the countryside have historically accepted a big trade-off. Peaceable enjoyment and low housing costs come at the price of a tremendous amount of driving. And when the car is our only option, we are incredibly vulnerable to high fluctuations in the price and disruptions in the supply of gas. I spent two years grumbling about all the driving, but feeling helpless to do anything about it.

Then I heard a radio podcast about hitchhiking and how it’s not nearly as dangerous as the media have led us to believe. The point was made that  hitchhiking is such an easy, cheap and flexible way to get around – in many countries it's a primary mode of transit. So the show argued, we should give it another chance. For some reason, this idea grabbed me so fiercely that I thought about little else until I had designed a way to do just that – mainstream hitchhiking and make it safe, easy, reliable and fun. What I came up with was a nonprofit organization that I called Lawrence OnBoard.

Here’s how it works: participants can sign up as riders or drivers or both. Drivers can sign up for free. They get a window cling with their member number. Riders pay a membership fee and we provide them with a background check, a photo ID and a folding dry erase board branded with the club logo. The rider can write his destination on the board, stand by a safe roadside, hold up the board and wait for a passing car to stop. The rider can then text in the driver’s member number (or license plate number if the driver is not a member) to Lawrence OnBoard. That makes a record of the ride which is important as a safety backup, as a way to leave feedback and it enters the driver in a drawing for a prize. The prize is a fun incentive for the driver that doesn’t require an awkward cash transaction and doesn’t turn the driver into an unlicensed taxi service. Lawrence OnBoard will provide training, a map of good locations, and a marketing campaign.

That’s the plan, and in 2013, I conducted field tests to see if it could work. 23 volunteers went out on 121 test rides in and around the Lawrence area and the results were pretty astonishing. Even with random strangers picking up, 95% of the volunteers got a ride in less than half an hour, and our average wait time was less than seven minutes! In some prime locations, we could reliably get a ride in less than two minutes. When I saw these results, I know we were onto something.

I personally used my dry erase board to commute to town for most of the summer and I found that it was safe, easy, and reliable and saved a lot of gas. But even better, I met more of my neighbors, learned what was happening in the neighborhood and even made a couple of business deals. Building community like this is the big strength of the sharing economy and it’s something we are sadly missing when we all drive alone.

Of course, this ridesharing concept does have its limitations. One shouldn’t do it at night, it’s not good for transporting small children, and riders need to be over 18 and use good judgment. We still need to conduct another season of research to back up the preliminary findings and continue to test and map good locations to ride from. We’re also raising funds through grants and some crowdfunding to launch a pilot, hopefully before the end of the year. You can help our efforts by making a donation at RocketHub. 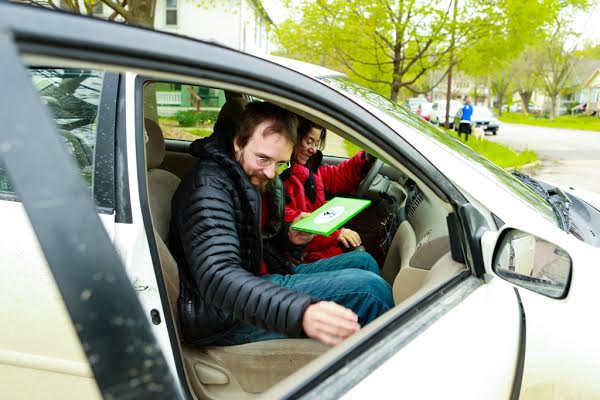 Americans are eager for better transportation solutions. The carless college students in Lawrence, environmental conscious families who want to pare down to one car, and populations who can’t drive are especially interested in this project, since it focuses on short, local trips. When I presented the research findings to the Transportation Research Board I got an enthusiastic response from transportation professionals all across the country. Lawrence OnBoard has been featured on podcasts, public radio stations, blogs and the news. Most recently, we were named a finalist in the TEDxFulbright Social Innovation Challenge and got to pitch the idea on a TED stage!

We are so fortunate to live in this modern age. With the tools and technology currently at our disposal and the power of the sharing economy, we now have the chance to build a brand new model for public transportation. Imagine a network of neighbors driving neighbors. This network is nimble and can fill in the gaps between trains, buses and bikes. It’s cheap and efficient because it makes better use of the cars already on the road. And it’s a transportation system that’s built on our best resource – our human kindness.

Check out on our progress at www.lawrenceonboard.org.

See you on the road!

Jennifer is CEO of the nonprofit, Lawrence OnBoard, and the owner of CASA Kids Studio in Lawrence, KS.

Jennifer is CEO of the nonprofit, Lawrence OnBoard, and the owner of CASA Kids Studio in Lawrence, KS.