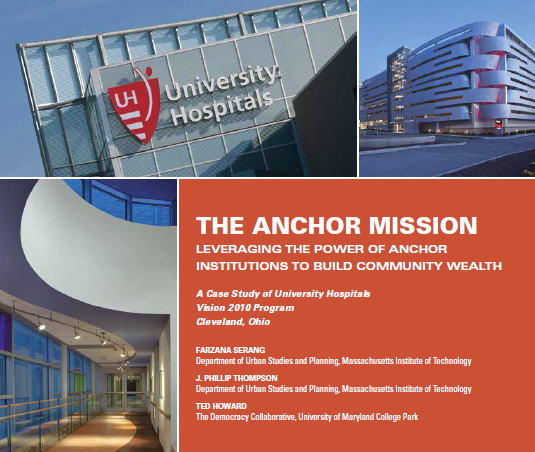 In Cleveland, Ohio, and its surrounding areas, a $1 billion test initiative, dubbed the Vision 2010 Program by University Hospitals (UH), has surpassed three of its four economic stimulation goals. A new report from The Democracy Collaborative and the Department of Urban Studies and Planning at MIT looks at how the Vision 2010 Program, over a five-year span, succeeded in empowering minority- and woman-owned businesses and boosting community-centric businesses. 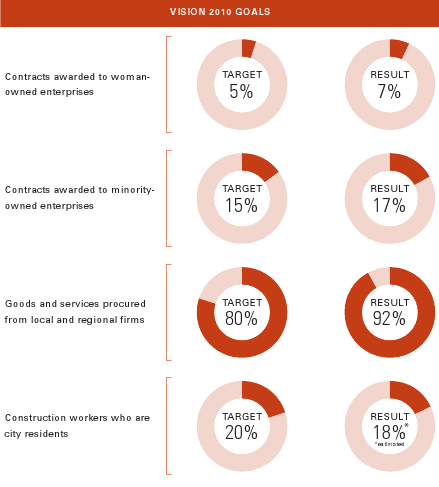 During the recent economic turbulence, Cleveland — like so many industry-based American cities — suffered rising poverty and unemployment levels. The Office of the Mayor responded, with support from UH and local trade unions, by rolling out Vision 2010 in order to stimulate the local economy.

As the program's anchor institution, UH shifted its focus to its community and leaned into a mission "to consciously apply the long-term, place-based economic power of the institution, in combination with its human and intellectual resources, to better the long-term welfare of the community in which it is located."

Beginning in 2005, University Hospitals set out to build five major medical centers and expand a numerous other existing facilities. Of the total $1.2 billion Vision 2010 budget, $750 million went toward construction.

(1) including as many local minority- and female-owned businesses as possible;

(2) achieving an economic multiplier effect by directing as much spending as possible toward businesses based in the City of Cleveland and the greater Northeast Ohio region;

(3) producing lasting change in Northeast Ohio by pioneering a “new normal” for how business should be conducted by the region’s large institutions.

As a result, some 5,000 construction jobs were created (with salaries totaling $500 million) and 110 minority- and female-owned businesses landed contracts. A Project Labor Agreement and third-party monitoring helped ensure that the diversity goals were met. The Agreement now serves as a template for a historic Model Community Benefits Agreement being used by the City of Cleveland.

Other long-term effects of the program continue to ripple out across the whole University Hospitals milieu: "For example, all purchases over $20,000 now require at least one bid from a local, minority-owned firm. Given that University Hospitals’ annual spend is in excess of $800 million, this practice should produce considerable local economic value and job creation in a region that sorely needs it."

The report goes on to examine how the Vision 2010 Program has set a standard and become a roadmap for anchor institutions in other cities that aim to support and build their local communities in accordance with their anchor missions.