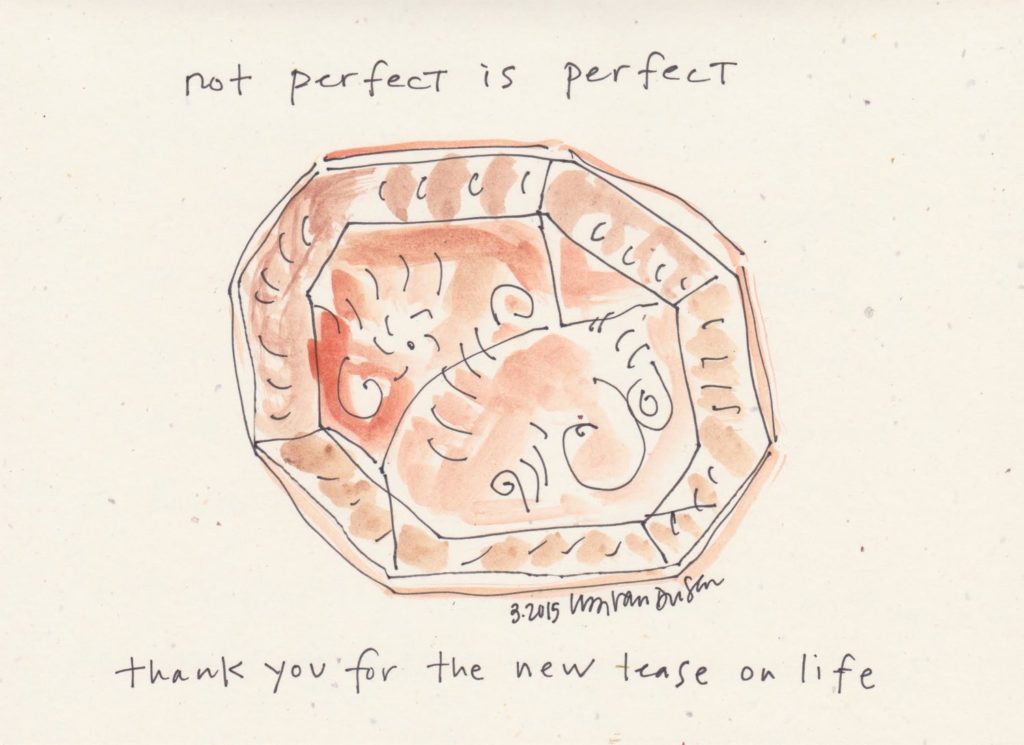 Actually, in Silicon Valley, some engineers do still work with their hands, some people appreciate the beauty in broken things and some people help each other for free for the fun and good will of it. Here's a story of how that happened all at once for me.

One of my guiding beliefs was best articulated by our son, Ben, at age 10: "Not perfect is perfect. Perfect is not perfect." I was hanging a bulletin board in Ben's room and doing that thing where you keep tilting it back and forth slightly — skewing a little too much to one side and then the next, never quite getting it level. Finally, Ben calmly uttered those words. I took a medium deep breath, as if to mostly acknowledge that he was totally right and just how ridiculous my pursuit of the perfect had been in a situation without much import. My Virgoian tendencies were overplaying. We were done. I felt better and Ben's bit of 10-year-old wisdom stuck with me.

Enter the piece of Mexican pottery depicted above. This belonged to my grandparents and, despite its sentimental value and somewhat fragile nature, I used it a lot. I believe in using things, even if they might break in the process. And I feel good about that — until something breaks and then I second guess myself sometimes, thinking "I should have gotten one of those plate hanger things and just hung it on the wall. It would still be in one piece."

Now enter the Repair Café. In the summer of 2013, Peter Skinner, a Silicon Valley serial entrepreneur whom I've known for many years, reached out to talk about a phenonmenon born in the Netherlands that had caught his fancy — a grassroots effort to connect people with items in need of repair with people who loved to fix things. He wanted to start a Repair Café in Palo Alto. Why? So that people would fix their possessions rather than rush to send broken stuff to landfill; so that engineers who were managing people or had become VCs could get their hands back in the game; so that people could connect, build community, and have fun together. So everybody could go home after a visit to the Repair Café a little bit happier. We had iced tea in our back yard and talked about how that might work, what it might take to get it off the ground. Suffice to say, Peter pulled it off with a merry band of friends and enthusiastic volunteers. 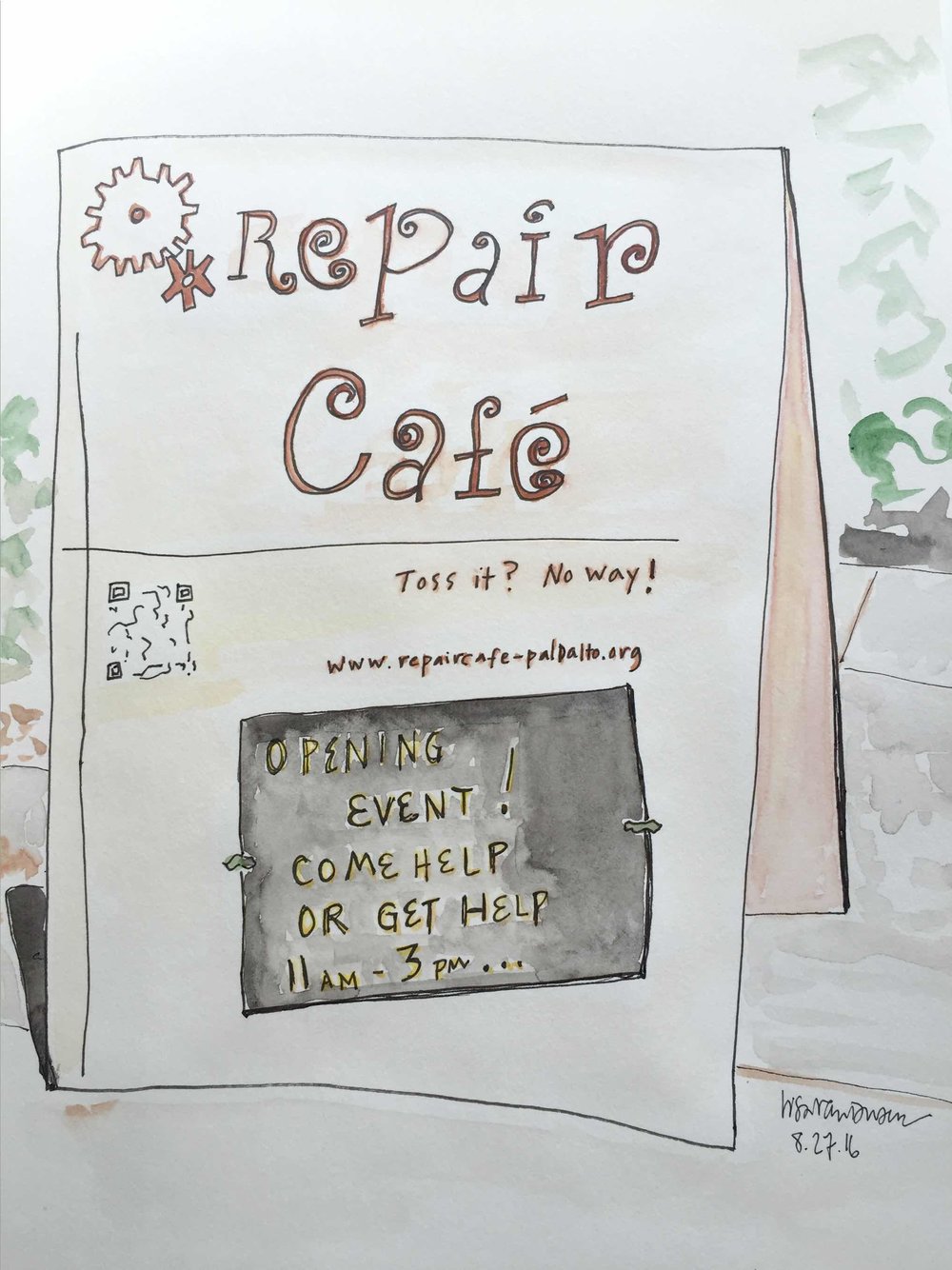 A key partner in this whole undertaking is Hassett (Ace) Hardware and Richard Hassett who has brought the hardware store in as an official partner. On one of my visits to the Repair Café, he was summoned as the glueing expert (among a squad of other competent gluers) when I showed up with all my ceramic pieces in a ziplock bag. Richard was the big gun. Fast forward: Richard knew just what to do and told me step-by-step what to do. The hitch for me was that it sounded like it was going to take the better part of a week or more, glueing and supporting one piece per day. Although I thought I could do it, I did not think I would do it. I am an asker. I asked Richard if he would be willing to do the glueing — and that I would be happy to pay him to do so. He said he would be happy to take on this labor of love and that I did not need to pay him. In fact, he didn't want me to pay him.

Fast forward again: Richard sent me photos of the daily progress via text all week — like reports on one's child from a camp counselor. Cheerful dispatches from the Gluer showed my beloved ceramic vessel coming back to life under the careful handy work of this repair angel.

Now fast backward to the Japanese art of making things from broken pottery: Kintsugi. While my repair job doesn't have gold in the repair cracks, it is beautiful and now does hang on my wall in one of those plate hangers as a reminder that "not perfect is perfect and perfect is not perfect."

"Kintsugi can relate to the Japanese philosophy of "no mind" (無心 mushin ?) which encompasses the concepts of non-attachment, acceptance of change, and fate as aspects of human life. It encourages the notion of highlighting the beauty of broken things and keeping them even when they may not seem useful." (Flickerwick: The Aesthetics of Mended Japanese Ceramics, Christy) And, in Silicon Valley fashion, the Maker folks like the concept, too: "seeing the beauty in broken things."

"Wait a minute," you might ponder. What about Marie Kondo and The Art of Tidying Up and getting rid of all that stuff doesn't spark joy? [Note: I have not done that.]

Well, this Mexican pottery glued by Richard Hassett courtesy of the Repair Café, fond memories of my grandparents, and our son's bit of wisdom all spark joy.

Article and images cross-posted from LisaVanDusen.com.

Lisa Van Dusen is a practicing artist, the creator and host of First Person, a civic engagement champion and a social impact evangelist at SV2—Silicon Valley Social Venture

Lisa Van Dusen is a practicing artist, the creator and host of First Person, a civic engagement champion and a social impact evangelist at SV2—Silicon Valley Social Venture Fund. Lisa is also particularly passionate about the arts as a catalyst for social change and creating models for resilient communities in the face of climate change. A native Michigander, she has called Palo Alto home since the pre-internet era. Lisa first put down roots in Palo Alto as the founding executive director of Cable Co-op, and among other pursuits, went on to birth and lead Palo Alto Online, relaunch Leadership Palo Alto and hold numerous civic leadership roles in Silicon Valley. Lisavandusen.com is a platform for her voracious curiosity, fearless question-asking, and desire to learn.