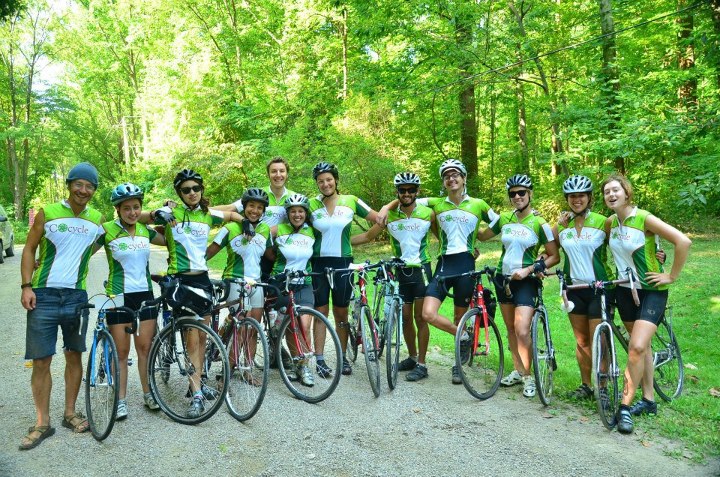 This is an update from Co-Cycle, a student bike tour celebrating co-ops. This entry was written by Riko Fluchel a couple of weeks before the end of the Co-Cycle trip and was originally published at www.co-cycle.coop/archives/935. Co-Cycle celebrated the last day of its cross-country journey on Saturday, September 1 in Amherst, Massachusetts.

A curious shift occurred as Co-Cycle made its way through the Midwest. We have begun to articulate what exactly it is we’re learning—we’re asking more in-depth questions as we meet more co-ops; we are beginning to make connections between different models, whether consumer or worker owned; and, on the flip side, more people are asking us in-depth questions about our model, process, and how we began and what we’ve learned. Our identity is still forming, but, as compared to the first half of the tour, Co-Cycle is beginning to grasp the impact and importance of its own mission.

The Midwest has a strong history of cooperatives, beginning with Scandinavian immigrant farmer co-ops. At this point we have visited over 50 cooperatives, so it makes sense that we are beginning to really get a sense of what it takes to be a cooperative, and to see the many different manifestations of cooperative principles: from credit unions, bakeries, bike shops, mental health care clinics, engineering and manufacturing centers, to coffee roasters and bicycle delivery services—we have stumbled upon a whole alternative economy made up entirely of cooperatives, who, guided by Principle 6 (cooperation among cooperatives), strive to support each other by buying each other’s services and products.

The past few weeks have been peppered with many busy but tremendous occasions: from seeing all these cooperatives in one space together in multiple towns and cities as they connect and organize; having the pleasure of presenting the United States Federation of Worker Cooperatives’ endorsement of legislation to increase the lending cap of credit unions to 27.5% to the Credit Union National Association; and consequently, Mayor Soglin of Madison declaring August 6-10th ‘Co-Cycle Week’ in Madison. All of this has given us a sense of success—indeed, it is already so much more than we could have imagined when we were planning and organizing throughout the fall and winter. We are giving co-ops an occasion to talk to each other, organize together, and strengthen themselves, each other, and therefore the overall movement. This is perhaps best exemplified in Madison, where we witnessed the signing of articles to make MadWorC, previously merely a network of cooperatives in Madison, into an actual cooperative of cooperatives.

I can’t help but to think of the future: what will Co-Cycle look like when this tour is over in less than 3 weeks? What will we do with all the networks we have built? What will we do with all the knowledge and skills we’ve acquired? How will we continue to educate, network and contribute to the cooperative movement? And, how do we continue to think critically so that we can maximize the cooperative model’s potential for social justice for all groups of people? We’ve had too few discussions about race, gender, and sexuality in the cooperative movement as it exists now, even though many of us are so oriented towards these critical questions and discussions regarding systems of power and oppression. It is my personal goal to keep Co-Cycle an organization geared towards critical thinking and problem solving, which includes showing the potential for cooperatives as a business model that can empower people of color, immigrants, women, and LGBT/queer communities.

We have seen so many examples of how co-ops (particularly worker co-ops) have empowered individuals, and in extension, entire communities during times of struggle. The therapists of Center Point Counseling Services in Viroqua, WI, resigned from a conventional agency after the clinic failed to break even. The group then formed a worker-owned cooperative, revitalizing the love they had for their profession and serving their community, whether clients are insured or not. Union Cab in Madison, WI, a worker co-op since 1979, has been a long-time champion for worker rights, and, via taxi cab parades, showed its support for protests last year over Governor Walker’s decision to eliminate collective bargaining rights as a part of the budget repair bill. Just Coffee Cooperative in Madison, WI, seeks to support coffee farmers in Central and South America by creating their own standards of Fair Trade coffee so that those small farmers can make a profit and afford certification—and in an attempt to increase their transparency, Just Coffee’s products have a label at the bottom of the bag which can be used to track where exactly the coffee was grown, who grew it, when it was roasted, and how much of the money you pay for each bag of coffee goes directly to the farmer.

A year ago I didn’t know what a cooperative was. Now, after the nine weeks of touring cooperatives across the continental United States, I know firsthand that cooperatives empower people’s lives. In this historical moment of social unrest and fluctuating forms of economic oppression, I’m beginning to see a possibility, a hope, of really making things better: by eliminating the cost of upper management and organizing into worker-owned collectives and cooperatives, where the employees write the rules, vote on every decision, decide the wages, and actually have a stake in their business, care about the work they do, and serve their community at the same time. In response to the recent economic crisis and the Occupy movement that followed, I suggest a shift towards a worker cooperative economy as a viable solution.

The Co-cycle Project is a youth-led, bike-powered tour linking co-operatives across the United States. Through workshops and public events, we encourage the greater communities we travel through to take notice,

The Co-cycle Project is a youth-led, bike-powered tour linking co-operatives across the United States. Through workshops and public events, we encourage the greater communities we travel through to take notice, ask questions, and seek out connections with their own local co-ops. We educate ourselves and each other, generate research on different co-operative models, strengthen regional co-operative networks, and draw attention to co-operatives as economic, social, and ecological alternatives to conventional business models.