Recap: Douglas Rushkoff on what being on "Team Human" means - Shareable
Skip to content 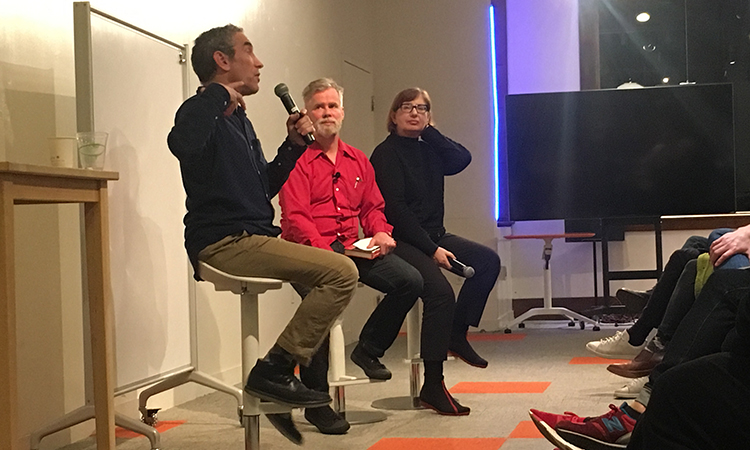 On Monday, I had the honor of co-hosting a public discussion with renowned media theorist, podcast host, and author Douglas Rushkoff about his new book, "Team Human," along with Marina Gorbis of the Institute for the Future in downtown Palo Alto, California.

I had been looking forward to this event as Rushkoff has carved out a unique place in Shareable's history. He's been incredibly supportive of Shareable from our beginning nearly ten years ago when almost no one knew us. He's written for us, spread word of our work, helped us find funding, and currently serves as an editorial advisor. Very few of his caliber have given so much of themselves to Shareable for so long. His book, "Team Human," might explain why. While our worldviews overlap quite a bit, there's a specific and deeply held joint belief that connects us — since society is human made, it can be remade by us to serve us better. In other words, humans are in charge of our own destiny.

This sounds almost too simple, yet we've arrived a cultural moment where this kind of basic medicine is needed. "Team Human" provides a necessary antidote to a disempowering narrative that not only propelled Silicon Valley to superpower status, but now is firmly entrenched in popular imagination — that technology is the driving force in human history, not humans. This story has a name, technological determinism.

With the "Team Human" book and tour, Rushkoff draws a line in the sand that says enough, we should reject technological determinism. We should stop replacing ourselves with robots, algorithms, and platforms that strip mine our minds, relationships, and communities. It's time to "re-assert the human agenda" and save ourselves. 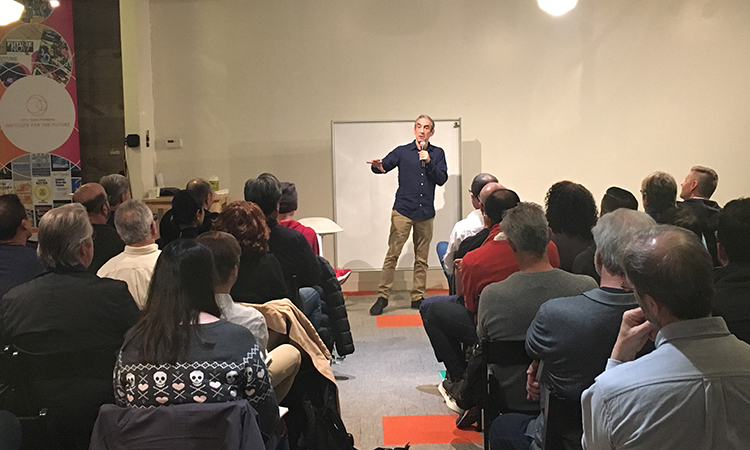 On this particular night, however, Rushkoff began his talk by suggesting an even more fundamental starting place to the 70 or so people there. In his characteristically animated way, he invoked the late Fred Rogers, host of the television show "Mister Rogers' Neighborhood," who used to say that we're fine just the way we are. We should insist on the dignity of all humans. We have inherent value, period. We don't have to earn it. And if we insisted on that, we wouldn't create technologies that use us at every turn, that learn about us only to use that information against us.

He shared many other ideas that articulated team human in an expressionistic way. The medium was definitely the message. His incredible, rapid fire stream of ideas wasn't rehearsed or neatly organized. Rushkoff was refreshingly wild. His talk was a funny, insightful, and vulnerable high wire act that kept the audience rapt.

Three points stood out to me:

All in all, the night was an inspiring call to reclaim our humanity, take charge of our destiny, and save ourselves by working together. Using story, theory, and analogy, Rushkoff reflected back to us the situation we find ourselves in and the possibilities for something different. And by being such a great ally to Shareable and a daring public intellectual, Rushkoff walks his "Team Human" talk. Hearty thanks go to other stellar members of Team Human including co-host Marina Gorbis and co-organizer Julie Ericsson of the Institute for the Future and the many Shareable friends who joined the discussion. 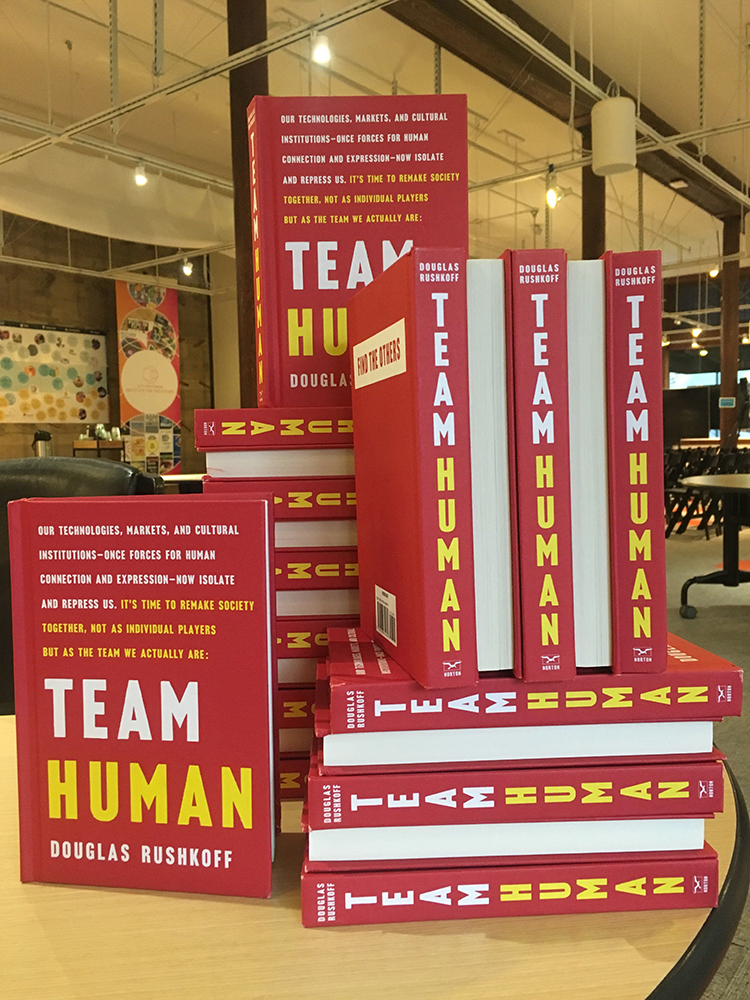 All images provided by Tom Llewellyn