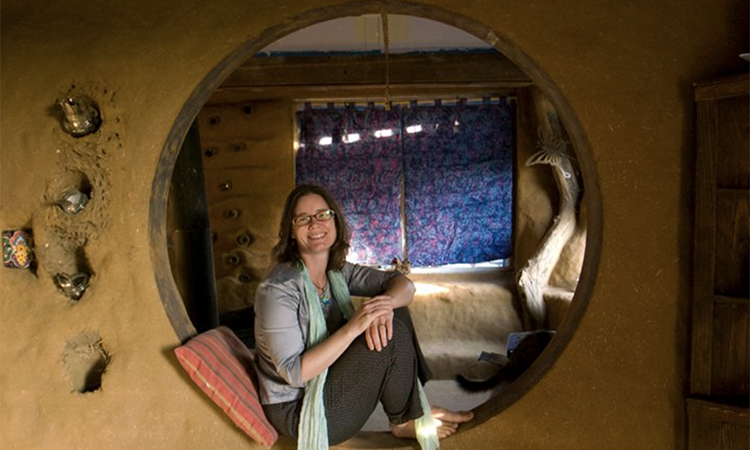 In her book "Together Resilient: Building Community in the Age of Climate Disruption," activist Yana (Ma'ikwe) Ludwig explores the importance of grassroots action in addressing issues like climate change and other critical challenges. In particular, she explores how projects such as intentional communities can have a significant impact on reducing carbon emissions while simultaneously providing many benefits to those within the community. The idea, she argues, is that political action doesn't have to mean sacrifice. In fact some of the most important actions can be the same ones that increase wellbeing. Cooperative cooking, for example, is not just a way of freeing up time — it can also be a strategy to use less energy. We talked to Yana Ludwig about the intentions behind her book and the larger vision contained within it.

Robert Raymond, Shareable: So what inspired you to write "Together Resilient"?

Yana (Ma'ikwe) Ludwig, activist and author: I wanted to introduce into the climate disruption dialogue the idea that we don't necessarily have to only be addressing things at the large-scale political level. I see a lot of people in the intentional community who are really devaluing what they're doing — like they don't get it, that what's happening in these communities’ movements is actually a potentially really powerful tool, both around climate disruption issues as well as around social justice issues. And I was seeing a lot of people who were sort of buying into the stereotype [that] the people who were doing intentional communities were like flaky hippies or something and were just sort of disappearing onto a piece of property somewhere and checking out. That actually to me is the exact opposite of what is happening in the communities movement. So part of my motivation was sort of re-legitimizing the intentional community as a really powerful political and social tool.

In the book you profile the Dancing Rabbit Ecovillage in Missouri, which has set for themselves the goal of reducing their emissions down to 10 percent of the U.S. average. They do this through a number of different strategies, including cooperative cooking and car sharing. But far from being actions that seem like sacrifices, they're actually enhancing their quality of life.

There's a tremendous amount of social benefit that come from doing the right thing ecologically. It's a high quality, socially connected, really good life, and they're doing it on 10 percent. I was at Dancing Rabbit for eight years, and I was part of one of these feeding co-ops and basically I would make dinner once a week, and every other night I would just show up and eat. That's not only way more efficient in terms of my personal energy, but it's also a lot more ecologically sound because if you're cooking for a big group of people you get a lot of savings in terms of the amount of fossil fuels or electricity you’re using. These strategies are social structures. There's nothing fancy about them, there's no special equipment involved. It's just people who are getting together and using cooperation as a concrete tool for getting their tangible needs met. These are the models that I think we need to be looking to for how do would we actually structure things so that we're living an ecologically sound life and also so that we're living with more resilience.

So we've explored a bit about how intentional living can be an important tool in the larger toolbox of addressing large-scale issues like climate change. How else does this kind of living contribute to your ability to make positive impacts on the world?

The work that I'm doing with my little collective — we have about ten people who are living on this property together right now — the work that we're doing is feeding our activism and our analysis when we show up at rallies, when we vote, when we are out there actively resisting the violence that's increasingly happening in our culture. My community is my battery pack for being able to do that work. Intentional community is a kind of activist reservoir where we're building personal economic security. We're building internal resilience. We're also in a place where often our lives are much more flexible than if we were plugged into the standard 9 to 5, capitalistic world. A lot of activists from intentional communities, for instance, were able to pick up and go to Standing Rock and support that on the ground because they had a community that had their backs and would watch their house and take care of their gardens and their dogs and do whatever else needed to happen to free people up to do that. There's actually a very direct connection between the kind of activist work that can be happening at the grassroots and the kind of activist work that can be happening on the frontline, directly confronting fascism and capitalism.