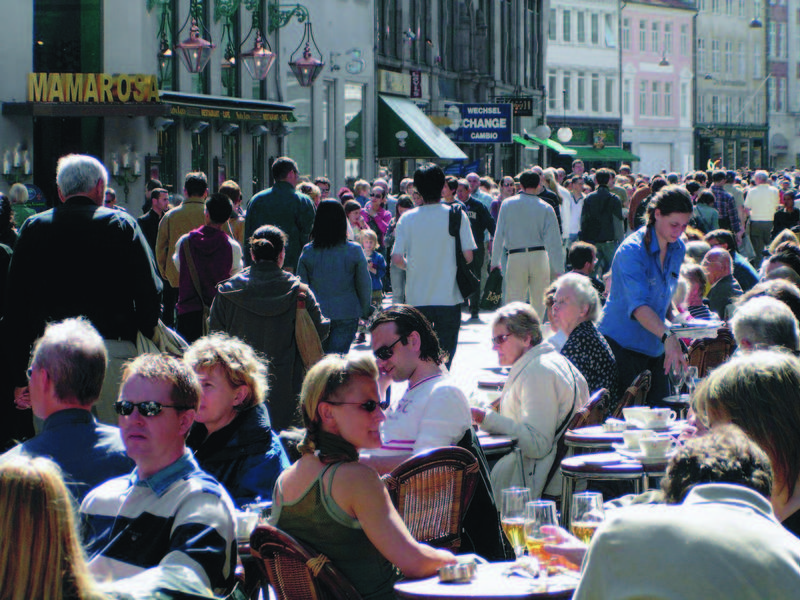 Public space is a literal commons: the common ground where people come together as friends, neighbors and citizens. Places we share together—parks, streets, sidewalks, squares, trails, markets, waterfronts, beaches, museums, community gardens, public buildings and more—are the primary sites for human exchange, upon which our communities, economy, democracy and society depend. After years of neglecting public spaces as old-fashioned and unnecessary there is a growing realization of how important lively, appealing gathering places are to every aspect of our lives.

It’s a dark and wintry night in Copenhagen, and the streets are bustling. The temperature stands above freezing, but winds blow hard enough to knock down a good share of the bicycles parked all around. Scandinavians are notorious for their stolid reserve, but it’s all smiles and animated conversation here as people of many ages and affiliations stroll through the city center on a Thursday evening.

A knot of teenage boys, each outfitted with a slice of pizza, swagger down the main pedestrian street. Older women discreetly inspect shop windows for the coming spring fashions. An accomplished balalaika player draws a small crowd in a square as he jams with a very amateur guitarist. Earnest young people collect money for UNICEF relief efforts. Two African men pass by, pushing a piano. Candlelit restaurants and cafes beckon everyone inside.

“Cultures and climates differ all over the world,” notes architect Jan Gehl, “but people are the same. They will gather in public if you give them a good place to do it.”

Gehl, an urban design professor emeritus at the Danish Royal Academy of Fine Arts and international consultant, has charted the progress of Copenhagen’s central pedestrian district since it opened in 1962. At that time cars were overrunning the city, and the pedestrian zone was conceived as a way to bring vitality back to the declining urban center. “Shopkeepers protested vehemently that it would kill their businesses,” he recalls, “but everyone was happy with it once it started. Some now even claim it was their idea.”

The pedestrian zone has been expanded a bit each year ever since, with parking spaces gradually removed and biking and transit facilities improved. Cafes, once thought to be an exclusively Mediterranean institution, have become the center of Copenhagen’s social life. Gehl documents that people’s use of the area has more than tripled over the past 40 years. The pedestrian district is now the thriving heart of a reinvigorated city.

Copenhagen’s comeback gives hope to people around the world who want to make sure that lively public places don’t disappear in this era of rampant traffic, proliferating privatization, heightened security measures, overpowering commercialization and the general indifference of many who think the internet and their own families can provide all the social interaction they need. There’s an emerging movement to protect these commons— literally common ground— as places all of us can use and enjoy.

Why We Abandoned the Public Realm, and Why We Need It Again

While only a century ago streets almost everywhere were crowded with people, many are now nearly empty—especially in the fast-growing suburbs sprouting all over the globe, but in some older towns and cities, too. Walking through the center of certain North American communities can be a profoundly alienating experience, as if the whole place had been evacuated for an emergency that no one told you about. Even in the crowded urban quarters of Asia and Africa, public spaces are suffering under the onslaught of increasing traffic and misguided development plans imported from the West.

The decline of public places represents a loss far deeper than simple nostalgia for the quiet, comfortable ways of the past. “The street, the square, the park, the market, the playground are the river of life,” explains Kathleen Madden, one of the directors of the New York-based Project for Public Spaces, which works with citizens around the world to improve their communities.

Public spaces are favorite places to meet, talk, sit, relax, stroll, flirt, girlwatch, boywatch, read, sun and feel part of a broader whole. They are the starting point for all community, commerce and democracy. Indeed, on an evolutionary level, the future of the human race depends on public spaces. It’s where young women meet and court with young men—an essential act for the propagation of the species. Numerous studies in fields ranging from social psychology to magazine cover design have proved that nothing grabs people’s attention more than other people, especially other people’s faces. We are hard-wired with a desire for congenial places to gather. That’s why it’s particularly surprising how much we overlook the importance of public places today.

“If you asked people twenty years ago why they went to central Copenhagen, they would have said it was to shop,” observes Jan Gehl, sitting in the former navy barracks that houses his “urban quality” consulting firm GehlArchitects. “But if you asked them today, they would say, it was because they wanted to go to town.”

That small change of phrase represents the best hope for the future of public spaces. Historically, Gehl explains, public spaces were central to everyone’s lives. It’s how people traveled about town, where they shopped and socialized. Living in cramped homes, often with no yards, and certainly no cars or refrigerators, they had little choice but to use public spaces. Walking was most people’s way to get around. Urban families depended on markets and shopping districts for the day’s food. Parks were the only place for kids to play or see nature. Squares and churches and taverns were the few spots to meet friends.

But all that changed during the 20th century. Cars took over the streets in industrialized nations (and in wide swaths of the developing world too), putting many more places within easy reach but making walking and biking dangerous. Towns and cities spread out, with many merchants moving to outlying shopping malls. Telephones, refrigerators, television, computers, and suburban homes with big yards transformed our daily lives. People withdrew from the public realm. No longer essential, public spaces were neglected. Many newly constructed communities simply forgot about sidewalks, parks, downtowns, transit, playgrounds, and people’s pleasure in taking a walk and bumping into their neighbors. Today, many folks wonder if public spaces serve any real purpose anymore.

“Some places have gone down the drain and become completely deserted.” Gehl notes, brandishing a photo to prove his point. “See this, it’s a health club in Atlanta, in America. It’s built on top of seven storeys of parking. People there don’t go out on the streets. They even drive their cars to the health club to walk and get exercise.

“But other places have decided to do something about it; They fight back,” he adds, pointing to another photo—a street scene in Norway, where dozens of people are enjoying themselves at an outdoor cafe alongside a sidewalk filled with passersby.

Barcelona vividly illustrates the power of public spaces. Once thought of as a dull industrial center, it is now mentioned in the same breath as Paris and Rome as the epitome of a great European city. The heart of Barcelona—and of Barcelona’s revival—is Las Ramblas, a beloved promenade so popular. In the spirit of liberation following the end of the Franco dictatorship, during which time public assembly was severely discouraged, local citizens and officials created new squares and public spaces all across the city and suburbs to heal the scars of political and civic repression. Some of them fit so well with the urban fabric of the old city that visitors often assume they are centuries old.

The key to restoring life to our public places—and our communities as a whole—is understanding that most people today have more options than in the past. A trip downtown or to the farmer’s market or the local library is now recreational as much as it is practical—the chance to have fun, hang out with other folks, and enjoy the surroundings.

“People are not out in public spaces because they have to but because they love to,” Gehl explains. “If the place is not appealing they can go elsewhere. That means the quality of public spaces has become very important. There is not a single example of a city that rebuilt its public places with quality that has not seen a renaissance.”

But Gehl, along with Project for Public Spaces (PPS) and other advocates for better community places, do not want to be misunderstood here. When they say “quality” they mean the quality of a public space as a whole, not just the artistic quality of its design.

At the same time as many public spaces around the world are deteriorating, there has been something of a boom in lavish new projects masterminded by big-name designers. Frank Gehry’s Guggenheim Museum in Bilbao, Spain, launched the trend, which has been continued by high-profile projects like Rem Koolhaas’s Euralille project in Lille, France, and the new public library in Seattle (also by Koolhaas). While very successful in generating buzz in architectural circles and the media, none of these landmarks of “iconic” architecture stand out as a particularly great spots to hang out and enjoy yourself . The emphasis on aesthetic style too often overshadows the basic function of serving people’s needs.

Aesthetic quality is just one on a list of 12 steps Jan Gehl devised as a guide to evaluating public spaces (see accompanying list below), which includes such prosaic but important matters as providing shelter from inclement weather and offering a spot to sit. “There are new building materials today that I think can help us create attractive new public places,” notes PPS’s Kathleen Madden, “but the process of creating great place is just as it’s always been: make a nice place with lots of things for people to do.”

12 Steps to a Great Public Space

This is updated from an article first appearing in Ode magazine