Reimagining Onagawa: a new path forward after the triple disaster of 2011
Skip to content 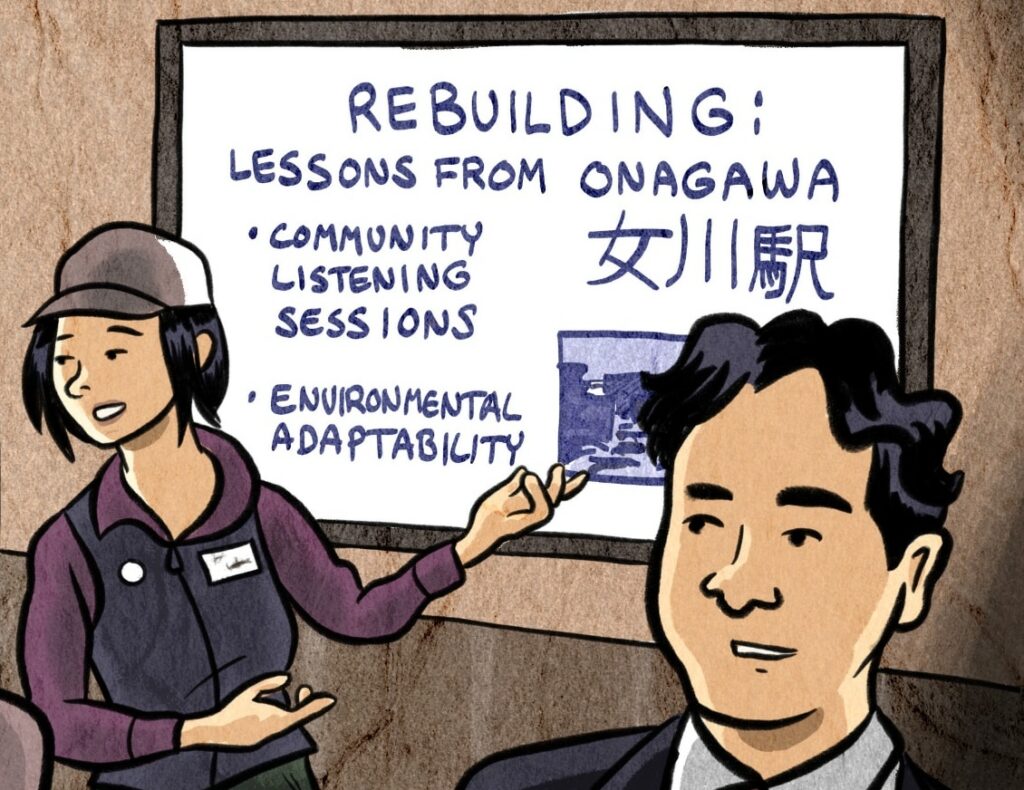 Editor’s note: Bob Stilger shared his experience in Japan after the triple disaster of 2011 for a live audience during Transition US‘s Regenerative Communities Summit. A slightly edited transcript of his presentation is available below and you can also listen to him tell the story himself on The Response podcast. Bob is the founder of NewStories and author of the book, “AfterNow: When We Cannot See the Future, Where Do We Begin?”

It’s delightful to be here with all of you. We started New Stories in 2000, started it right after the — all of the work around Y2K when it was clear to some of us that what was really going on was we needed a new story — that the old story was broken. We needed some new ways of making sense and finding meaning in our lives. And New Stories was created to work with people and communities that wanted to discover those new stories. You know, I never expected to be a disaster guy. Furthest thing from my mind. But what we’ve noticed at New Stories more and more is the space that is created for new stories when disasters happen.

Now I want to share two stories — not too surprising. The first comes in Japan just about two weeks after the disasters. I wasn’t there at the time, but I was there very shortly after. And we’d been planning a meeting of people from businesses in Tokyo who knew that they needed innovation, and we were introducing a model around future centers. We almost canceled it. The air in Japan was so heavy. But then we said, actually, it’s probably more important now than it ever was to have this gathering. And because it’s Japan. You know, people arrived because they said they’d be there. They came in like they were walking through molasses. No one wanted to be there. No one had talked with anyone about what had happened with themselves with their family — anyone else. But they were there. And so we started with this just really tight atmosphere.

Three hours later, the room was Waikuku, which in Japanese means just filled with excitement. And I’m going, what the hell? This is so different than three hours ago. What’s happened here? And that sensation was so strong that I actually had to step out to the edge of the room and quiet myself to try and sense into what’s going on. And I heard this really loud voice say we have been released from a future we did not want. That was the deepest energetic impact of the disaster. Of course, there was the trauma. Of course, there was the loss, but there was this deep, energetic sense of, I don’t have to do the same shit in the same way that I’ve been doing it my whole life. Something else is possible and that we begin to create that when we come together.

Fast forward. Well, actually, stay right there. Stay right on March 11, 2011. A 9.5 [magnitude] earthquake followed by a tsunami traveling at 50 miles an hour with water more than 50 feet high in many places, slams into the Japanese coast. The next day, the reactors explode. This beautiful fishing village of Onagawa — just drop-dead gorgeous — had the perfect conditions to be totally destroyed. Ten thousand people lost their homes that day. Many lost their lives. The mayor of Onagawa. Like all the other mayors in northeast Japan was over 70. He was a little bit wiser than a lot of them. As he looked out and he said, this is not for me to lead. We need younger leadership.

And he went out and he recruited Suda San, who was a local boy in the national legislature in his late 30s, and asked Suda San if who would run for mayor. Suda San thought about it and eventually said yes. He ran, he was elected in November, six months after the disasters. He came in and he looked at all of the plans that the outside professional planners had come in immediately to create — because this was like one of the biggest points of devastation, visible devastation in Japan. And he looked at him and something didn’t seem quite right to him. So he thought about it for a while, and he went back to the old mayor and said, Mayor, tell me, frankly, what do you think of these plans? And the mayor was very quiet and then eventually he said, frankly, I have some misgivings. Hmm. So he goes out and he talks to other people and says, tell me, frankly, what do you think of these plans? Same response. I have some misgivings.

The plans were basically an adaptation for what Onagawa had been before. So the mayor says, you know, I hate those big town hall meetings because all that happens is people come and yell at each other and they just want to be mad and angry and nothing really happens. So he said, I’m going to just start talking to people. And so he goes around to all of the different emergency housing settlements — Japan within four months and created housing for 300,000 people. And he listens to people. He asks them: what’s important to you? What do you really cherish as we create the city? And gets them talking with each other, and he listens. Beauty and safety are the two key values that come out of those conversations.

The community created that plan. I haven’t been to Onagawa for two years. I mean, hell, I haven’t been anywhere for two years, but two years ago, the last time I was there, those mountaintops were removed and the foundations were being laid for the residential housing. That second area had been created. And one of the most beautiful shopping streets in Japan was already working in Onagawa. That community had started to come together again. But two years ago, two years ago, was eight years after the disaster. The miracle of that temporary housing was indeed a miracle, but temporary housing is not, you know, it’s kind of like trailers. Trailers that weren’t designed to last for eight years. But the people in Onagawa have lived in those trailers for eight years without complaint because they knew the vision that they and their other members of the community were creating together. It was a collective vision. It was what they wanted, and they knew that their patience was required.

And that’s one of the questions. You know, I work really closely these days with people in Paradise, California, where it’s three years out from the Camp Fire of November 9, 2019 — it’s going to take a long time to create whatever is created there. The same is true in every disaster. They call on our patience, they call on our perseverance. They call on our connection with each other to build the communities that we want now. Thank you.

Listen and subscribe with the app of your choice, including:

The Response from Shareable.net, is an award-winning documentary and podcast series hosted by Tom Llewellyn exploring how communities are building collective resilience in the wake of disasters.

Hi, I’m Bob Stilger and I founded New Stories in 2000. I have served in many roles NewStories ecosystem and now, at 72 am devoting my time and energy and

Hi, I’m Bob Stilger and I founded New Stories in 2000. I have served in many roles NewStories ecosystem and now, at 72 am devoting my time and energy and talent to helping us all create new stories which demand social and environmental justice equity and inclusion — new stories which regenerate community. Before founding New Stories, I had spent 25 years as the co-founder and Executive Director of Northwest Regional Facilitators, one of the early community development corporations in the Northwest. We did some extraordinary work that changed people’s lives, but it was not leading to more healthy and resilient communities. I needed new stories about true community transformation. My work at NRF was satisfying, but I felt a deep need to understand what might make enough of a difference to really make a difference. After I left NRF in 2000, over the next several years it grew into four separate organizations. NRF changed its name to Community Frameworks; our property management subsidiary corporation Spokane Housing Ventures became a separate corporation as did our nonprofit capacity building arm, Northwest Nonprofit Resources. Our Family Care Resources division became part of Spokane’s Community Minded Enterprises. All fine organizations doing important work today. But I needed to learn more about resilience and transformation. In 2000 New Stories partnered with Meg Wheatley from The Berkana Institute and Christina Baldwin from PeerSpirit to launch a global leadership initiative called From the Four Directions. I started to come into relationship with the people I needed to learn from. I was drawn more and more into the web of Berkana and by 2004 took on the Co-Presidency of Berkana with Deborah Frieze, succeeding Meg. Our work with From the Four Directions connected the people who, during the first part of the century, went on to create Art of Hosting and the Berkana Exchange, a learning community of people and places around the world committed to building thriving resilient communities. Many of these dear friends and colleagues are now part of our New Stories Social Field. I did extensive work with people in Zimbabwe, South Africa, Senegal, Greece, India, Pakistan, Brazil, Mexico, and Australia during this time, connecting them and learning with them about how to build healthy communities. I completed my doctoral dissertation at the California Institute of Integral Studies, learning with these wonderful people about how to create new movements for a new society. I saw them practicing what I’ve called Enspirited Leadership. In 2010 my world shifted yet again when I was invited to introduce Art of Hosting to Japan. Japan had been a spiritual home since my student days there in the early seventies. For the last five years, it has been my main place of work. Japan’s triple disasters of earthquake, tsunami and nuclear radiation on March 11, 2011, created an irresistible call for me to stand with people in communities in the disaster region to help them create the future they wanted, rather than simply waiting for the government to recreate the past. It has been an extraordinary learning ground. Some of this work is described in a December 2013 article in Society of Organizational Learning’s Reflection’s Journal: Disaster as a Springboard for Resilient Communities. Eiji Press of Tokyo published my book When We Can’t See the Future, Where Do We Begin? in Japanese in June 2015. Mill City Books published AfterNow: When We Can’t See The Future, Where Do We Begin? in October 2017. I am a writer, a thought partner, a systems shift designer. I do a lot of listening. I do some facilitating. I am focused on ways to create new networks and communities of learning and action for those of us dedicated to shifting the old story of power, domination, control and consumpton. My base for my work in the world is right here — www.newstories.org. Please visit my book’s website — AfterNow.Today