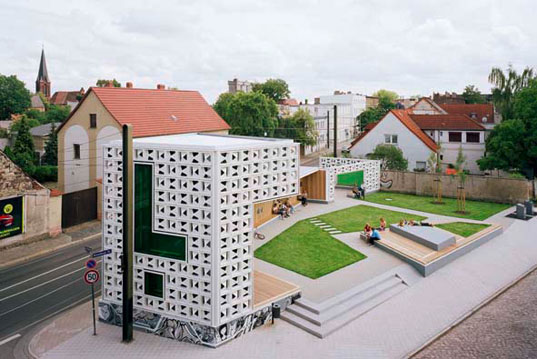 It sounds like the punchline of a joke, but it's real. Inhabitat reports:

What began as an assemblage of 1,000 empty beer cartons pulled together by residents in East Germany has now evolved into an incredible open air public library. Designed by Karo Architekten in collaboration with local residents, the grassroots project revitalizes a post-industrial district in Magdeburg, Germany by creating a cultural center and pop-up library where books are free to take and leave 24 hours a day. Opened this past June, the project introduces plenty of green space and reuses the facade of an old warehouse to beautiful effect.

Libraries and book lending are a great green practices insofar as they encourage the use of shared resources and cut down on crates of pressed tree pulp circulating the globe. They’re even better when they foster a communal spirit of sharing, as does Magdeburg’s new Open Air Library.

The library was built from the ground up with the support and interaction of the surrounding community – first as a 1:1 model made from beer cartons and later as a finished project with the help of Karo Architekten, who incorporated parts of the facade from the city of Hamm’s demolished Horten warehouse. During its entire planning and construction period the library accepted book donations, which are now available to borrow any time of day without a membership – simply walk up to a cubby and pull out a tome.

In addition to its book lending facilities the Open Air Library also introduces a burst of green public space to a post-industrial district. The grassy plaza features a reading cafe and a stage that hosts elementary school theater plays, public readings, concerts, and other cultural events. 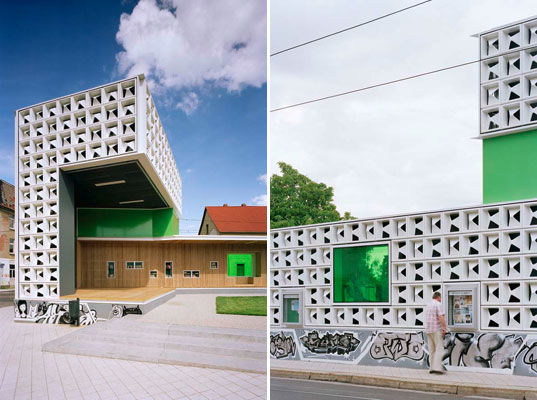 You can learn even more about this project at ArchDaily.