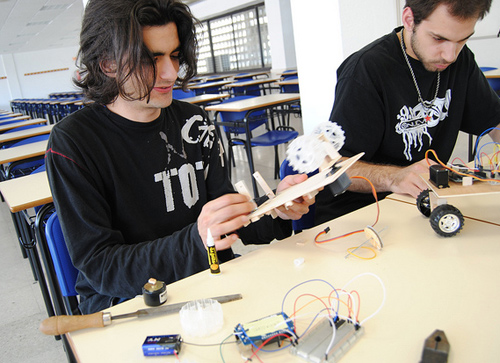 In February, Thingiverse user AphoticJezter, designed and 3-D printed a small “Balloon Powered Jet Car.” He then uploaded his design to the site, making the source files available to anyone who wanted to print their own car. Over 200 people have downloaded his design since then. Thingiverse user thehans, added a few features including a lip on the balloon stem and “sweet rimzzz” and made his version available to the community. Several hundred people have downloaded this modified version of the car. Presumably people will continue to tinker with, print and share variations of the original design. This is how it works in the open source hardware community where the goal is not ownership, but innovation and inspiration.

“The Open Source Hardware Association was started because there was really nothing that was under one roof,” says OSHWA president Alicia Gibb. She explains that there was a need for the community to have a bigger voice, and one that wasn’t tied to any one company. Her vision is to position OSHWA as an organization that supports makers and designers and educates the public about the advantages of open sourcing designs.

Conventional wisdom says that if you create something innovative, you lock it down with copyrights and patents so that no one else can take your idea and sell it. The open source hardware community provides an alternative to that way of thinking, encouraging the open exchange of ideas and designs.

“When you get a patent, you have to open up everything that you do,” says Gibb. “You basically have to open source your design and show the world how you’ve done it. But with patents, you get 20 years of exclusive rights along with that and that’s where open hardware differs.”

Michael Weinberg, senior staff attorney at Public Knowledge and liaison between the open source hardware community and D.C. legislators notes that this technology is moving so quickly that spending time in litigation isn’t productive for anyone. “Almost no one has bothered to get patents on the objects that are coming out of 3-D printers,” he says. “The community is coming together and saying, ‘We can’t do that, we don’t want to do that, it’s expensive and it’s not very efficient.’”

But if things are free and without intellectual property restrictions, a question arises: how can anyone ever make a name, or a career, for themselves?

Rather than getting bogged down in intellectual property issues, the community has turned to a reputation system that enables designers and makers to find out where a design originated, who has made derivatives of it, and what they’ve contributed. This forms a chain of derivation that links back to the original designer.

“You’re looking at people who are interested in building a reputation for quality or innovation or weirdness or whatever it is they’re interested in being associated with,” says Weinberg. “Finding a way to say, ‘This is the person who came up with this innovative idea,’ and making sure that it’s traceable back to the original person, even if its being copied and spread all over the place, that becomes really important.” 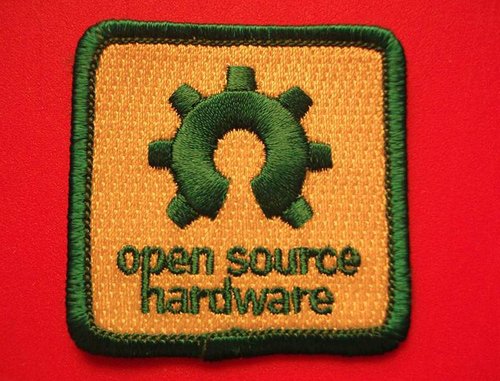 Photo by Moushira. Published under a Creative Commons license.

In a globe-spanning digital culture, having a reputation for innovative thinking and quality designs can be a gateway to a career. Companies are looking for designers or creators and the work that people are doing in the open space becomes their credential. Or, if the goal is to manufacture or sell an open source product, numerous companies including Adafruit, MakerBot, Sparkfun and Liquidware have proven that open source hardware can be profitable.

Working in the open space also allows projects to evolve in ways, and at a rate, that they couldn’t in a closed environment.

“When you give something away, you aren’t just giving it away,” says Weinberg. “When you build an open source project, you’re really inviting the community in and there are a lot of advantages to that: it gives you an entire community’s worth of intelligence to improve it and make it better; they can do it faster than you ever would be able to do; it brings in a whole universe of people who are invested in the project; and it can improve without your input.”

Gibb adds that the open model is an effective means of driving innovation and acknowledging great designs. “If your design is really amazing,” she says, “you’re going to continue to thrive underneath your competition because it’s the best design out there.”

This idea, as radical as it may seem, is not a new one. There are several creative industries, including fashion and cooking, that don’t have a lot of intellectual property restrictions. And the open source software movement, which has existed under different aliases since the 1980s, has proven the viability of the model. Software projects including Firefox, Android and WordPress are built on the open source, reputational model.

As open source hardware designers and makers share and build upon each others’ designs, reputations are solidified. While designs can be downloaded and built by anyone, the reputation some companies have earned for the build quality of their products has enabled them to sell products around the world.

The Arduino project, which is an “open-source physical computing platform based on a simple microcontroller board,” is a prime example of this model. Arduino boards take input from a variety of sensors and translate the input into physical output to make interactive objects. The boards have been used to make an enormous variety of objects including a turn signal biking jacket, an automatic coffee roaster, a touchpad tic-tac-toe board and thousands of other projects. 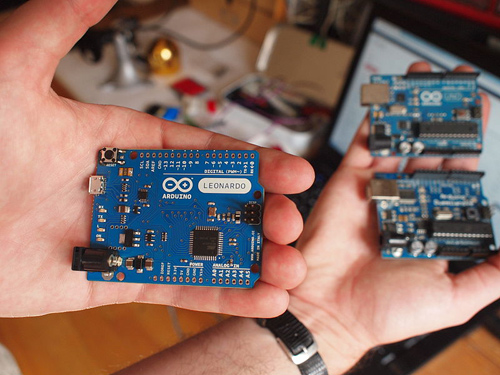 Photo by Becky Stern. Published under a Creative Commons license.

In the open source community, Arduino has earned a reputation for quality and for championing the open source hardware approach to development. Anyone can download Arduino files and freely modify the design to suit individual needs. The files are released under a Creative Commons Attribution Share-Alike license, which allows for personal and commercial derivative works, as long as Arduino is credited and derivatives are released under the same license. There are a lot of “Arduino compatible” products out there, but only Arduino is allowed to put its logo on an object. And if the Arduino logo is printed on a board, it’s an assurance of quality based on the weight of the company’s reputation.

Weinberg points out that the approach doesn’t work for everything, but that that is no reason to dismiss it as a whole. “It might not make sense to release a 200 million dollar movie with a Creative Commons license,” he says, but that “doesn’t mean that there is no place for that license in the world. Just because there are situations where open source hardware doesn’t make sense [it] doesn’t mean there aren’t situations where it does make sense.”

Existing outside of the traditional business model, the open source hardware movement provides a glimpse into a new way of thinking about innovation. “For a lot of people, this first contact is kind of mind-blowing,” Weinberg says. “That this is a sustainable business model takes a little bit of explaining to people. And it’s up to the community to prove that it is a viable model.”

He stresses that sharing is the basis of the open source community, and that by recognizing innovators and building on each others’ work, the community is strengthened and innovation is accelerated.

“What’s driving open source software and hardware is the idea that sharing isn’t just a nice thing,” says Weinberg. “It isn’t just an end that we should all aspire toward as a moral thing or a community thing. By sharing,” he continues, “we actually make things that are better. It’s actually a technically superior way of doing things.”