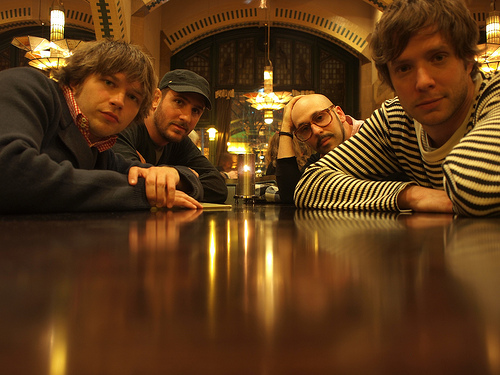 Their work brought to mind an op-ed in Friday's New York Times, in which Damian Kulash of the band OK Go explains the financial impact of music industry efforts to limit video-sharing:

In 2006 we made a video of us dancing on treadmills for our song “Here It Goes Again.” We shot it at my sister’s house without telling EMI, our record company, and posted it on the fledgling YouTube without EMI’s permission. Technically, this put us afoul of our contract, since we need our record company’s approval to distribute copies of the songs that they finance. It also exposed YouTube to all sorts of liability for streaming an EMI recording across the globe. But back then record companies saw videos as advertisements, so if my band wanted to produce them, and if YouTube wanted to help people watch them, EMI wasn’t going to get in the way.

As the age of viral video dawned, “Here It Goes Again” was viewed millions, then tens of millions of times. It brought big crowds to our concerts on five continents, and by the time we returned to the studio, 700 shows, one Grammy and nearly three years later, EMI’s ledger had a black number in our column. To the band, “Here It Goes Again” was a successful creative project. To the record company, it was a successful, completely free advertisement.

Now we’ve released a new album and a couple of new videos. But the fans and bloggers who helped spread “Here It Goes Again” across the Internet can no longer do what they did before, because our record company has blocked them from embedding our video on their sites. Believe it or not, in the four years since our treadmill dance got such attention, YouTube and EMI have actually made it harder to share our videos.

A few years ago, reeling from plummeting record sales, record companies went after YouTube, demanding payment for streams of their material. They saw videos, suddenly, as potential sources of revenue. YouTube agreed to pay the record companies a tiny amount for each stream, but — here’s the crux of the problem — they pay only when the videos are viewed on YouTube’s own site.

Embedded videos — those hosted by YouTube but streamed on blogs and other Web sites — don’t generate any revenue for record companies, so EMI disabled the embedding feature. Now we can’t post the YouTube versions of our videos on our own site, nor can our fans post them on theirs. If you want to watch them, you have to do so on YouTube.

But this isn’t how the Internet works. Viral content doesn’t spread just from primary sources like YouTube or Flickr. Blogs, Web sites and video aggregators serve as cultural curators, daily collecting the items that will interest their audiences the most. By ignoring the power of these tastemakers, our record company is cutting off its nose to spite its face.

The numbers are shocking: When EMI disabled the embedding feature, views of our treadmill video dropped 90 percent, from about 10,000 per day to just over 1,000. Our last royalty statement from the label, which covered six months of streams, shows a whopping $27.77 credit to our account.

Clearly the embedding restriction is bad news for our band, but is it worth it for EMI? The terms of YouTube’s deals with record companies aren’t public, but news reports say that the labels receive $.004 to $.008 per stream, so the most EMI could have grossed for the streams in question is a little over $5,400.

It’s decisions like these that have earned record companies a reputation for being greedy and short-sighted. And by and large they deserve it. But before we cheer for the demise of the big bad machine, it’s important to remember that record companies provide the music industry with a vital service: they’re risk aggregators. Or at least, they used to be.

To go from playing at a local club once a month to actually supporting yourself with music requires big investments in touring, recording and promotion — investments young musicians can’t afford. My band didn’t sign a contract with EMI because we believed labels magically created stars. We signed because no banker in his right mind would give a band the startup capital it needs.

Record companies, on the other hand, didn’t used to expect that all their advances would be repaid. They spread the risk by betting on hundreds of artists at once, and they recouped their investments by taking the lion’s share of the profits on the few acts that succeeded.

At least, this was all true when we signed our deal in 2000. Today, as the record industry’s revenue model has collapsed with the digitization of its biggest commodities, companies are cutting back spending on all but their biggest stars, and not signing nearly as many new acts. If record companies can’t adapt to this new world, they will die out; and without advances, so will the futures of many talented bands.

You actually can watch “Here It Goes Again” through YouTube, at least for the moment. Here it is:

And here's how OK Go crowdsourced the making of their new video, "WTF?":