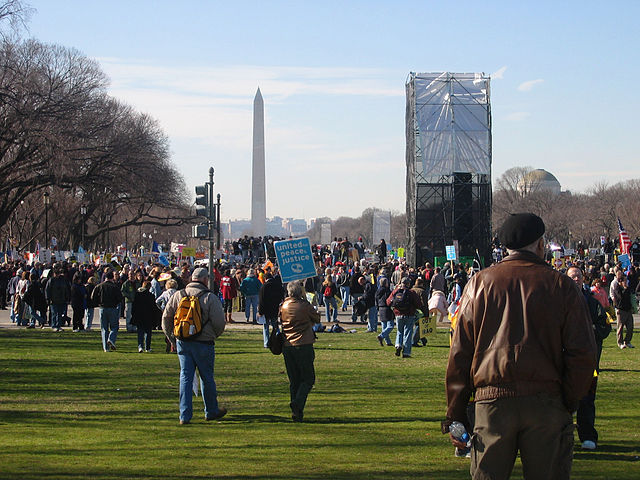 The differences are slight: one decade, one president, one letter out of four. “Change the q to an n, don’t use the phrase ‘WMD’ or ‘pre-emptive strike’”; each incoming Press Secretary should just pass out a style guide. It’s so absurd that the first reaction is a feeling of nauseau, surreality, perhaps madness. Nuclear weapons? State sponsored terrorism? Did we fall into a time warp? Do they really think we’ll buy any of this? It hasn’t even been long enough for the talking heads to turn over: it’s the same crooks delivering the same empty lines On CNN, in the New York Times, on the floor of the House. It’s 2003 all over again.

But Washington DC can be occupied, the plutocrats are served by employees who can strike, and the pundits screaming for Iranian blood are just people in a studio that can be taken over. Recognizing this is part of overcoming that politically impotent mode of expression that defined the left under President Bush: outrage. Outrage, as distinct from anger and rage, has always been a weak political position. Outrage is a reaction, the recognition and/or expression of offense or hurt and generally adresses itself to the people committing outrageous acts. Outrage reflects surprise and shock, which is why outrage can be so easily faked and manufactured to cover malicious intent. “I had no idea the corruption in my office had gotten this far! I’m outraged!” Outrage laughs angrily at Jon Stewart’s mugging, outrage signs a Moveon.org petition, outrage threatens to move to Canada. Outrage is individuated and alienated, it is an expression of the powerless.

The politics of outrage did have one tremendously hopeful moment. In February of 2003, as official, patriotic hatred for Iraq built to an orgiastic frenzy, millions of the outraged appeared on the streets of cities all around the globe, culminating in the largest single day of protest, at least in numbers, that the world has ever seen. But once war began, the movement, such as it was, collapsed. That such a tremendous explosion of popular angst failed to even register with the contemptuous and misanthropic executive would have come as no surprise to a movement with a better analysis of power, nor would it have been a death blow to a movement with a stronger creative impetus than outrage. Rather than manifesting our power, it turned out we were merely registering our offense, ‘voting with our feet’. We were asking the imperial machine not to go to war, and it didn’t even blink. Defeating outrage is as simple as ignoring it.

We can’t relive 2003, and no one outside of the DC bubble wants to. How do we respond to the hawks screaming for war? First, we could emphasize that the media teams, politicians, and commentators act in bad faith, that they lie without remorse or fear of consequence. We’ve seen this all before, the same lies from the same mouths, and, as W. said: “Fool me once, shame on you. Fool me, can’t get fooled again.” As the Obama administration pushes for yet more Middle East adventurism, it should be clear to all but the most stalwart denial artists that, at least in the realm of executive powers and warmaking, there is only an aesthetic difference between Democrat and Republican, between Obama and Bush. Neither voting nor voicing our outrage to our representatives will keep us out of war.

Nor should we debate the Hawks on their terrain. Arguing the possibilities of nuclear weapons or the relative merits of an Israeli bombing campaign is to lose the fight before it begins. Karl Rove’s genius lay in recognizing that by setting the terms of the debate, you could lose every battle and still win the war. The claims made by “security experts” can be outrageous only if we expect them to tell the truth, or consider their arguments objective and non-political. We will not argue about nuclear capacities, threat levels, or the perpetual fear machine’s other hysterical catchphrases.

Instead, perhaps we could say that the Iranian people are our brothers and sisters, that we detest every instance of violence and repression done to them by any regime, theirs or ours. We could point out that the struggles that flared up in 2009 under the banner of the ‘green revolution’, and then again during Arab Spring, mirror and inspire our own, and state that we stand in solidarity with all who battle against tyranny and oppression. We could recognize that the revolving door between Washington and Wall Street also opens on Arlington, VA and the war industry.

The reason that the Occupy movement is as threatening as it is to the powers that be is that it implicitly offers this structural critique. The politics of outrage respond to a particular slight, offense or injury, often to a fait accompli. Occupy moves beyond outrage to a politics of solidarity and creativity. The movement has generally responded to a totality of offenses and injuries not by begging for change from the 1% but by taking the initiative with systemic creativity, demanding nothing except the new world we are working to create.

If the Obama administration decides it needs war with Iran to line its pockets and stuff its ballot boxes this election year, it may well have it. But as the warmongers gather again into their huddle, we would do well to reject, once and for all, the politics of outrage. We are angry, certainly, but we are not shocked, not offended, not surprised. We’ve seen this show before, and while the 1% gathered in Washington may insist on repeating the past’s mistakes, we are not nearly so foolish.