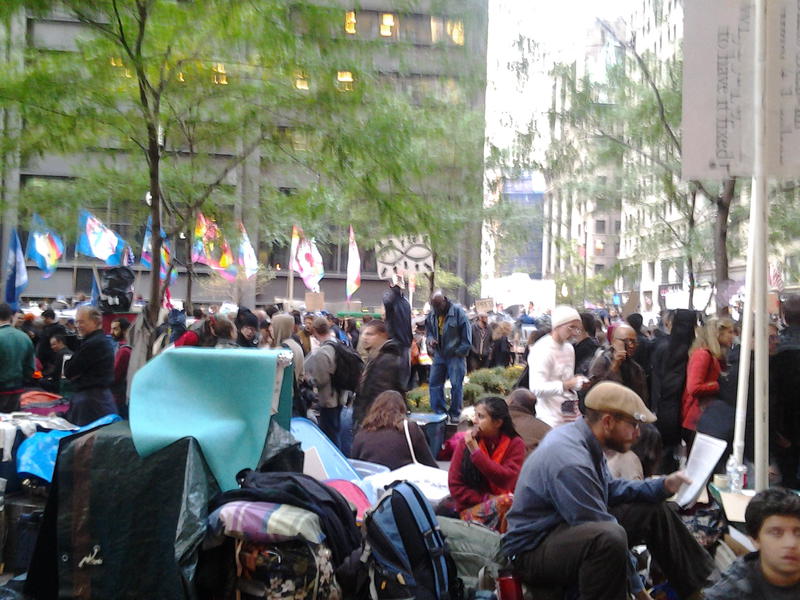 I went to Zuccoti Park on Saturday, October 22 to participate in Occupy Wall Street with the little time that I had as someone with a family, a mortgage, who is also managing a startup nonprofit. I was in New York for a short stay to attend Contactcon and help promote Shareable's upcoming event ShareNY.

I went down the park with my friend Lazlo from Budapest who was intensely interested in Occupy as a meme. We had intended to do a little research to explore Occupy as what he called a "memetic creature". Roughly what that meant to him was to understand the strengths and weaknesses of the central themes of Occupy. That proved impractical with the time we had, but the idea stuck in my head that I'd come home with an impression to share about Occupy.

As we headed to the park on the subway, Lazlo commented on Occupy stories from a fresh copy of the New York Times. There was a story that quoted a Tea Party activists and Senate candidate saying that Occupy protesters were, "unemployed, uneducated and uninformed.” It seems everyone had an opinion, I wanted to see for myself.

When we arrived on Wall Street, I was startled at what the police had done to control the environment. The sidestreets next to the park where barracaded. The flow of pedestrians was heavily controlled the way they are at airport security checkpoints. This had the strange effect of quieting pedestrians. It was like walking in a church, all quiet in obeyance to a higher authority. There were mounted police, which seemed absolutely silly to have there unless you wanted to intimidate people.

We actually got lost for about 20 minutes looking for the park. We felt a little silly for getting lost on the way to the revolution. Lazlo suggested we ask a cop for directions. We laughed. He opted to ask the clerk at a newstand instead. That helped, but thinking back I don't think it was an accident we had trouble getting there. The barracades restricted our ability to move freely and explore.

When we finally got to the park, it was even more controlled. The whole park was surrounded by barracades. It felt as if the police where tyring to choke the movement. In fact, I felt choked. When we actually got in the park, I felt better but it was very crowded. Thankfully, everybody I encountered was friendly. I felt welcomed. We roamed around the park to take it in. It was a lively scene. I saw teach-ins happening, educational material being passed out, a table for free cigarettes, many who were going about their daily routine as campers, a donation table (I gave $20), and a drum circle when we arrived at the far end of the park.

There we met up with some friends who had also attended Contactcon. We chatted trying to make sense of it all, but then reverted to talk about what was happening in each of our lives. After the chat exhausted itself, Lazlo and I headed back with our friends to the other side of the park where the General Assembly was just getting started. We participated for about an hour, and then left to find a meal together.

It was anti-climatic to say the least. I left not knowing what to think about Occupy. Not to mention that I felt like a total tourist. And I had nothing to say that hadn't already been said before. This went on a couple weeks. I just sat on the experience, a sidelined melancholy suburban revolutionary.

That changed yesterday. I started to feel that the nothingness was the message. That the openness, the undefined and emergent nature, the lack of or multitude of demands, and that my own unmade mind about it was an invitation to participate, to help shape the movement and to make a contribution in my own way. No one has a monopoly on its meaning. No one is telling me what I should do. There is no button on a web page that says, "Take Action!" The movement, like the blank field of a search engine, is asking me what I want to learn and what I want to do. It trusts that I know.