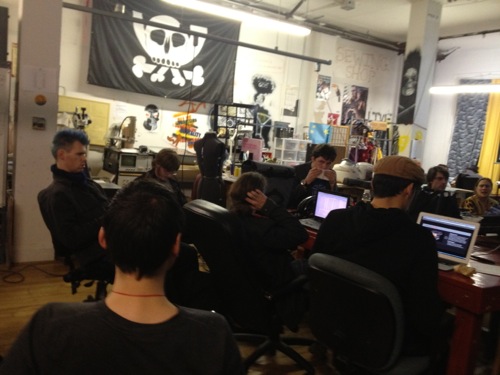 It’s a Tuesday night at Noisebridge, and the place is a mess. The San Francisco hackerspace is packed with people, and overflowing with parts and projects. There are two meetings in session, someone’s running a band saw in the wood shop, and various savants are clustered around computer screens and circuit boards, brows wrinkled and stroking their chins. 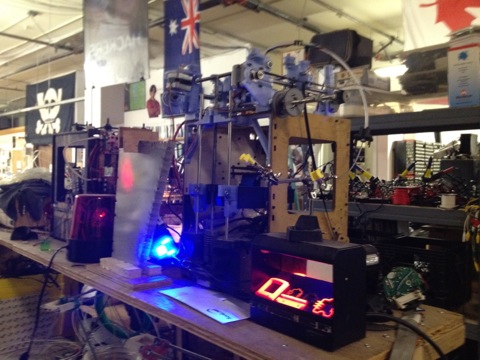 Guided only by a fundamental code of conduct — “Be excellent to each other” — the community has built an independent creator’s space governed by consensus and thriving on independent action.

Noisebridge has expanded, too, after outgrowing its founding space in three months, and moving to a former garment factory three floors up from the taquerias, pop-ups and termite galleries of Mission and 18th streets. As a nonprofit, it’s self-financing on dues and donations, and otherwise flourishes on participation, of the 24/7 variety. “Many interesting things are happening at all times,” notes the house wiki.

This being a Tuesday night, the weekly membership meeting is the main event.

Despite being a complete stranger, I’m immediately welcomed. Within moments, a fully engaged fellow (Robert) accosts me, and offers an instant overview of what’s happening. When I plop down on the floor to type out a note, he rolls up a plush boardroom throne, surely salvaged from some belly-up dot com. Not long after I’m offered a beer, by another stranger who just became a member.

People are talking, listening, tapping on keyboards, huddling around video monitors. Hollers and gleeful cackles emanate from the back. There are spare parts and projects in process everywhere: wires, cables, hydraulics, armatures, gears, circuitry and blinking LEDs. They teeter in heaps, spool off shelves, lurk in boxes and hang from the walls. 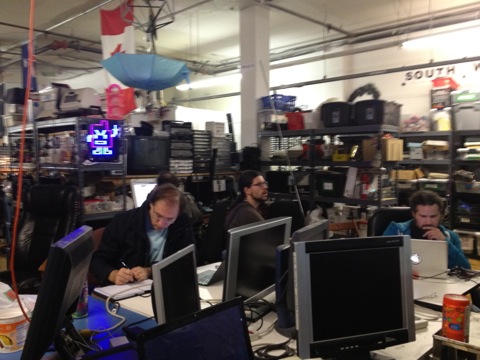 Finding someone “in charge” at a non-hierarchical hackerspace can be challenging. After a week of email spelunking, I turn up a small group of folks willing to discuss this crazy thing they made.

In response to my email questions, member Rachel Hospodar explains, “Coworking spaces that I have been in all seem to be aimed at providing a space for people to work on their own projects, and usually the people there are working more separately. Noisebridge is based on an idea of sharing what you know,” she adds, “which creates its rich environment of cooperation and accelerated cross-pollination.” 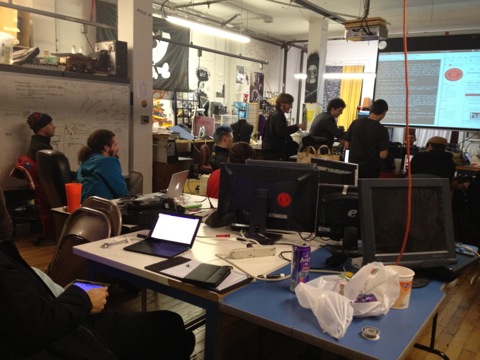 Member Kelly Buchanan is of a similar mind: “Noisebridge is a collaborative space. Sure, coworking happens, but it’s not our express goal. Noisebridge is intended to provide space and resources…for people who have awesome projects. Also, this is not a commercial phenomenon. We’re a nonprofit, and we’re even less profitable than most non-profits.”

Noisebridge membership is a mere $80 per month, with a “starving hacker” rate of $40, and a “doing well” rate of $160. Yet it is also 100 percent open to anyone, anytime, to show up, walk in, and do something interesting, regardless of membership status. At the average coworking space, a nominal fee must often be paid to merely walk in the door, and the full suite of services can hit $500 or more.

So why would someone become a member in the first place, if all this infrastructure is available for free?

“Members can block consensus,” Buchanan notes. “That’s the only difference between a member and a non-member. Membership is only a small part of what you might call ‘infrastructure’ at Noisebridge. Most of what passes for infrastructure is an emergent property of the people currently active in the community, as well as cultural standards which are largely conveyed by word of mouth. We don’t have official rules, we have social pressure to not be a dick.”

• Consensus. Nothing major can be decided without total support from all members present (in person or via proxy) when an issue is voted upon at a Tuesday member meeting.

• Do-ocracy. If you want it, do it. If you can bring anyone with you, better still.

• Be Excellent To Each Other. Or like the lady says: Don’t be a dick.

The pressure is nuanced, too. “Be excellent” doesn’t just mean “don’t be a dick,” Bunchanan notes. “It also means ‘Do awesome stuff’…people who don’t do much in the space seem to get much less leniency from the community if they act like dicks.”

“I’ve been cleaning this place quite a bit,” says one young gentleman, “and I wonder if you guys could help with a dump run to purge the bowels of Noisebridge.”

His comments spark a flurry of replies as the next speaker takes a turn:

“It would be nice to have a Noisebridge heater, it’s very cold here…”

A debate breaks out about whether halogen lights qualify as space heaters, which are banned under the lease.

“You mean we can have 50 soldering irons going but not a space heater?”

It is quickly determined that, absent a space heater, insulated curtains could help. A spontaneous subcommittee is created to procure some. Before the meeting is fully adjourned the project is specced out, the products identified, and $100 is donated for the curtains by members. The process took 20 minutes total. 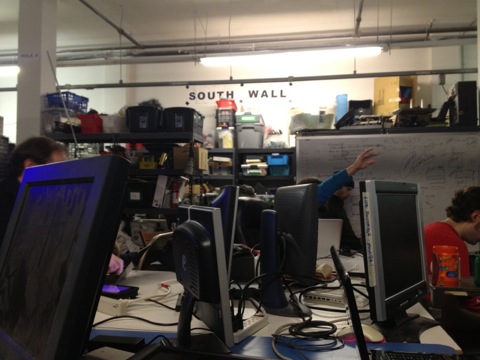 There’s a breathless enthusiasm in the room — a half-dozen sub-conversations bubble up amidst the focused proceedings. Multitasking occurs, ancillary questions are raised, but the topics continually return to a set of core issues: achieving nonprofit status, building secure anonymous distribution networks, and who brought the beer?

[image_7_small_right]Folks from the no-profit Free University of San Francisco request space, to teach classes at Noisebridge. “We provide a free university education,” one member explains, “professors volunteer for us, there’s no tuition required.”

“This is a space of mentoring and trust,” a member responds, “so I think we can do that.” “We’re pretty chaotic, and we’re not going to change that for you,” says another, “but we will provide a space for you where people can come take classes.”

The Free University rep nods. “We had a class on the sidewalk,” he says. “We can do it anywhere.”

Activity swirls around the meeting like a stream around a rock. An old 8-bit video game bleeps and bloops across an enormous LCD monitor. A woman shifts a pile of materials from a shelf to a workbench. A klaxon announces the freight elevator’s imminent arrival. A frizzy-haired older gentleman manipulates pixels and ASCII characters on an old iMac monitor, oblivious to surrouning buzz.

[image_3_small_right] Over on the periphery of this productive chaos sit Leif and Andy, the latter with blue-tipped hair, mildly shaven on the sides, the former in flannel with descending bangs and an understated beard. They are O.G.s, I am told, bearing institutional wisdom, and worth chatting up.

I meander up and ask for some insight on the origin of Noisebridge, and their thoughts on the secret sauce that makes it all come together.

“I mean, seriously,” I say, more than a little dazzled, “this all seems to be working really well.”

“It’s a disaster,” Andy replies happily, rocking back in his seat. “A complete disaster.”

Inspired by German hackerspaces like Austria’s Metalab, the nascent Noisebridgers began to kick around ideas for a space in 2006. It quickly took on a life of its own.

In 2007, a troupe of them flew to Europe for the hacker-spawned Chaos Computer Convention. They attended an English-language panel on hackerspaces, took notes, made connections, and returned home inspired.

“We came back from that very energized,” Andy says. “We started having regular meetings, and we still do.”

“That was one of the design patterns,” he says. “Every day sucks. It doesn’t matter what day you pick, some people won’t be able to make it, so just do it on Tuesday. I believe we’ve had a meeting every Tuesday since then. I’ve certainly not been to all of them.”

“I only started attending after these guys had been talking about it for a year,” Leif adds. “It didn’t seem like a practical plan, it hadn’t worked so many times in the past, why would it work this time?” He offers an understated smile, stating, “I was really, pleasantly surprised at how wrong my cynicism was.”

Therein lies Noisebridge’s beating heart: Working together for the sheer joy of it, making personal commitments to the well-being of the community, not getting in each others’ way, and being excellent to each other. 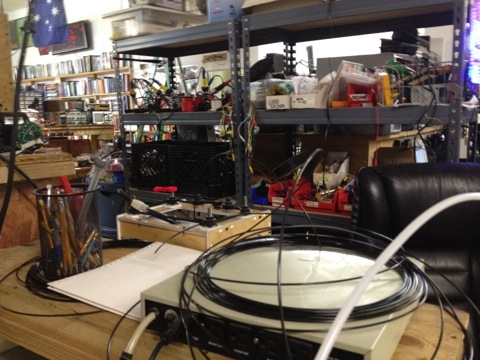 This plays out in a variety of ways:

“And I could just show up, bring some gear, and start doing things? No money down, no membership card?”

“Like, I could come to one of your membership meetings and say ‘I have an uncle in Sonoma, and he has an old die-cut press in the barn. I notice there’s an open corner over there — does anyone have a truck who wants to help me move it down here?'”

“Yes,” they say, almost as one, “but you should not donate things to Noisebridge if you are not willing to see it used to make a giant robot.” 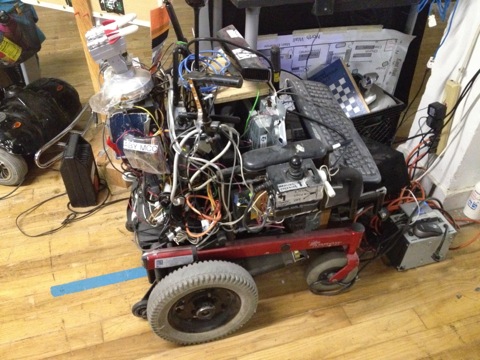 Nodes in an Organic and Emergent Global Network

Noisebridge is unique, but it’s in good company. Over the last few years, “thousands” of hackerspaces have sprung up worldwide, Andy says, each adapted to local conditions and needs, but sharing a common ethos of openness and participation.

It thrills me utterly. In my most blue-sky moments, I envision a new, radically decentralized circuit for materials fabrication, for industrial and technological productivity, for invention and development, for art and culture. Imagine! A mutual-aid “supply chain” of ideas and expertise unsullied by the excesses, abuses and waste of the traditional capitalist assembly line — such as the suicide- and riot-prone Foxconn factories where laborers work inconceivable hours on smartphone production lines.

[image_6_small_right]Empowering civilians is very much a concern to at least some Noisebridgers, who are developing a local node for the worldwide Tor network — a sophisticated Internet routing system that enables anonymous online communications.

“It’s very much a civic enterprise,” says Andy of the Noisebridge Tor node. “A way for us to enable free speech and circumvention of censorship regimes.”

Like a party on the playa at Burning Man, Noisebridge is endlessly discovering and revealing itself. Like a cluster of Critical Mass bicycles, it’s constantly digressive, flowing through and around traffic jams in search of new routes. You have to see it in action to truly believe it.

It’s worth pondering what it all might become. But don’t get too Big Picture. The magic is in the details: in the perpetually iterative, individualized-yet-collaborative process of doing, inspiring, learning, and making anew.

“I think that Noisebridge is a great example of one group of people making happen the thing that they wanted to see happen,” says Andy. “That can happen for anyone, but it won’t happen the same way.”

I'm an award-winning editor, journalist and producer covering people, places and public affairs.My background includes writing, editorial and production work in print, online and on the radio. I also have

My background includes writing, editorial and production work in print, online and on the radio. I also have a parallel career in nonprofit development and entrepreneurship.

Your comments on journalism and democracy are welcome on my blog, Illuminated Media.

If you like a good yarn, I also edit The Fabulist Words & Art in print and online editions, featuring tall tales and fantastical art by diverse hands.