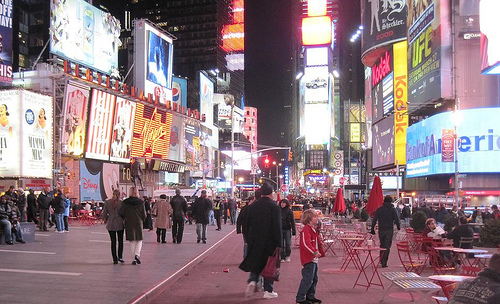 A controversy over sharing has erupted in the streets of New York. At issue are the streets themselves—and whether vehicles should share them with pedestrians and bikes.

New York is America’s least auto-dependent city—more than half of all households do not even own a car  (75 percent don’t in Manhattan).  And the city is nearly flat as a pancake.

So New York ought to be a paradise for biking and walking. Well, except for the traffic, which is world-famous for being treacherous.

Yet over the past four years, the city’s death rate from traffic accidents has dropped to its lowest level since cars invaded the streets a century ago—and that includes the lives of motorists as well as bike riders and pedestrians.

The biggest reason for New York’s safer streets is that the city has added 250 miles of new bike lanes, and created popular pedesetrian plazas on Broadway and other streets. Mayor Michael Bloomberg’s transportation commissioner Janette Sadik-Khan has become a hero across the country for showing how streets can accommodate people as well as cars. The rate of bicycling has doubled since she joined the city in 2007, and pedestrians now feel safer getting around.

That should be a cause for celebration, not controversy. Not only is the city safer, it’s less polluted and more livable.

But a minority of New Yorkers who habitually drive or are chauffeured around the city, resent reducing their speeds or losing prime parking spots.  They believe the streets belongs to them, and they don’t want to share them even for the sake of safety.

John Cassidy, an economics writer for the New Yorker who drives a Jaguar, complains that city hall “seems intent on turning New York into Amsterdam, or perhaps Beijing.” (Beijing, by the way, has done all it can to drive cyclists off the streets, while New York is welcoming them. Plus, what’s so bad about Amsterdam?)

While Cassidy simply grouses that he can’t find free on-street parking when driving into Manhattan for dinner, more powerful figures are taking aim at Sadik-Khan in the hopes of winning back more space for motor vehicles.  A group of well-connected Brooklynites, unhappy about a bike lane in front of their swank residences near Prospect Park, is filing a lawsuit to have it removed.  Among the plaintiffs is Sadik-Khan’s predecessor as transportation commissioner Iris Weinhall, who is married to U.S. Senator Charles Schumer.

Congressman Anthony D. Weiner, who makes no secret of his desire to become the next mayor, recently told Bloomberg, “When I become mayor you know what I am going to spend my first year doing? I’m going to have a bunch of ribbon-cuttings tearing out your [expletive] bike lanes,” reported the New York Times

The media—especially the New York Postand television stations, but also at times the Times, has reported on this controversy as a popular uprising against heavy-handed government interference in the lives of everyday citizens. Sadik-Khan charges hard toward her goals of transforming the city, yet as prominent New York transportation blogger Aaron Naparstek points out on Citiwire , most people support her vision.  A survey conducted by the city council member representing the Prospect Park area found that 78 percent of the neighborhood approves of the “controversial” bike lanes near the park. The new pedestrians plazas along Broadway are favored by New Yorkers 2-1.

“What is it about a program to make New York a better city for transit, walking and biking that so inflames the political class?” Naparstek asks. “To answer that question, one must look at how the political class gets around town. Politicians, press, police and other privileged members of the political class all very often have one thing in common: An official parking placard on the dashboard of their personal vehicles”—which guarantees free parking, meaning they rarely take the subway, bike or walk.

Even the Economist magazine, not noted for its antipathy toward those with wealth and power, has criticized bike lane opponents  like economics writer John Cassidy. In looking at the issue from a strictly economic angle, apart  from environmental or livability concerns, the magazine’s blog concludes, “It seems quite sensible to allocate a larger share of New York’s roadways for cyclists.”