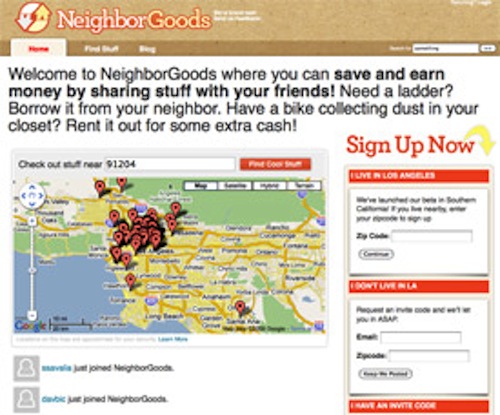 The really quite awesome Good magazine reports a new sharing project on the block:

NeighborGoods launched last week in Los Angeles as an online community that allows people to freely share, borrow, and lend the things they already own with the other people in their neighborhoods.

The inspiration for the project came to Micki Krimmel in 2007 after she met the people behind Free Cycle, the organization that facilitates gifting and reuse around the world. Having previously worked on the social media campaign for An Inconvenient Truth and as a writer for WorldChanging, Krimmel was compelled to create a business that didn’t involve building and selling things that people didn’t really need.

“I’m a big fan of services that help keep things out of landfills and get more use out of stuff,” she says. “But I wanted to approach the problem from the other side, by getting less stuff actually produced and put into the consumer system to begin with. The way to do that is by decreasing demand and just by giving people other options when they need something. We don’t all need to own a power drill or a ladder or lawnmower. Right now, the easiest way to get access to that stuff is to buy it. And I’m trying to create an alternative to that.”

NeighborGoods, which Krimmel describes as a “safer, friendlier Craigslist,” uses mapping and social networking features to facilitate easy usage and assure that borrowed goods get returned: In the event of, say, an unreturned umbrella, a lender could hit the “panic button” on the profile of a truant borrower, which alerts other users of his or her delinquent status, making it essentially a user-policed system.

Eventually, if the Los Angeles launch is a success, NeighborGoods appear in cities across the country, and will charge fees for pro-accounts—for people who want to use the service to make money. All sharing, however, will remain free of charge.