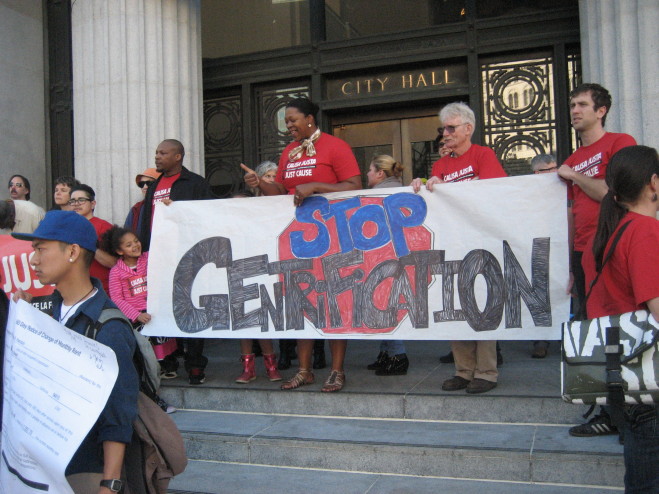 Recently, Causa Justa::Just Cause (CJJC) released a report titled Development Without Displacement: Resisting Gentrification in the Bay Area. The 112-page document, prepared in collaboration with the Alameda County Public Health Department, goes beyond describing the public health implications of gentrification to proposing steps that cities like Oakland can take to stop displacement of historic residents.

“Because gentrification is an issue that crosses various different kinds of aspects, you actually do need a variety of policy strategies,” said Maria Zamudio, San Francisco Housing Rights Organizer with CJJC. “There is no silver bullet to take on the housing crisis.”

“Right of first refusal” and “reparation and return” policies would allow residents displaced by habitability issues or urban renewal the opportunity to return to their former homes. A “No Net Loss” policy would “require all affordable units lost through renovation, conversion, or demolition be replaced within the same neighborhood if possible and within the same city at a minimum.” Public data on civic investment and demographic changes by neighborhood would highlight areas of neglect and displacement where resources are most needed.

The report advocates against the market-driven planning process that is the norm in cities throughout the Bay Area. Instead, it suggests, cities should invest in affordable housing through Community Land Trusts and Limited Equity Housing Co-Ops and levy taxes aimed at making real estate speculation less attractive to investors.

“Policy fights need to be organizing opportunities,” said Zamudio, highlighting another recommendation: to bring affected communities into the process of preventing their own displacement. “Our policies are never going to be visionary enough to take on the problem,” she said, without input from “the most impacted residents of neighborhoods” experiencing gentrification. 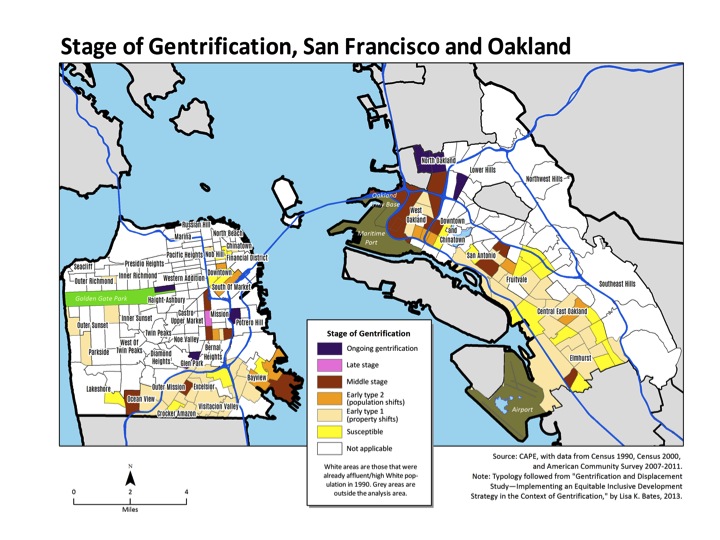 Some of the proposals in the report are already being implemented in other cities. San Francisco is listed as a model for a number of the proposals. Yet displacement is, if anything, a bigger problem in that city than in Oakland. “We’re seeing a compounding of impacts,” said Zamudio. “Planning by the city has been in line with changes that the speculative market wants.” She noted that demographic shifts, as working class residents are pushed out, compound the problem by raising the median income and, with it, the threshold for affordable housing. “The income of the city is unbalanced,” she said, which leads to increasing challenges in finding housing affordable to working class residents.

“Money shouldn’t dictate how much power people have in land use developments,” Zamudio said, adding that community investment should also have value.

Clark sees several opportunities to put these policy recommendations into practice in Oakland, starting with keeping the pressure on the city council to make sure the proposed rent control changes which strengthen tenant protections, is approved when it comes before the council on April 22 and May 6.

In May, CJJC will begin a campaign to put an ordinance on the November ballot that will go after some of the strategies landlords use to get around just cause eviction laws: allowing units to become uninhabitable and harassing tenants. “This is a problem that the city knows about,” Clark said, noting that landlords may threaten to call the police or ICE if tenants complain about unhealthy living conditions. “We believe some protections need to be put in place to punish landlords that do this.”

The ballot measure would institute fines for failure to maintain habitable rental units and for threatening or harassing tenants. Pointing out that 90 percent of Oakland’s housing stock was built prior to 1978, Clark said the aim of the proposed law is “making sure that people can stay in the places where they live now.”

“There has been a significant shift in who owns properties, especially in heavily gentrified areas,” Clark noted. The rise in investor ownership of previously owner-occupied properties has lead to more rentals in Oakland that aren’t covered by the tenant protection laws. “This would be a significant piece of legislation to protect all tenants and not just tenants covered under the rent stabilization law,” he said.

“As we legislate against a problem, we’re never going to legislate a complete solution,” Zamudio said. “Policy interventions will always have loopholes and the market with continue to shift to find ways to make a profit.” This is why, she added, organizing and strong community involvement are crucial.

Get a copy of the full report here.

Laura McCamy is a freelance writer, artist and paralegal . In addition to Streetsblog, her pieces have appeared in Momentum Magazine, the San Francisco Chronicle and OaklandLocal.com. When she's not

Laura McCamy is a freelance writer, artist and paralegal . In addition to Streetsblog, her pieces have appeared in Momentum Magazine, the San Francisco Chronicle and OaklandLocal.com. When she's not writing about bicycles, she's riding them. She was the 2009 Alameda County Bicycle Commuter of the Year.