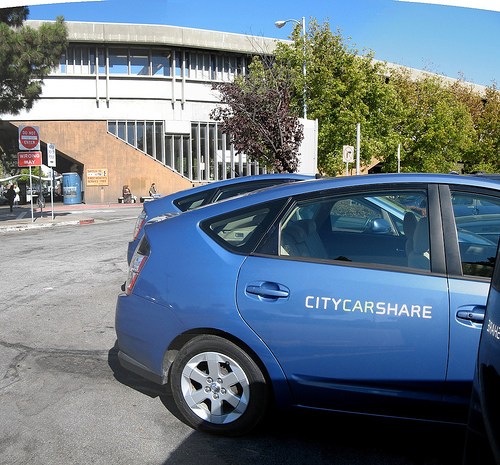 In "Would You Share Your Car with a Stranger?" Kim Gaskins identified insurance concerns as a major obstacle to the growth of new peer-to-peer carsharing services. Today, we hear from the redoubtable Streetsblog that there is an effort (co-led by Sunil Paul, one of the people Gaskins interviewed) to eliminate that obstacle:

"The idea is to make it possible for people to participate in car-sharing programs," said Assemblymember Jones. "This is part of a package of approaches that look at ways we can engage insurance companies in a positive way to encourage better environmental behavior."

If successful, personal vehicle sharing could expand the car share model to regions poorly served by transit, offering those who don't want to own a car or those who can't afford a car the ability to be mobile. It might even alter the national narrative of personal car ownership, say proponents, shifting the way consumers view cars, so that vehicles are less extensions of one's personality and more about getting from place to place….

Paul, who made a fortune in anti-spam software, became interested in personal vehicle sharing after completing research for the Gigaton Throwdown, a project that asked whether the U.S. could scale up clean energy solutions and reduce one gigaton of CO2 by 2020.

According to Paul, the Gigaton Throwdown study showed that replacing the entire fleet of gasoline vehicles in the U.S. with electric vehicles was "practically impossible" within a reasonable time frame. "It's very difficult to scale up solutions to transportation problems around climate and energy security," said Paul. "We started looking for opportunities that could deal with transportation problems without building entirely new cars."

While the current bill introduced in the California Assembly would only allow vehicle owners to cover the costs of sharing the vehicle, including insurance and depreciation, Paul hopes the legislature will alter the language so that vehicle owners could actually make more money out of the venture.

According to Jones, the bill will go before the Insurance Committee on May 5th and then to the full Assembly shortly thereafter. He said he has been working with insurance companies to draft the bill and doesn't believe there will be significant resistance.