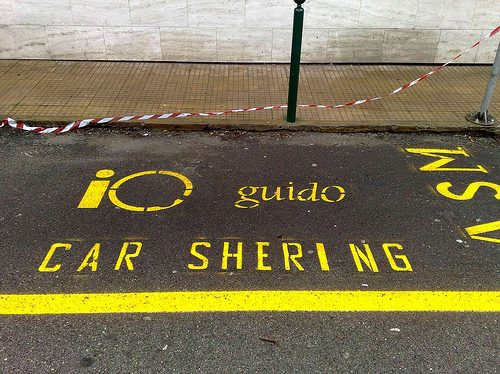 This just in from Sunil Paul of Spride Share. California bill AB 1871 has passed committee on a 7-2 vote with bi-partisan support. It will head to the assembly floor in mid-May.

The bill would enable carsharing services to expand their fleets by allowing car owners to share their cars through their services. The bill would remove the most significant barrier to the growth of P2P carsharing.

The bill is important because P2P carsharing could bring carsharing to the masses, first in California then elsewhere as model legislation is adopted. Traditional carsharing is limited by the large amount of capital and time required to buy, manage, and expand a fleet. In the P2P model, cars and parking are supplied by customers. It's a more scalable model that promises to accelerate the growth of carsharing, and expand it geographically from city centers to suburbs.

Big thanks to the Shareable community for supporting the bill. We will post again when the bill needs support in the assembly. Below is the press release from Assemblymember Jones' office. This is a Jones I hope other politicians try to keep up with.

(SACRAMENTO) – A bill to allow Californians to share their personal cars in carsharing pools was approved by the Assembly Insurance Committee this morning with bi-partisan support.

Assembly Bill 1871, authored by Assemblymember Dave Jones (D-Sacramento), would allow car sharing organizations to expand their fleets by allowing individual car owners to share their car with others through their organizations. Currently, car owners run the risk of losing their personal auto insurance if they share their car. Receiving even a small amount of money for the use of one’s vehicle is treated by insurance companies as a commercial use of the vehicle, thereby invalidating the individual’s private insurance coverage.

”Owning a car can be expensive and vehicle sharing programs are a great way to help connect people with cars when they need them,” said Assemblymember Dave Jones. “I am very pleased that the legislature has taken the first step to make this program possible by passing it through the Assembly Insurance Committee.”

“I am excited that we received bi-partisan support for this money-saving program,” said Sunil Paul, founder of Spride, a company which seeks to provide this personal vehicle sharing program. “I appreciate the Insurance Committee taking this crucial step to removing the roadblock in making this innovation widely available across California.”

The Insurance Committee voted 7-2, with three members absent or not voting, to approve the measure. The bill now heads to the Assembly Floor, where it will be considered in mid-May.

AB 1871 has enjoyed broad support from car sharing and personal vehicle sharing organizations across the nation such as City CarShare, Spride, Gettaround, RelayRides, Go-Op and Divvy.  It has also received support from environmental groups, such as the Sierra Club, Environmental Defense Fund, American Planning Association and Community Action to Fight Asthma.