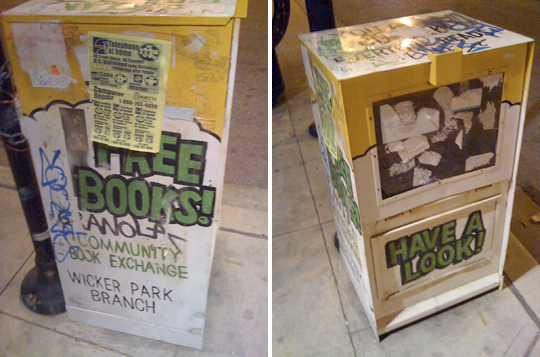 Building a more shareable urban community doesn't necessarily require years of planning and grand initiatives. It can be as simple as turning defunct newspaper boxes or pay phone booths into community lending libraries.

In August 2006, Ryan Duggan commandeered a dingy old newspaper box in Chicago's Logan Square neighborhood, transforming it into the Logan Square Book Exchange. Four years later, the Book Exchange remains, a simple conduit for community engagement. More often than not, there are people leaving books and old magazines, or folks grabbing a book for the morning commute. You're not always going to find a top-shelf selection of quality literature, and you may also discover an empty coffee cup jammed between the tomes.

Still, after four years the Book Exchange hasn't devolved into a dumping ground for books people couldn't unload at a yard sale, as if there is a unspoken community bond of curation. Additional Book Exchanges have appeared in the Chicago neighborhoods of Pilsen and Wicker Park, standing as potent reminders that we're all members of our communities, no matter how disconnected we might feel at times.

The brilliance of the makeshift lending library is in its simplicity. The idea is spreading, most recently to the Los Angeles neighborhood of Highland Park. Artist Amy Inouye has turned an abandoned phone booth into the Highland Park Book Booth, conveniently located next to a bus stop at the corner of Figueroa and Avenue 56. Inouye has taken the idea one step further and given some of the books a Book Crossing serial number that allows people to track where their book donations end up online.

The makeshift lending library is a guerrilla form of community sharing: it's not going to be sustainable in all cases. The Logan Square Book Exchange has been fortunate: the Chicago Reader, owner of the box, embraced the project. Not all institutions will be so generous. But there's little need to repurpose still-operational private property: considering how many unwanted kiosks litter urban areas–the boxes of defunct newspapers, phone booths–just about anything that is publicly-accessible and keeps out the elements will do the trick. Similar to guerilla gardening, Duggan and Inouye's efforts demonstrate a unique, low-impact way to reclaim sites of urban decay and make them useful to the community.

Photo via bethanyshaffer.com and Re-nest.