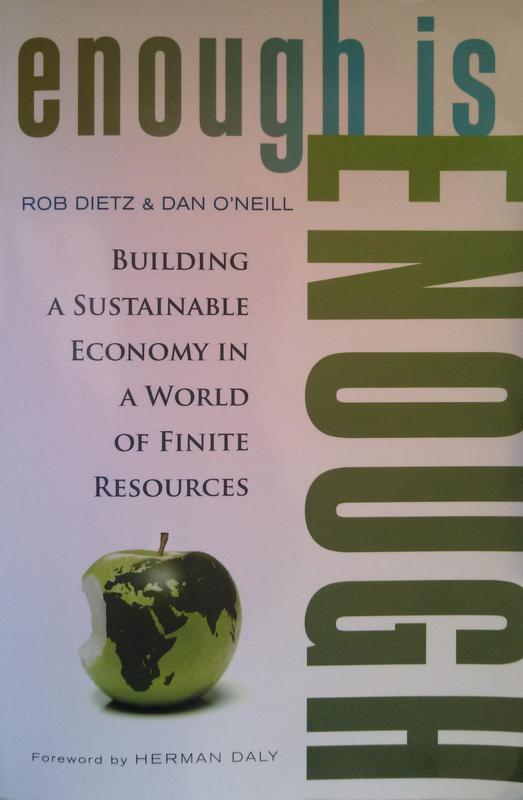 Growing the economy is not only a good thing, but the only thing. This message barrages us daily from the media, Wall Street, and politicians. But wait a minute. Can economic growth continue indefinitely? Doesn’t our biosphere have limited resources? What happens when we hit the downward slope of the earth’s ability to supply for our needs and economic growth is no longer physically possible? Is our attention even on the right area – does endless economic growth really matter to our happiness, our quality of life?

Enough is Enough: Building a Sustainable Economy in a World of Finite Resources, a book written by Rob Dietz and Dan O’Neill, addresses these questions and more. The book kicks off with some sobering numbers:

These numbers highlight the growing shadow looming over the current obsession over economic growth throughout the world. The authors lay out how our current economic approach, which they dub the ‘economy of more,’ is damaging the environment, society, and the economy itself. Their main message highlights the alternative of shifting from an economy of more to an economy of ‘enough.’

The authors point to the need for paying attention to earth’s ecological limits, better indicators of economic progress, and more equitably distributing wealth (which they show results in a more vibrant economy and improves quality of life). They suggest numerous practical actions to move toward an economy of enough, aka a ‘steady state economy.’

It’s an economy in which material and energy use are kept within ecological limits, and in which the goal of increasing GDP is replaced by the goal of improving quality of life.

After an introduction and overview, the central portion of the book contains chapters looking at specific issues with the current economic system, such as resource use, population, unemployment, debt and the monetary system, and consumer behavior. For each of these topics, the authors ask and then answer three straightforward questions:

On the topic of providing for our well-being, the heart of economics, the authors summarize work by The New Economics Foundation identifying five ways to improve well-being:

Beyond the obvious pre-requisite of having enough to provide for basic needs, these actions do not depend on increasing one’s wealth. The economy of enough builds on this wisdom, with the goal of maximizing long-term well-being in place of short-term profits.

This is an important book. A book with such a lofty goal as changing the current fixation on economic growth might appear to be tilting at windmills, Don Quixote style. On the contrary, the authors take a down-to-earth approach as they matter-of-factly acknowledge the real-world challenges facing changing our current economic approach and lay out common sense steps needed to create change.

The authors articulate a clear alternative to the fixation on economic growth in the face of mounting evidence that it is unsustainable. At the same time, their solution also addresses the current issue of the spoils of economic activity increasingly falling into the hands of those who least need it, reducing the current economy’s social sustainability.

Enough is Enough details why Gross Domestic Product (GDP) is poor measure of economic vitality. As Robert Kennedy pointed out, much of what matters is not measured by this often cited economic indicator. The authors point to alternative measures being used by policy makers in countries including the UK, such as the Happy Planet Indicator or HPI. The HPI as of 2005 showed Costa Rica as the country in the number 1 position while the United States was in 114th position (out of 143 countries). Beyond having enough, increasing wealth is not a prescription for happiness.

This book maps out this critical topic in an engaging and approachable way. I found each chapter thought provoking. I came away wanting to act, to be part of the solution.  While filled with facts, data, and pithy arguments, given the topic, the book also contains something unexpected, namely optimism and hope.

Phil Mitchell has expertise managing teams, developing businesses, and directing complex projects. His education includes a BS in Civil/Environmental Engineering from UC Davis and an MBA from UC Berkeley’s Haas

Phil Mitchell has expertise managing teams, developing businesses, and directing complex projects. His education includes a BS in Civil/Environmental Engineering from UC Davis and an MBA from UC Berkeley’s Haas School of Business. His achievements span engineering, environmental management and remediation, business development, alliances / partnerships, marketing, and management. Phil’s leadership roles have leveraged his people-centered management style and business acumen. Phil has held positions at the California Department of Water Resources, East Bay Municipal Utility District, IBM, CH2M Hill, and Four Dads Foods. He is currently volunteering for Shareable.net and working on new food venture. He co-authored a book published by McGraw-Hill: ISO 14000 Guide, The New International Environmental Management Standards. Phil is a registered California Civil Engineer. He has served on the boards of three non-profit Silicon Valley organizations and is a regular participant of the UC Berkeley Entrepreneurs Forum.